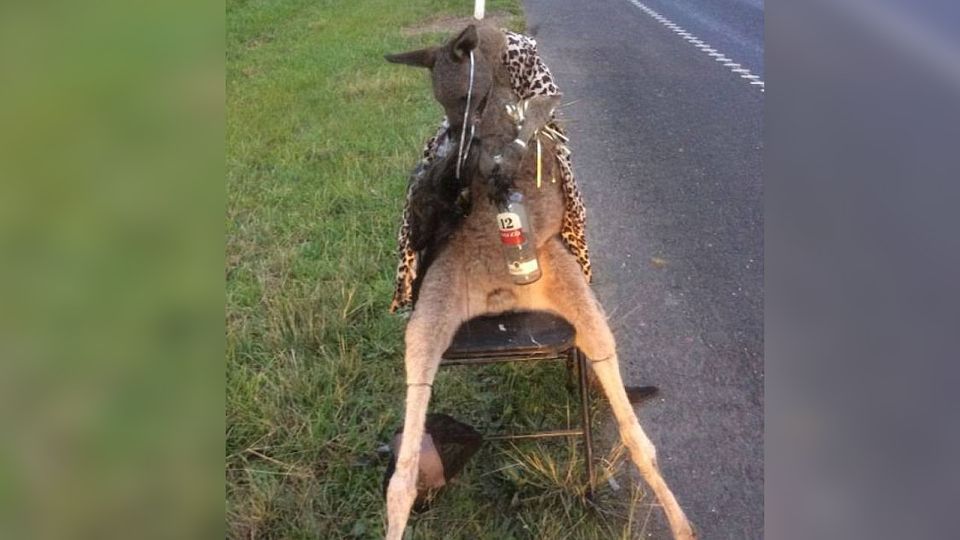 The disturbing image of the kangaroo was shared in hope finding more information. Photo: DELWP

The Department of Environment, Land, Water and Planning released an appalling picture of a slain kangaroo staged in a disturbing position on Plenty Road, Victoria in hope of finding the culprit.

The slain animal that was found to have three bullet wounds, had been tied onto a chair, draped with a leopard shawl, holding a bottle of Greek Ouzo 12.

The Victorian Department described the animal cruelty act that upset motorists on Tuesday as “appalling and immoral”.

“This is appalling and immoral behaviour. The kangaroo had been shot at least three times prior to it being arranged in the chair,” said DELWP Senior Investigator Mike Sverns.

“It would have taken some time to stage the kangaroo in that position on the side of the road. We are certain that someone would have seen something, given the public area and traffic flow of this main road.”

The penalties for killing wildlife range from $7500 to $36,500. If you have any information which could lead to the person/s responsible contact 136 186 from anywhere in Australia or head to https://delwp.vic.gov.au/