As he prepares to pay tribute to one of his guitar heroes, Jack Pantazis talks about his ‘humbling’ experience in music and his recent rediscovery of his Greek background “Jack Pantazis is one of the most underrated guitarists in the country.”

My friend’s words echoed in my mind when I called Pantazis to discuss his latest project, a live tribute to the great jazz guitarist Wes Montgomery.
When I told him what my friend had said he laughed and was quick to dismiss the compliment. His mind is still in a “nerve-racking” space from the previous night: “I had a gig with three guitars, playing with Ryan Griffith and Hugh Stuckey,” he says. “Man, I learned a lot from them last night. It was so humbling, they are beautiful players!”

There, in this description, lies pretty much everything you’d have to know about Jack Pantazis and his approach to music. He is a teacher (he’s been a part of the Melbourne Polytechnic performing arts faculty for 26 years), he talks about ‘learning’; a guitar master ‘humbled’ by the virtuosity of his peers.
A seasoned musician, Pantazis has crafted two albums of original music and has been playing with a series of other talented musicians, most notably and consistently with the Daryl McKenzie Jazz Orchestra, but also with the Carols by Candlelight Orchestra, in which he works alongside his brother, acclaimed drummer Gerry Pantazis. He now has a new venture – a nonet in which they pay tribute to one of the jazz greats, guitarist Wes Montgomery.

“I wanted to push myself to present something different, something that echoes not only mine, but so many other guitar players’ rite of passage, listening to and copying Wes. I thought it was a nice idea to present something to the public. Some may not know who Wes was and others are coming [to the gig] eager to have a listen to this.”

Wes Montgomery is to jazz guitar what John Coltrane is to the saxophone and Miles Davis to the trumpet – a towering figure who defined the sound of the instrument. He was also one of those few jazz musicians who were very successful commercially, recording a series of pop-inclined albums.

“The challenge was to have a whole programme of that material and to present him in both lights, both his ground-breaking jazz period and also his more commercial, pop side, which was also great,” reveals Pantazis. In order to do this, he expanded his regular group to a nonet, adding four horns to play big band reductions of the material.

“We’re fairly true to the forms and arrangements, but we’re not playing note for note, we’re doing our own solos,” he explains.

“This is not a cover band, and I’m not trying to channel Wes, but trying to capture some of the essence of his music, and present it in my own humble way. I think as a growing musician I still treat myself as developing. Every time I go back to a certain player, I always find new things in what that guy did and that is a growth period for me. it might be the smallest thing; some rhythmic or melodic detail that I never saw in the first investigation, so when I go back certain hidden gems are revealed to me and make an impact.”

But what does Wes Montgomery specifically mean to him? “Spirit,” he says enthusiastically. “It means spirit. When he plays, there’s a bit of everything: emotions, humour, life. And to think that he only lived to 45 years of age and that he had to work hard at a factory during the day and then do gigs at night to support his family, his seven children, so when he played, it was all heart. For me, that is what comes across and what makes his music still vibrant.”

This idea of a working musician is something that resonates with him. It is what he learned from his chance to meet with two of his personal heroes, jazz legends Barney Kessel and Herb Ellis.

“I met both through my guitar teacher, Lou Dalla-Riva,” he remembers.

“He was the one who introduced me to jazz and is still a mentor to me. I started guitar lessons when I was 11 years old and studied with him for six or seven years. He opened up my ears, giving me record upon record, and introduced me to a lot of people. I won’t go into details, but it was through my association with Lou that I was able to meet Herb Ellis and Barney Kessel when I was quite young and share a meal and chat with them. It was amazing. I met Herb twice; the first time I was a bit young, I was only 14 – what can a 14-year-old say to Herb Ellis? The second time I was a bit older, six or seven years later. I had my [drivers’] licence, I drove him from his hotel in South Melbourne to a blues club in Bundoora; we had a meal, we spoke and he signed a couple of albums for me. I was impressed by how down-to-earth they both were. There was no complacency, they were extremely humble and hardworking; they taught me that everything that happens is not luck, it is the result of hard work.” 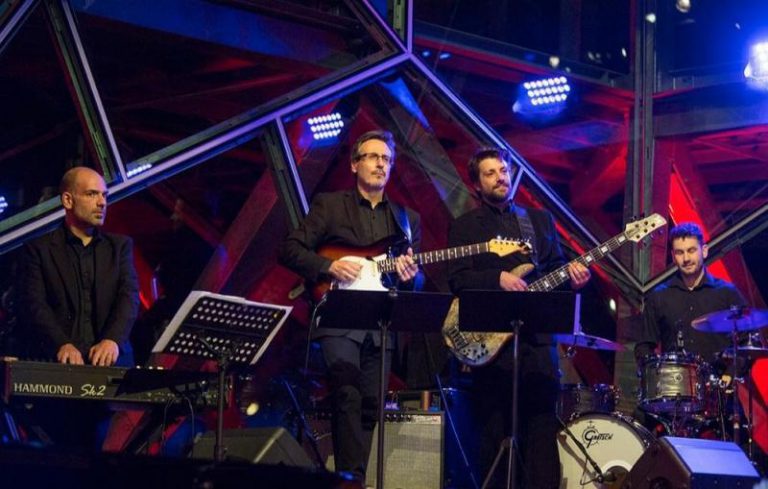 Pantazis did not have to look for such work ethic examples outside of his home.

“My father was a professional piano player,” he says.

“He worked six nights a week to support the family, so we had music always playing at home. He wanted us to learn music but not follow a career in music, because he knew how hard it was. But we’re stubborn and we did it,” he laughs – and then pauses for a while, to add with his trademark humility: “We’re trying to do it. Because we were brought up with Dad working, so for us it is work; it is hard work, enjoyable work, but still, a job is a job – be it a wedding, a christening, a funeral, you play what you have to play. I play in church every Sunday morning; it’s a beautiful thing that I can do this.”

Music is not the only thing that Pantazis learned at home. He is the son of Greek migrants, his father and mother arrived in Australia, from Port Said and Kefalonia respectively, in the mid-60s. He grew up learning the language and culture, but he was “growing well away from it” until very recently.

“Going through life, I needed to make a pilgrimage to Greece and go to Kefalonia where my mother’s patriko still is,” he says.

“It was there that I refound my Greek heritage, and I have to thank my wife, Natassa, for that.” The couple met in Athens in 2013 and were married in Melbourne in 2015. Since then, Jack has reconnected with his background, seeing things through his wife’s eyes.

“The whole Greek thing is amazing to me,” he says.

“Obviously, I don’t like where Greece is at the moment, but even with this much hardship going on, I love the spirit of their people, how their hearts are so open. It is beautiful. It has given me a lot of strength. I love the history and the culture and the music; I’m listening to a lot of Hadjidakis and Theodorakis and I’m also planning to include some of this music to a solo album I’m working on. But my wife, she’s not into Greek music, she loves jazz. How did that work?”

We laugh. And then I ask him if he wants to add something before we wrap things up: “I feel very humbled by people that I work with and play with and I continue to work on things and hopefully continue to make mistakes,” he says. “I certainly made a few last night, they’re on my brain at the moment.”