Immersed in the music of Valerios Calocerinos 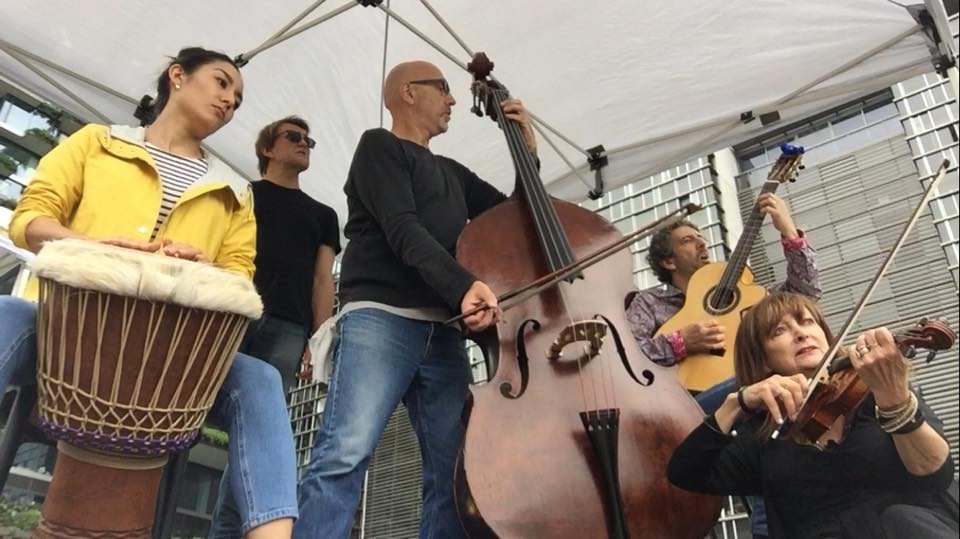 Meet Valerios Calocerinos, a creative mind who once wrote, and continues to write, a Kytherian fiction called The Book Of Vilah and then decided to compose music to his fiction that then evolved into a unique Sydney-based band known as Ionia. The folk rock music delicately incorporated classical guitar, bouzouki, double bass, and violin. The talented musician has been involved with over 30 recordings over the years. Here Valerios talks to Neos Kosmos about his multicultural band, the genesis of the music and his great love, Kythera.

Valerios, the last time I spoke to you was at a performance you held at the Greek Festival of Sydney. It’s good to see you in action again. Tell us about the unique style of music that is Ionia.
Ionia is a mix of many styles and doesn’t really fit into any one genre. It brings together my diverse background as a musician and producer. We have been called Gypsy folk rock but to me this is only a part of what we do, there are elements of classical, alternative, and world genres. Each piece is its own entity and one of my main objectives is to remain totally original.

Why the name Ionia? What did you do before Ionia?
Ionia (as a geographical entity) is/was a really interesting place; small in size, but big in history, philosophy, and art. I often wonder about ancient times, the future and events that are consequential in the present. Years ago I wrote a short story, which became a song, about an ancient Ionian soldier who is reflecting on the war he is fighting, on the children of his opponents, and if the battles he fights will change history or become lessons in the future. He laments and writes poetry for each of his victims as a means to immortalise their bravery and sacrifice and also to question an allegiance that has left blood on his hands. In the larger body of fiction I continue to write this theme is touched upon as a folk tale told to a child about inner peace, mortality, and how the concept of heaven and hell may be either the release or concealment of secrets or thoughts that we take with us at our last breath and how your inner truth may determine if you rest in peace or not. From this came the name Ionia.
We have been playing together for about four years. We have core members and guests come and go. The music was originally written to accompany a fictitious body of work I continue to work on. It’s one of those never-ending artistic undertakings; the story continues to grow; I am constantly exploring the characters further and composing new pieces for them.
I have a number of projects, most recently This Gentle Flow I produced and released the single King Pest (inspired by Edgar Allan Poe) with Greek underground artist Mike Pougounas.
Mike and I have a long history in the Greek underground music scene and have been friends for many years. A lot of my earlier projects, which were in the realms of the Dark Wave genre, were received well in Greece and other parts of Europe. This Gentle Flow performed in Athens in 2010. I have an extensive discography and have also played live with many artists and many genres.
As well as my own projects I have produced a great number of Australian independent bands. I am currently working on a concerto for double bass inspired by the Dutch artist Hieronymous Bosch plus am exploring ways to incorporate a folder full of my grandfather’s short stories and poetry with my music.

Ionia has established a reputation for live performance. What will a punter experience at one of your shows? More importantly, when is the rest of Australia going to see you?
Ionia is a really engaging band, our music reaches out to people from all cultures and walks of life. It is diverse and hopefully represents the world we live in. Our music can be many things, light, dark, pretty, ugly, funny and deep. We take every opportunity to play, from festivals to small venues, our objective is to play because we love to play. We are hoping to get to Melbourne soon and possibly Adelaide and Europe next year for some shows.

Tell us about your discography and the new single, I see from the depth of lyrics there continues to be a journey and a story to the 15th century piece you have written.
When I first started writing music I also wanted to tell stories through it. All my projects have a connection and links, sometimes subtle, sometimes obvious.
Ionia’s new single (which is free at the moment on our website), My Life In A Box tells the story of Domonic, a homeless man who outwardly makes no sense, who takes in the protagonist after finding him washed up on a beach. Befriended, they live and share what they have for many years without a sensible conversation ever taking place. In essence it is a conversation between the two characters with Domonic’s voice finally being heard.

Pedro Courtelis is a fellow Hellene in the band? Who else is playing with you guys?
Yes, Pedro plays classical guitar. He is also half Dutch. Sarasa Mohammadi plays djembe, and she and Pedro are both long-term members. On violin we are really lucky to have Dorothy Sercombe who brings a wealth of experience. Dorothy is one of Sydney’s best and busiest violinists. The vocalist on the single is Roger Stankovic.

Why does Kythera matter to you?
I visit Kythera regularly and I find it a very grounding place. When I am there everything seems to be in perspective. There is a clarity that sometimes gets clouded when you are in Australia. Obviously I have roots there as well and a sense of home resonates with me.
There is something special about being in an environment where there are no distractions or reminders of a world gone mad. [It is] a very beautiful place, the people who live there have a strong sense of pride in their island and keep traditions and history alive. I hope to live there some day.

What next for Ionia?
We are working on new material plus planning another single and film clip. We are aiming to announce some shows for September in Sydney and these will be announced on our website and Facebook page.
We are also looking at doing another show with actor Alex Sideratos this year, we do maybe one a year with him where he performs the dramatic dialog around the music.
Alex has been part of the show since the start and it is interesting, as the writer, to see how over time his interpretation of the main character grows along with the story’s organic evolution.

To find out more about Valerios head to ionia.com.au or valerios.com.au

*Billy Cotsis is the writer of ‘From Pyrrhus to Cyprus Forgotten and Remembered Hellenic Kingdoms, Territories, Entities & a Fiefdom’.