For whom the bell tolls? 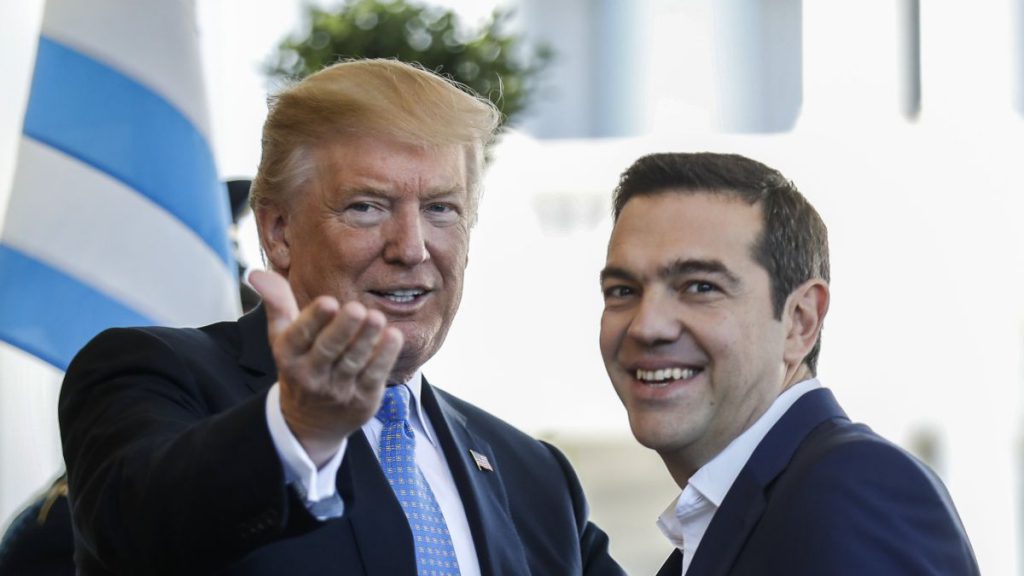 · “We have already eaten the camel and now there is the queue”.
· Truer words have never been spoken.
· Alexis Tsipras made this remark, speaking at the Brookings Institute in Washington after his meeting with US President Donald Trump.
· It was another awkward, cringeworthy moment in the long line of awkward, cringeworthy moments the Greek PM has given us, particularly when he tries to speak English.
· The panel embraced the awkwardness, laughing politely at the remark, which was meant to emphasise the fact that Greece has concluded 80 per cent of its reforms, raising hopes for debt relief. “There is an expression in Greece”, the PM said, educating journalists on the proverbial saying.
· Of course, there are no camels in Greece; and by ‘queue’, Tsipras meant ‘tail’.
· His English teacher should be reeling in horror.
· The actual proverb is: “we have eaten the donkey, and all that is left is its tail”.
· Which is also a bit nonsensical. Who eats donkeys, anyway?
· The truth is though, that nothing can better describe what is going on in Greece than nonsensical quotes.
· Take the upgrade of the transport system for instance.
· Greece has just introduced a new electronic ticket to replace the paper tickets sold by machines.
· But the process of issuing a month-long pass is daunting. In order to freely use transport, passengers need to provide all sorts of identification points, up to their social security number.
· Yes, the system is fearful of ticket fraud and is making sure to eliminate it.
·To be fair, in recent years, there has been a trend of passengers leaving their (paper) tickets behind, once used, for other passengers to use until expiration.
· It is a kind of rebellion, or solidarity, among crisis-stricken citizens who have had enough of paying for a state which treats them with hostility.
· The Ministry of Transport lowered ticket prices, and duration, so that it would be harder for two people to use the same ticket.
· Now you practically have to give away all sorts of private data in order to be able to commute.
· So take that, you terrible ticket offenders!
· Yes, Greece will go to great lengths to let you know that crime does not pay.
· Of course, this is the same country in which a top criminal lawyer, Michalis Zafeiropoulos, was killed in his Athens office, in broad daylight, by two mobsters posing as clients, in what was probably a contract killing ordered from inside the prison, according to the police.
· The horrific incident took place last week and was – predictably – used by the Opposition to attack the government for not being hard on crime.
· This has been part of the Opposition’s rhetoric for a long time now, specifically stressing the ideological ties that bind some factions of the leftist government party with the extremist groups that have been engaging in acts of terrorism in Greece.
· Now, the Opposition has bound everything together – terrorism, petty theft, organised crime, racist assaults on migrants, and kidnapping – into a neat package, claiming that crime is on the rise.
· Which is not true. Official police data shows that crime rates have been declining for years.
· And this has little to do with the crisis.
· In fact, the police have had quite a few achievements to boast recently, not least among them, breaking up the kidnappers ring that held businessman Michalis Lebidakis.
· And the ongoing trial of Golden Dawn raises hope that the Nazi party will be convicted for the criminal organisation that it is.
· Speaking of Golden Dawn, one of the party’s prominent supporters, Kalavryta Bishop Amvrosios also made news last week.
· He ordered churches in his diocese to mournfully ring for a week, in condemnation of the new laws that allow for legal recognition of gender identity.
· Once again, the church ran a crusade against a vulnerable minority, standing up against their rights of self-determination.
· There’s probably a joke about donkeys, camels and queues to be made there.