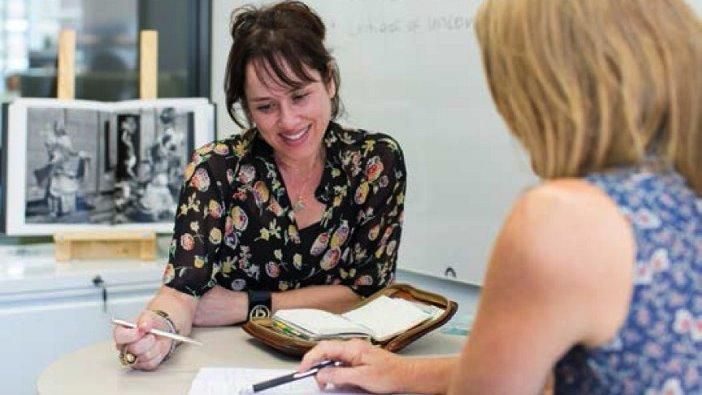 Culturally diverse women are ambitious, capable, and resilient, and well positioned to contribute to their own and their organisation’s success in the 21st century; the benefit of culturally diverse women for Australian businesses cannot be denied. The ‘Cracking the Glass Cultural Ceiling: Future Proofing your business in the 21st century’ report produced by the Diversity Council Australia (DCA) shows leadership teams that are gender balanced and have a greater mix of people from different cultural backgrounds produce greater financial results.

In the rest of that group of 100, Anglo-Celtic men would take up 64 places, another 28 would be culturally diverse men and six would be Anglo- Celtic women.

Dr Groutsis is a senior lecturer in Work and Organisational Studies at the University of Sydney Business School and since the report’s release last month she has been sharing the findings on media platforms such as Triple J, SBS Greek Radio and SBS Television.

The report was presented last month by the DCA who partnered with the University of Sydney Business School, Google, Aurecon, Commonwealth Bank and Deloitte.

Dr Groutsis told Neos Kosmos that the conversations it has sparked could lead to positive outcomes for culturally diverse women aiming to break the glass ceiling.

“There are both visible and invisible barriers that block women from accessing these leadership positions,” she says. “It’s optimistic in having the conversation we are shaking the cage and saying that this needs to change.”

The business case is strong
The report showed that having greater numbers of culturally diverse women in leadership positions is backed up by a strong business case. Companies in the top quartile of racial/ethnic diversity in leadership teams are 35 per cent more likely to have financial returns above their national industry median.
“What was really striking was two out of the three women that we spoke with, and we spoke with over 230 women, indicated they are multilingual,” she says.

“This is a really incredible skill. In all the research, this is highlighted as a clear marker of creativity and product and process innovation. The other thing is that a lot of these women also said that they felt like chameleons. So, they could step in different cultural and market contexts and almost slide into them without making any changes to how they interact.
“But only about 10 per cent of them said that their leadership skills were fully utilised and that when they are utilised, they can operate seamlessly in different market arenas.
“So as an example, going overseas and operating just as seamlessly in a Greek environment as I do in an Australian environment – that is a competency.”

“The Australian multicultural market has an estimated purchasing power of over $75 billion per year and the global buying power of women is estimated to reach $40 trillion in 2018,” she says.

“So, when our respondents indicated that only 15 per cent strongly agreed that their cultural competencies were being fully utilised to access new markets, there’s an 85 per cent lag in what organisations could be harnessing.
“This makes the compelling evidence about why we need more culturally diverse women in decision-making positions and more culturally diverse women to give a more nuanced understanding of the markets that we can enter.”

Mentoring works
One of the ways that culturally diverse women can access a leadership role is by establishing contacts through professional networks but Groutsis revealed that not every workplace is set up for such a process.

“Mentoring is really important,” she says. “It’s a very subtle, but a very powerful thing. When it happens informally and organically it’s the best because it’s not forced upon you.
“Having someone that a) has your back and b) advises you of opportunities is important. When they do advise of opportunities it makes you feel worthy and valued and that you’re recognised. Having that in place has been unbelievably self-affirming. That’s what we all need whether you’re male or female or culturally diverse or from an Anglo-Celtic background.”

The discrimination burden
“The other thing that struck me is when women in leadership positions found themselves in these positions they tended to feel that they had the ‘burden’ as the spokesperson for culturally diverse women. It increased their workload as they were earmarked as the change agent for the subsequent culturally diverse women. Paradoxically it was also intimated by some people that they were placed there as a result of targets. So, they sort of copped it from both sides. You’ve got this extra workload because you’re going to bring up the next generation of culturally diverse women, but at the same time you also got there from an unfair advantage.”

Monitor for success
Another major finding emphasised was the need for a new partnership model that includes finding a better way to monitor and measure women working in senior positions.

“We need leaders to be part of it; we need people who identify and Anglo-Celtic, men, women, we need everyone to be a part of this change model.
“We also need to start monitoring a lot better. Sometimes it’s scary to monitor because we don’t like what we see. So, unless we have a way of reporting and assessing the diversity management initiatives we have in place, as well as the systems and structures we’ll never have solid evidence. And that’s when things start to change – when you have evidence.
“But we need to go beyond the numbers and we need the stories of the women and we need their advice because they know what their experience is.”

“The report showed that 30 per cent of respondents said that they were planning on moving on in the next year and these were aspiring leaders, emerging leaders and senior leaders,” she says.

“So, imagine the organisational knowledge these organisations are going to lose to a potential competitor. If I was going to develop a compelling argument for organisations it’s that there is a really strong business case for organisations to start having this conversation and doing more about facilitating the development of culturally diverse women. It’s a competency that is only a benefit, it’s not a potential loss in any way.”

View the recommendations and full report at dca.org.au/research/project/cracking-glass-cultural-ceiling