Daniel Andrews: ‘Britain must return the Parthenon Marbles to Greece’ 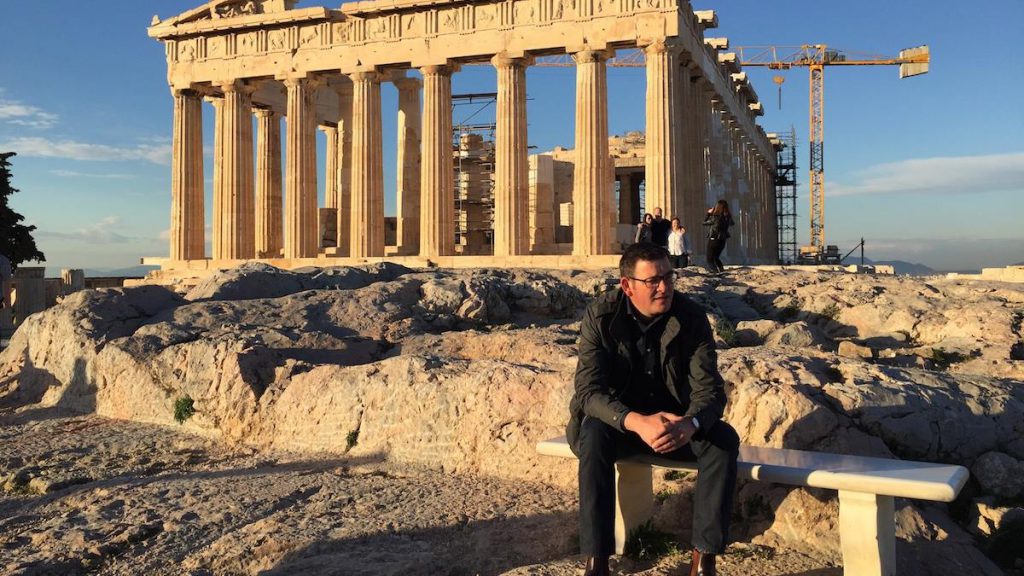 “This unique partnership between our own Hellenic Museum and the internationally renowned Benaki Museum will combine the ancient with the contemporary through the exchange of collections, ideas and expertise,” the Premier said on Wednesday.

Meanwhile, Mr Andrews laid a wreath at the Athens War Memorial to commemorate the fallen Australian soldiers buried at the Phaleron War Cemetery, and all soldiers who lost their lives during the World Wars.

He also announced that to mark the 100 year anniversary of the end of World War One – a one off special delegation of Premier’s Spirit of Anzac Prize alumni will travel to Greece, the Western Front and London in 2018. The tour encourages young Victorians to study Australia’s wartime history by sending secondary students on a study tour of sites where Australians have served in war.

In 2018, 10 participants from the first 10 years of the Premier’s Spirit of Anzac Program travel to Greece to witness the signing of the Armistice of Mudros to recognise the 100 year anniversary since hostilities ceased in the region on October 30, 1918.

The Government will provide $150,000 towards the tour for the party to visit significant sites on the Western Front and London where they will attend commemorative events on 11 November 2018 to celebrate the end of World War One and a book to tell the story of Victorians who served their country in Lemnos during wartime will be commissioned.

Another $5,000 will be allocated to Mudros High School in Lemnos to further strengthen the ties between Victorian and Lemnos school students developed over previous Premier’s Spirit of Anzac Prize Tours.

A further contribution of $2,000 is being made to the Lemnos Gallipoli Commemorative Committee – a Victorian organisation raising awareness of Lemnos’s role in the Gallipoli campaign – to support their work in formally recognising the significance of Australia Pier in Lemnos.

“The special delegation to mark 100 years since the Mudros Armistice and the end of the war in November 1918 is a wonderful opportunity for our best and brightest Spirit of Anzac Prize alumni to return to Greece and reflect on the Australians who gave their lives at war.”

“It’s so important for our kids to learn about this time in our history and the sacrifices our veterans made – by supporting schools and organisations connected to Lemnos we’re ensuring they can,” he continued.

The following day Mr Andrews climbed the Acropolis and took a candid photo on the holy rock which he posted on social media with this caption: “Britain must return the Parthenon Marbles to Greece. These monuments to culture, democracy and society must be made whole again. This is not just my opinion. This is the position of the Victorian Government. And given our state’s unique relationship with both Britain and Greece, I believe we have a powerful role to play in righting this injustice.”

Wrapping up his Athenian trip the Premier caught up with both President Pavlopoulos and Prime Minister Tsipras, describing the meetings as “very warm”.

“Our discussions focussed on strengthening our economic and trade ties and our cultural links,” he explained.

“The relationship between Victoria and Greece can only get stronger and I know there are great things to come in the future”.

On Friday, the Premier announced a new Memorandum of Understanding (MoU) between the Greek and the Victorian Governments that will bolster the delivery of Greek language programs in schools and kinders. The foundations for the agreement were set during Minister Jenny Mikakos’ visit to Athens in July where she met with Minister Zouraris.

“We have only a small number of kindergarten programs that currently offer Greek language programs which I have visited and been impressed with. (…) If we are to retain a strong connection to our language and culture it is important that children make that connection as early as possible.”