A family-friendly, personal transport and errand company providing that extra support time-poor and lonely people need and may not have Personal struggles led to Sydney entrepreneur Maria Xynias developing Ladies Running Errands (LRE) in 2009. Recovering from illness and some personal difficulties she realised how lucky she was to have a supportive family network when her predicament became overwhelming, something that many people she came across during that time did not have.

Her family would often run errands on her behalf while transporting her to hospital and doctor’s appointments. That was when she came up with her successful business idea, launched in 2011 with only $500 and 3,000 homemade flyers.

Her only means of transport at the time was a 1997 Ford Falcon, yet now she is looking at a profit that easily hits hundreds of thousands; it goes to show, LRE indeed covered a big hole in the Sydney market.

Maria created a smart and savvy transport and errand company from her home office in Balmain to provide people in need of help with a breather when it comes to daily activities like going to the shops, picking up something from the chemist, or attending a specialist appointment.

“Need a hand picking up the kids from school or taking family members to appointments? Have a day surgery coming up? Nothing is too difficult for the LRE team,” Maria Xynias says.

“So often we feel overwhelmed at all the things we have to do. If only there was an extra family member that could help out. That’s what makes this company so unique! That’s where we come into the picture with a lot more to offer.”

Maria saw her company significantly expand in 2017 with the addition of three franchises. Amongst the three people that have entered the business (Melisa Prieto for the Ryde region, and Ros Hunter for the upper North Shore), comes another proud woman of Greek descent, Effy Drosinos, who handles the wider Sydney St George area. Effy loves servicing her community.

“I was born in Australia but my parents never stopped speaking Greek to us at home so I am pretty much a native speaker,” she tells Neos Kosmos.

“They made what they thought was a sacrifice and did not learn English so we could keep speaking Greek. Now we are paying for it and between my bother, my sister and me, we all need to take a lot of time to support our parents. They need to be escorted to the doctors and to public services as they find it hard to understand the language and this is quite common in many Greek homes.”

The service, however, is not directed to the Greek community: “We’re helping people that need help regardless of background but it is a plus that I speak Greek fluently having lived in Athens for quite a while, as there is a significant first-generation Greek population here. It’s a service for the entire community,” she says adding that “one of the reasons I joined the business is to be able to give the mature-aged Greek community the helping hand they deserve and will so appreciate.”

Maria, who bought into the business four months ago, initially saw an ad for available franchises on Facebook and decided to give Maria a call as she found that her personal values completely align with what LRE stands for: regardless of the hour, regardless of the request, LRE will be there to offer support and to take care of those little (or big) things quickly, easily, and economically.

“I was in the medical field for years as a practice manager and I’ve always loved helping people. I’ve been doing the LRE thing for a month now and I’m so happy,” she enthuses.

“I’m trying to build the territory and trying to get my name out there, hoping to get to the point where Maria is and have more people, more drivers, and allocate the jobs to others.”

Even though Effy has been handling the St George area by herself, the way demand is increasing, she will soon need staff as she cannot physically be in two places at the same time.

“We provide 24 hour airport transfers including all child car restraints, doctor’s appointments and day surgery drop off and collection and runs to and from school and/or day care. We’re that extra family member everybody wants and often just don’t have,” she explains. 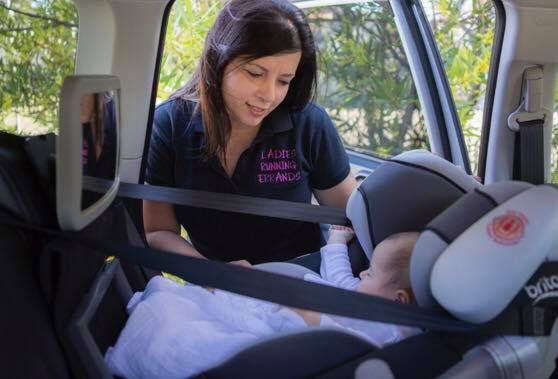 The team is mainly made up of female drivers as well as some great male drivers standing by to do jobs that require heavy lifting, like carrying a patient or a disabled person in and out of the car or their home or even take care of personal shopping needs.

“One of the very important services we provide is picking up newborns and parents from hospitals and their parents as we have the approved baby seats. We have realised that some people are living in the city and don’t have a car or relatives here and they need a safe transport back home. All-age baby and booster seats are always provided.
“On the fun side of things, being predominantly staffed by women we can also offer a ‘girls’ night out on the town’ delivery and ‘safe end of night pick up’ as we call it. Something like a personal ride from ladies to ladies who want to feel safe.”