It’s not easy to describe Kirkis and why this ‘name’ means so much to Melbourne’s music industry, even though his work has not been confined by Australian borders.

Kirkis is a one-man show delivering a six-piece, synth-fuelled ensemble; an ever-evolving project; an idea; an artistic identity born from Matthew Kirkis’ endless desire to create through many and varied means of expression. Kirkis is a multi-instrumentalist, one could say a self-taught musician, composer, songwriter and producer who directs his own videos and experiments with set design. He is also a painter and entertains quite the love affair with film photography. His tracks have received international interest and have been played by several radio producers, while he has also performed in some of the biggest festivals around the world. His unique sound and creative signature brought him to the attention of Grammy-nominated Haitus Kayote with whom he toured and wrote. Kirkis also played guitar in Kirin J Callinan’s band, and became part of Floating Points’s latest album ‘Mojave Desert’. Two months ago, having returned to Melbourne, Kirkis released ‘Vide’, his new album recorded in London.

It was around that time when I briefly met Kirkis – under completely different circumstances – and although there was more than a slight resemblance, it took me a while to connect that low-key person first impression to the overwhelming presence on stage; the man behind the ‘disturbing’ videos, the music.

I strongly remember entering his home to have a work-related meeting with his partner and being unable to concentrate on the conversation due to the aroma coming from the kitchen.

Since then, I have spent a significant amount of time listening to ‘Vide’ on different platforms, at different times of day, through different mood swings. I’ve shared tracks on social media and I’ve seen friends across Australia and Europe share them too, commenting on “this guy’s originality”, how “distorted and morose everything sounds” yet “how bleak, yet how romantic and beautiful this is”. As I said in the beginning, it is hard to describe Kirkis’ music: it is a cold-wave fusion of genres with a dash of punk, electronica, jazz, and poetry. I have read several articles about Kirkis’ music in mainstream media and on music platforms naming him amongst the ones to keep an eye on, and one of the most promising artists of the weird-wave generation.

It was only after deciding to attend Kirkis’ gig tonight with a group of friends that I properly made the connection and realised that Kirkis is actually that Greek guy cooking that delicious food. I can say with certainty that this guy is not your usual cup of tea, but he’s definitely one to keep an eye on. 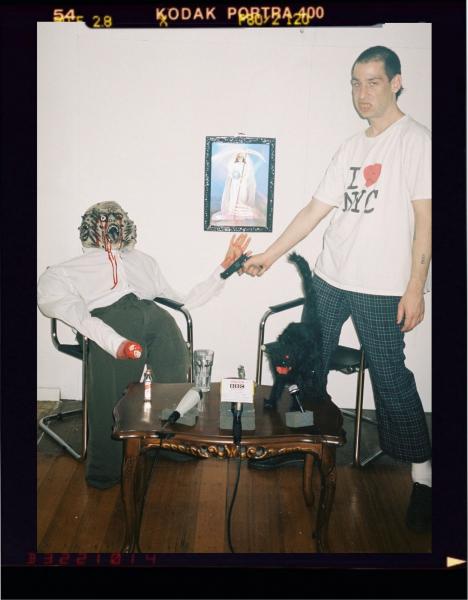 Many describe you as the Melbourne music scene’s ‘multitasking genius’?

I think that title is a little exaggerated. I am only an artist; like many that apply the vision to whichever medium is needed.

Do you do everything yourself when it comes to your work?

Yes but also know that to do something wild usually requires a team you can trust and collaborate with; the team I’ve built, I love.

How many things do you dabble in?

I studied painting at Sydney College of the Arts and the New York Art Students’ League, so at heart I love to paint. I also like film and sculpture. I did write a play at one point but there’s some things that you should just leave alone.

When did you realise this is what you want to do in life?

Did it come as a result of constant trial and error or did you find your way from an early age?

There were, of course, influences to directions that I guess only in hindsight you can see how they have moulded you. Isn’t life just one big trial and error message?

You have worked with Haitus Kayote, you have collaborated and toured with Floating Points, worked with Kirin J Callinan and more. You have performed in festivals in Australia and overseas like Primavera and Glastonbury. Who else would you like to collaborate with?

My dream collaboration would without a doubt be with Miloš Forman.

In October, your latest album ‘Vide’ came out and although it oozes that distinct sick, bleak and underground, loneliness-imbued feel, it has a positive effect. What does ‘Vide’ mean to you?

Vide is French for empty so there are shades of those colours but it’s so personal… I think I am more interested in what it means to you.

You recently performed at St Paul’s Cathedral. How did that feel?

It was surreal; a lot of reverb.

I don’t want to label it but I am aware it falls into certain categories.

Someone told me that there’s a little bit of Greek heritage in you? Are you connected with it at all?

Ha! Yes. My family is from Kalymnos. I attended a Greek school in Sydney, St Euphemia, for the first six years of my schooling. I’ d say im pretty connected!

You have opted to defy normalcy standards and, in a way, beautify the ugly and raw side of things through your work. Do you remember when you consciously embraced this attitude towards life?

I am aware that some things involving my work in comparison to a lot of other work from my peers is different, but it comes naturally. I haven’t embraced this attitude, I think it’s just a reflection of me and it is subject to change at any point.

What doesn’t inspire you at all?

If you are in Melbourne and you want to see Kirkis perform live, head to The Tote tonight for his official album launch.

When: Saturday 23 December from 8.00 pm until Sunday 24 December at 3.00 pm. Kirkis goes on stage at 12 midnight.
Where: The Tote – Band Room, 71 Johnston Street (Cnr Johnston and Wellington St), Collingwood, VIC.