‘When I heard people watching say ‘what? There’s a girl, look there’s a girl’ I became more determined’ 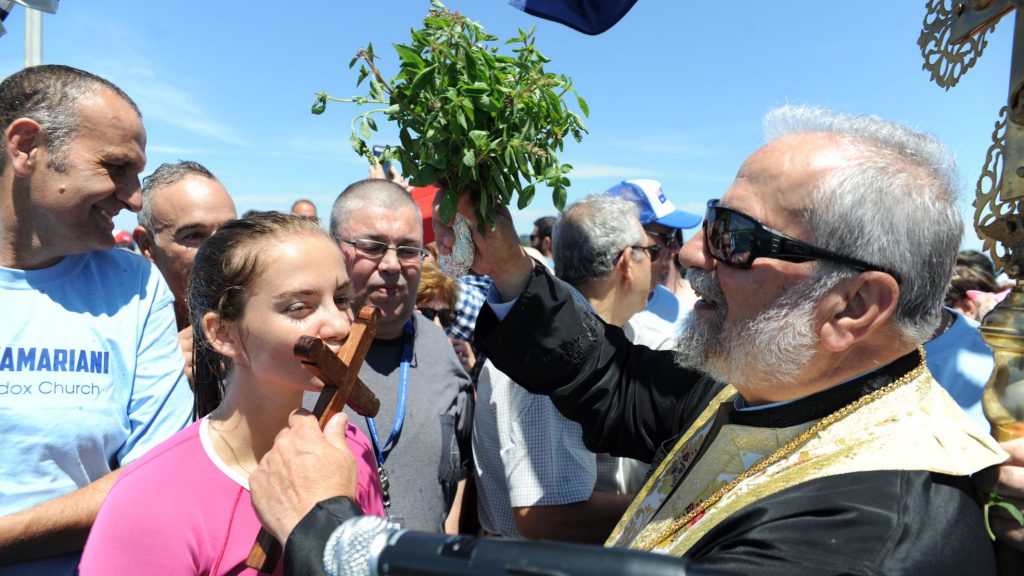 This year’s Holy Epiphany celebrations in Australia were reported on by media outlets worldwide, with the main focus being Emily Paxevanos, the 16-year-old Melbourne gal that dove for the cross at Rye beach, the only girl in a crowd of about 50 young men.

Father Eleftherios Tatsis of the Panagia Kamariani parish, threw the wooden cross far and deep into the waters; everyone jumped straight in, so did Emily, but this year with much more determination than 2015, when she first attempted the dive.

Emily swam for a good 30 metres before she saw and grabbed the cross, having followed the course of the wind and waves.

There were many cheers when she held it up in the air but among the congratulating voices, many voiced their displeasure. The comments went on for days, especially on social media, with several members of the Greek Orthodox community saying women should not be allowed to dive for the cross.

Father Tatsis was the first to set the record straight, stating that there is no doctrine prohibiting females from participating in the practice, with the Archdiocese confirming “there has never been a canon against women diving for the cross, as long as they are modestly dressed”.

Neos Kosmos contacted Emily Paxevanos, in order to find out more about her fierce and inspiring approach to life.

“I’ve grown up around the water so I have always been involved in water sports such as fishing, swimming, surfing, boating and jet skiing. The ocean is my second home,” she tells days after she got her boat and jet ski licence, explaining that she has never been afraid of water.

“I have watched this event every year since I can remember and always wondered why a girl never jumped in, so when I was 13 I gave it a shot and was lucky enough to win when I tried again this year.” Even though she was warned that there was a chance she could get herself hurt diving off and under the Rye pier it did not stop her, neither did lining up amongst a crowd of men.

“I was a little nervous at the beginning but when I heard people watching say ‘what? There’s a girl, look there’s a girl’ I became more determined,” she says.

Emily could hear several people object to her being there and about to dive for the cross, both fellow divers and spectators but did not let their voices put her off.

“The negative comments didn’t bother me in the slightest and instead, I’m more than happy to hear I inspired people,” she tells Neos Kosmos, admitting that there is some deep-rooted ignorance. She is however optimistic that perceptions will change.

“Comments wrongly assuming it’s prohibited for women to compete only made me more glad I won,” she says.

“Father Lefteris was extremely excited and accepting of me trying and agreed it was about time a girl gave it a go after all these years. We are all God’s children so there should be nothing standing in the way of a girl competing in this holy event. I was proud to prove that women are certainly capable of grabbing hold of the cross amongst all the men, and I encourage more to take part next year. It can be done.”

Emily believes that other girls who hesitate to attempt should not be afraid of failure or judgement.

“It’s a blessing of the sea so it’s an honour just to compete,” she enthuses, whilst hopeful that her successful effort has changed things now and inspired all those women who have wanted to compete in this event, to compete in 2019.

“I am hoping to participate again next year, possibly with more girls by my side!” she adds.

“If I can do it, so can they. Anything is possible.”