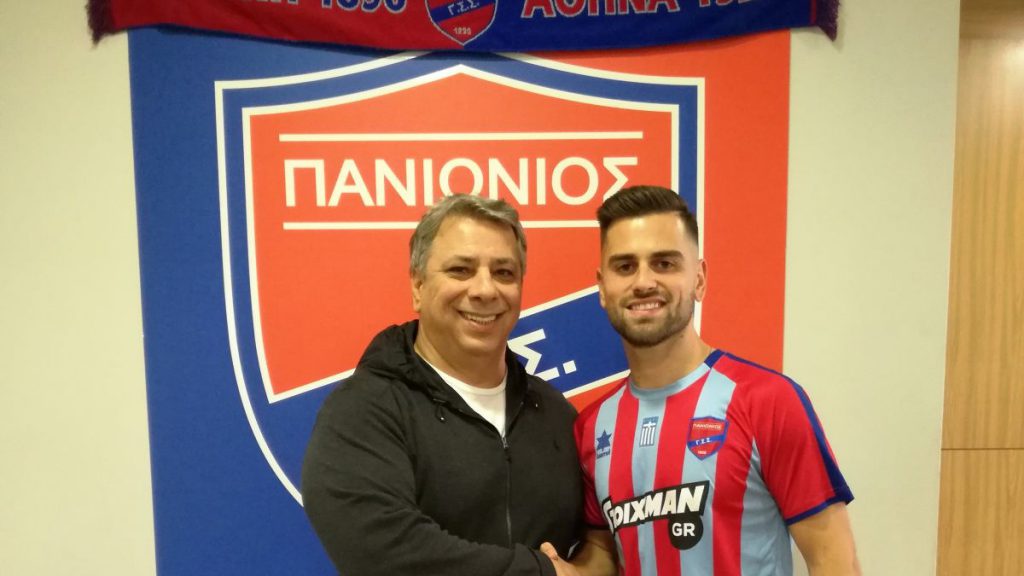 For the last two seasons Makrillos has been playing in the National Premier Leagues NSW (NPL) and before that he spent six years with English top-flight club Stoke City.

So, it’s a remarkable rise for Makrillos to go from being a part-time player in the NPL to making his full-time professional debut with a first-rate European club.

Speaking to Neos Kosmos the day after he made his debut for Panionios against Panetolikos, the Greek Australian was still buzzing.

“The feeling I have is that my dream has come true after 14 years of working so hard for something I’ve wanted my whole life.
“It’s only been a week since I signed for the club and I was a bit surprised the coach actually had the trust in me to put me on. I came on in the 73rd-minute and at the time we were down 1-0. When he did put me on, I felt like I changed the game and we got a goal back and the game finished 1-1.”

What’s even more impressive about Makrillos’ debut is that before he arrived in Greece, he had not played a game in almost four months. But the 22-year-old says his new club did a lot of physical work leading into the game to get him in peak physical condition.

“I’ve been doing a lot of extra work with the fitness coach to get my levels to where the other players are because in Australia the NPL was in the off season and I hadn’t played in a while,” he says.

“So, for me to not have a game under my belt after not being involved in a competitive match for three to four months and then be playing last night the coach must have been happy with my performance in training and he believed in me enough to put me on. I am glad I have done well.”

Makrillos’ grandparents migrated from Tripoli and Kalymnos to Australia in 1965 and he says playing for a club from his family’s homeland fills him with pride.

“I feel proud to be able to play football in a country where my grandparents were born,” he says.

“I feel a great sense of heritage and I’m honoured to be given the chance. Superleague Greece is well-known all around Europe. I’m very confident about what I can achieve here. When I arrived in Greece there were no promises made to me as to where I would be. I trialled very well, impressed the coaching staff, and the fact that they have signed me for three-and-a-half years is a sign that they have faith in my ability to be a part of Panionios’ first team.”

Makrillos grew up in the Sydney suburb of Belmore and played youth football for APIA, Blacktown City Demons, and Sutherland Sharks with whom the opportunity of a lifetime arose.

“When I was 13, I went overseas and played in the Night Cup with Sutherland Sharks, and Barcelona were in our group,” he says. “After they saw me play they offered me an opportunity to train with the club for three months.
“I got to train with players like Hector Bellerin before he made the move to Arsenal. It was a big experience for me and that is something I will never forget.”

After Barcelona, Makrillos was offered a spot at Stoke City’s youth academy where he stayed for six years and he says the experience with the English Premier League club was vital in preparing him for Greece.

“The professional environment at Stoke has helped me cope with the expectations of professional football,” he says.

“It is a category one club which is the same level such as the youth teams of Manchester United, Arsenal, Chelsea, Liverpool, and Manchester City. So, you can just imagine what the coaching stuff and all the facilities were like there.
“We were educated day in and day out on how we needed to conduct ourselves, on our attitudes, and our professionalism, and it became ingrained in me.”

As he started to move up through the youth ranks at Stoke, Makrillos says he was able to spend a considerable amount of time with the senior squad.

“I played at U21 level which at the time was the reserve team,” he says.

“I trained four to five days a week with the first team and I was regularly in that environment. The experience was amazing especially being able to train and play with some world-class players. Being with the first team quite often was my biggest reward.”

He says his favourite memory of the time was playing in the Youth FA Cup quarterfinals.

“It was such a big experience for us as young players. A lot of the legends in football in England such as David Beckham, Paul Scholes, and Frank Lampard have won this cup and it was amazing to have the chance to play in the tournament.”

Makrillos says the decision to head back to Australia after such a long time away was due to being homesick.

“I came back home to be with the family,” he says.

“Our family were broken apart. I was living with my parents in England, but my brothers and sisters were back in Australia and I just didn’t want us to be apart. We missed home, so we decided to come back and be together again.”

Many observers would see Makrillos’ decision to leave the EPL and return home just as his career at Stoke was progressing as a risky strategy. And it didn’t come without its struggles. Even though Makrillos had top-flight experience, opportunities in the A-league were limited and he spent the next two years playing in the NPL.

But Makrillos says he never doubted his skill as a footballer and knew that another chance to play overseas would arrive sooner or later.

“I just had to be really patient knowing that my abilities were higher than the Australian level even though I did have to drop to a lower league,” he says.

“But I had the right people behind me at the time and everything has turned out great for me. Panionios was watching me while I was in Australia and they were interested in me before I came back home but the time wasn’t right for me. But the club still kept tabs on me and when another opportunity came up and the timing worked I accepted the offer straight away.”

Looking ahead, Makrillos wants to build on the first professional game of his career and if he keeps playing regularly feels he could even be a bolter for the Socceroos World Cup squad.

“For me it’s not really about rushing,” he says.

“I just want to continue helping the team and performing really well in training and in the games whenever I am able to come on. Just to continue going well and taking it easy.
“I have represented the young Socceroos at under 20 level which was such a big experience in my career. It is a big chance for me now, say if the Socceroos do come and with the World Cup happening soon, the more I play the better chance it is for me.”