US ambassador worries about potential Aegean ‘accident’ between Turkey and Greece 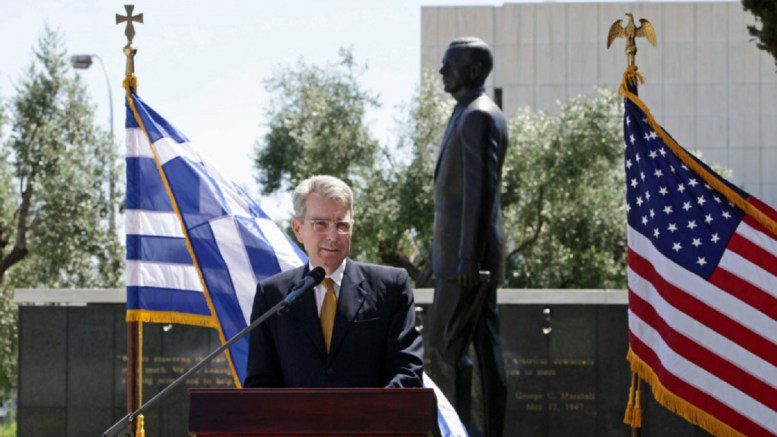 The possibility of an ‘accident’ happening between Greece and Turkey in the Aegean is a matter of concern for the US Ambassador to Athens, Geoffrey Pyatt. In a television interview broadcast last Tuesday, the head of the American diplomatic mission in Greece expressed his worries, regarding the recent activity in the eastern Aegean, where Greek and Turkish vessels are often facing off.

One such incident took place last Sunday, when the Greek Minister of Defence, Panos Kammenos threw a wreath into the waters, in memory of the three servicemen who died in the Imia crisis of 1996. The symbolic gesture took place under the constant surveillance of Turkish vessels, which all but prevented the Greek vessel from approaching the islets.

A couple of weeks ago, a collision between a Turkish coast guard boat and a Greek army vessel was prevented at the last minute, at the same location.
Meanwhile, the Turkish Air Force has intensified violations of the Greek air space above the Aegean. Last week alone, 40 such violations were recorded on Monday and 34 on Tuesday. In the latter incident, two F-16 fighter jets and two CN-235 Turkish Air force reconnaissance aeroplanes flew in formation over Greek airspace, with the two CN-235 proceeding to commit three infringements of the Athens FIR. In all these situations, the Turkish planes were successfully intercepted by the Greek air force.