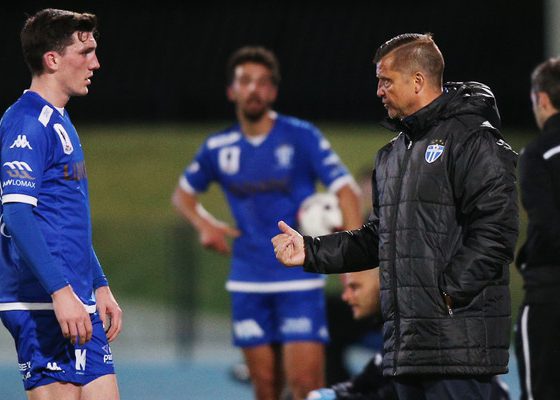 On the eve of a new NPL season, South Melbourne FC dropped a bombshell by announcing the departure of long serving senior coach Chris Taylor with a year still to run on his contract.

Taylor’s four-and-a-half year tenure at the club (long by NPL standards) bore fruit in terms of on-field success with South capturing two Premiership Plates, an NPL Championship and a Dockerty Cup trophy along the way, making Taylor the most successful and longest serving coach at the club since Ange Postecoglou in the NSL era.

Taylor’s sudden departure well into another pre-season program and just four weeks away from the opening round of the season, has taken many by complete surprise including it seems the coach himself.

Speaking to Neos Kosmos earlier in the week, just two days after receiving news of his contract termination, Taylor said he was still unsure as to why his services were terminated and was awaiting clarification.

“To be honest with you, I’m still a little unsure myself. I had a phone call to tell me that my contract was being terminated immediately. I received an email, which will probably be a letter which comes through in the next day or so, outlining the reasons: ‘a breach of certain clauses’. But there is no real spelling out of what the breaches were. So it’s a little bit unsure on my behalf. Obviously the board made those decisions. I’m very disappointed with what’s happened. I can’t comment any further. It’s really in the hands of the club,” he said.

Until the club was able to further elaborate on what the “breach of certain clauses” meant, Taylor said he was at a loss to know why his services were terminated.

“It’s a performance based contract and all the KPIs (Key Performance Indicators) that they put in place are well and truly achieved, so it seems a little bit strange to me. Obviously someone has a better idea of why they’re doing this,” Taylor said.

He said he had no inkling of what was about to happen before he received the call from the club last Saturday morning.

“We played the night before at Springvale White Eagles. Everything was right. The club were very keen to get everyone signed up that night to finalise the squad. They did that and then I got the phone call the next morning. I think people will make their own assumption about the series of events and what it has led to, and form their own opinion on it,” he said.

Whilst Taylor himself was unable to shed light onto the reasons behind his dismissal, the club itself was unwilling to comment publicly as to the reasons when contacted by Neos Kosmos.

SMFC President Leo Athanasakis did confirm that the termination of Taylor’s contract was a unanimous board decision, but that the club didn’t want to publicly comment on the “what, how and why” of the decision, adding “that’s an issue for the club and Chris”.

When questioned about the timing of the termination such a long way into the pre-season, and the effects this could have on the team, Athanasakis said, “Obviously it’s never a good thing to change coach. Chris Taylor has been with us for four-and-a-half years. That’s an eternity in the NPL. Like I said, the decision that was made was not taken lightly. And weighing all the factors, as well as the issues we had with Chris, what other impacts it would have on other facets of the club, it was deemed to be the most appropriate time to do it, to give us an opportunity to reset for 2018.”

Taylor himself looks back over his tenure at the club with pride and enjoyment but tinged with disappointment at the manner in which it has ended.

“I’ve had some good times at SMFC, I’ve got obviously no issues with the club and the supporters. I still hold my memories. I’ve had some great memories and great times there. For that I’m grateful to everyone. But everyone moves on. We’ll see what the future holds for everyone,” he sad.

“But it’s hard leaving South Melbourne. I feel let down in the fact that this season’s just two to three weeks away. I’ve assembled a squad and basically had the rug pulled from under me. I feel disappointed with that, and I feel a lot of people do. But it is what it is. I’ve got a family to think of. They come first.”

Taylor was reluctant to answer questions regarding his relationship with the board, and whether he experienced interference.

“Look there are things, and there are certain ways I feel. I mean I’d rather keep them to myself at the moment,” but was sure that “in time that will all come out”.

“I’ve got certain feelings and thoughts about what’s happened. You know, there’s obviously been a move afoot to remove me, so I’m not really obliged to comment on that. It’s obviously going to become a legal case and it will get dealt with in the courts I’d say,” Taylor added.

Meanwhile South Melbourne has wasted little time in naming Taylor’s replacement; on Tuesday they announced the appointment of U 20s coach Sasa Kolman.

Prior to the public announcement, Athanasakis had acknowledged to Neos Kosmos that “it’s difficult to replace a coach of Chris Taylor’s calibre, but SMFC does have high expectations of its coaches.”

He also went on to provide what some believe could be a rationale for the change of senior coach at South Melbourne.

“We also want to focus a lot more on the champions that we’re developing in the club through our youth system,” he said.

“We believe our youth system is bearing a lot of fruit and we want to ensure that the coach buys into that youth investment and can implement that through the senior team without impacting any of the performance, and achieving the championships. So that’s a skill set we’re looking for. We can build from the youth, as well as obtain good experienced players.”