An old, yet interesting, story leading up to the protest rally for Macedonia on Sunday 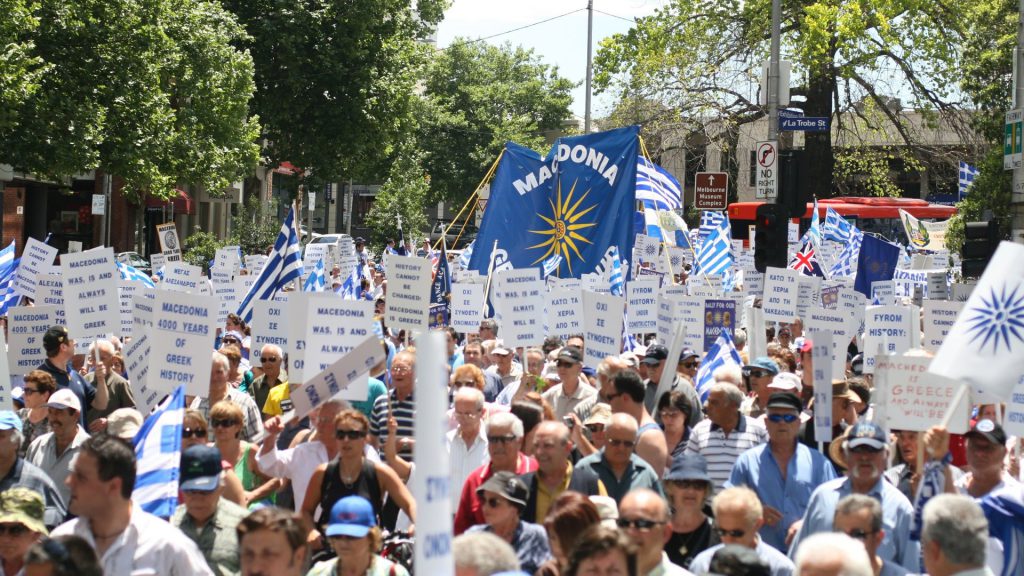 Melbourne’s rally for Macedonia which will take place on Sunday, and the ease with which some individuals share their nationalism via Facebook and other social media outlets, prompted me to take a trip down memory lane.

I went back 24 years, when a huge rally for Macedonia took place in Melbourne for the very first time. Back then there was no internet, or Facebook, not even 3XY.

The entire national campaign depended exclusively on Neos Kosmos. The same with anything else of significance in our community.

Of course, it was marked by absolute success. It was the largest rally ever to be held in our community and it is unlikely it will be surpassed ever.

Nevertheless, even back then, there were individuals handing out ‘nationalism’ identities. To those who did not agree with their views.

For example, at the rally held in Adelaide, there were those who spat on, and condemned the then Minister of Immigration and Ethnic Affairs, Nick Bolkus.

They got to the point where they didn’t even allow him the opportunity to speak in spite of the fact he was an invited dignitary.

Ironically, what most people don’t know is the fact that Australia continues to recognise Greece’s neighbouring country by the name FYROM can be attributed to a large extent to Bolkus.

It was late on a Monday afternoon, in the early 1990s when Nick Bolkus, the Minister of Immigration at the time, arrived flustered and out of breath at the Neos Kosmos central office.

“I need an indisputable reason to convince Prime Minister Paul Keating to instruct the Minister of Foreign Affairs, Gareth Evans, to delay Australia’s recognition of Skopje as Macedonia,” he told me and Neos Kosmos publisher Dimitris Gogos.

Evans had been in New York at the General Assembly of the United Nations and the Australian Government had decided to accept the recognition of the neighbouring state as Macedonia.

Bolkus, fully aware that this would provoke a strong reaction – and a justifiable one – from the Greek community, attempted to reverse it.
He asked for assistance from the Greek Ministry of Foreign Affairs and local diplomatic authorities in vain.

When all else failed, he turned to his very close friend Dimitris Gogos and myself.

We struggled immensely to come up with a solution.

Given the United States had yet to recognise FYROM as Macedonia, we suggested to Bolkus that Australia should implement delay tactics in order for us to gain valuable time and come up with a better alternative.

He thought it was a brilliant idea and immediately called Prime Minister Paul Keating from Gogos’ office.

“Paul,” he said, “I’m here with Dimitris Gogos and he tells me that it will be disastrous if we presently recognise this country as Macedonia. Let’s wait for the United States as we always do as part of our foreign policy,” Bolkus added laughing.
Keating accepted the suggestion and immediately called Gareth Evans and instructed him accordingly.

The rest is history. All the leading characters in this story are still alive and can confirm the sequence of events mentioned above.
I would like to add that Bolkus, as the Minister of Immigration, had to maintain a balanced approach to everything he did.
And yet, it was this man that the so-called ‘patriots’ rushed to condemn vehemently and chased down at every opportunity for many years.
Their motives weren’t always pure and patriotic. They contributed to the politicking of the Liberal Party.

I wish to add that a few years later, Nick Bolkus instigated composer Mikis Theodorakis’ invitation Down Under, whom he honoured for his work on behalf of the Australian Government. Theodorakis was the main speaker at the recent rally for Macedonia in Athens.

I write these words, and yet I could write entire books, to highlight the fact that patriots aren’t those individuals who shout at and threaten (as they recently did via Facebook) those who may have a differing viewpoint from them.

At the same time, I assume that at Sunday’s rally, the protestors will be invited to sing our national anthem. It would be advisable that they remind themselves of our national poet’s saying: “Patriotic is what’s also real/truthful”.

Which, brings us to Neos Kosmos’ position regarding the issue.

Our newspaper believes that our readers are both mature and responsible and they also demand that they are well informed by us.

Within this context we report on the events, we provide commentary but also allow our journalists and editors to document and express their own opinions on the issues at hand.

A right which you also have as readers.

Our ‘Letters to the Editor’ section hosts all opinions, as does our electronic/web edition and our Facebook page.

In respect to Sunday’s rally, from the moment our fellow Greeks felt the need to organise a protest to express their position on the ‘Macedonia’ name dispute developments, our newspaper has an obligation to support their effort.

It would be inconsistent with our above-mentioned position on the free expression of viewpoints to not support this right, a right that many members of the community consider an obligation.

However, we should all be mindful of a certain group of extremists who – just like in the 1990s – seizing upon the sensitivities of many expatriates, are forcing our community into a dead-end street by promoting homeland exploitation and nationalism.