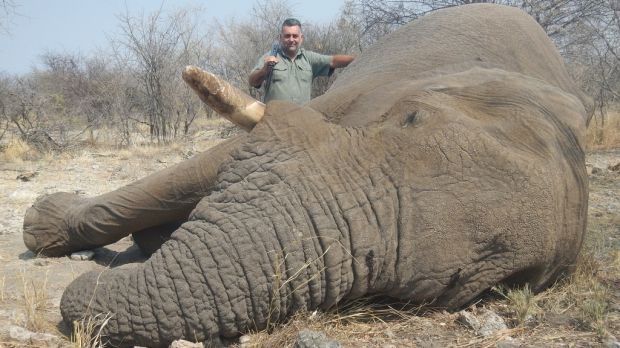 Animal activist groups are currently taking it out on Canberra businessman Nick Haridemos who up until yesterday was also the vice president of the Canberra Hellenic Club. The Greek Australian appears to have been posing with the dead bodies of the animals he hunted during several safari trips to Africa.

Animal rights groups responded to the photo of Mr Haridemos posing next to a slain baboon that is wearing sunglasses and a hat. One can still see the fresh blood on the baboon’s fur. That first photo taken in Zimbabwe, led to a public Photobucket account belonging to a nickha1 with far more images of the Greek Australian posing next to his kills. Most photos seem to have been taken 2010 and late 2016 and this month, when the businessman made trips to Africa. Amogst his kills one can see hyenas, dead elephants, a baboon and more.

Commenting on the kills, the user had written: “Absolutely funny as hell! The new driver gig was a blast….We did a video clip with Blake wired into the microphone talking and we actually drove off!”

On the same account  there are also photos of Haridemos in Namibia posing with ivory and over the body of a dead elephant.

“It is truly the place to hunt the biggest ivory in Africa, especially with Botswana now closed”.

The businessman has responded through his lawyer; he admits taking part in trophy hunting trips, however, he stressed it was all legal. After Fairfax Media put questions to Mr Haridemos, the images of him posing with slain animals were removed from the Photobucket account in question.

“Mr Haridemos has, on occasions, engaged in the activity of ‘conservation’ hunting. This is a regulated activity, which is undertaken in accordance with licences and quotas issued by the relevant country, and is conducted in a manner that does not pose a threat to any endangered species,” his lawyer said in a statement.

Canberra Times journalist Sherryn Groch who originally broke the story told Neos Kosmos that after investigating into Mr Haridemos’ travels, it appears that the 2016 hunt was run through Nyae Nyae Conservancy, which has a history of running legal hunts in the country since 1998. 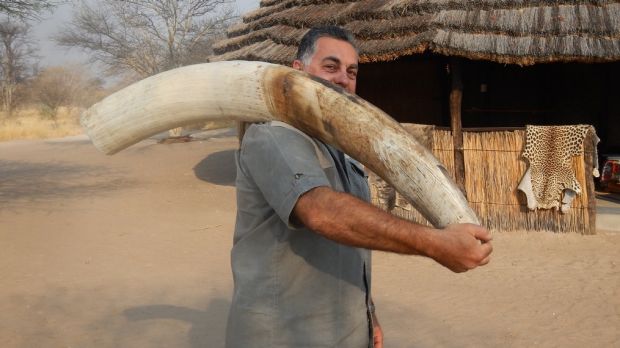 Meanwhile, the forum timeline reveals more photos captioned with detailed reports of several other hunts, always signed off by “Nick” who would fly business class into Namibia to hunt multiple elephants, and post his kills while making fun of them.

There are photos of him putting a bull elephant that had already been shot by poachers “out of its misery” and shooting “a big old baboon as we had stopped to change a flat tyre”. “He was a cocky old guy, thinking he was out of range at 171m, but he stopped to look back and the new Blaser R8 416 quickly ‘made my day’,” the post said.

Spokespeople from PETA Australia and Animal Liberation ACT described the images as appalling, condemning individuals that choose to engage in such activities for amusement.

Update: Haridemos has stepped down from his position as vice president of the Hellenic Club in Canberra following the public outrage caused by the photos.

Neos Kosmos contacted Andrew Satsias the President of the Hellenic Club of Canberra who distanced the Club’s position from Mr Haridemos’ activities.

“The Hellenic Club distances itself from the photos and the activities that they portray. The Hellenic Club supports and will continue to support wildlife groups and conservation charitable organisations including the RSPCA.

“As a large community club we recognise our role as a significant contributor to the social fabric and values of our city, and we stand by our obligation to reflect the best for our community and members,” he added stressing that the Club distances itself from the photos and the activities that they portray.