The filmmaker giving Greek youth a voice amid the crisis narrative

In the build-up to the release of Freedom Besieged’s official trailer, Panayiotis Yannitsos speaks to Neos Kosmos about how the process made him alter his perspective of humanity as a whole, and his commitment to the Greek people 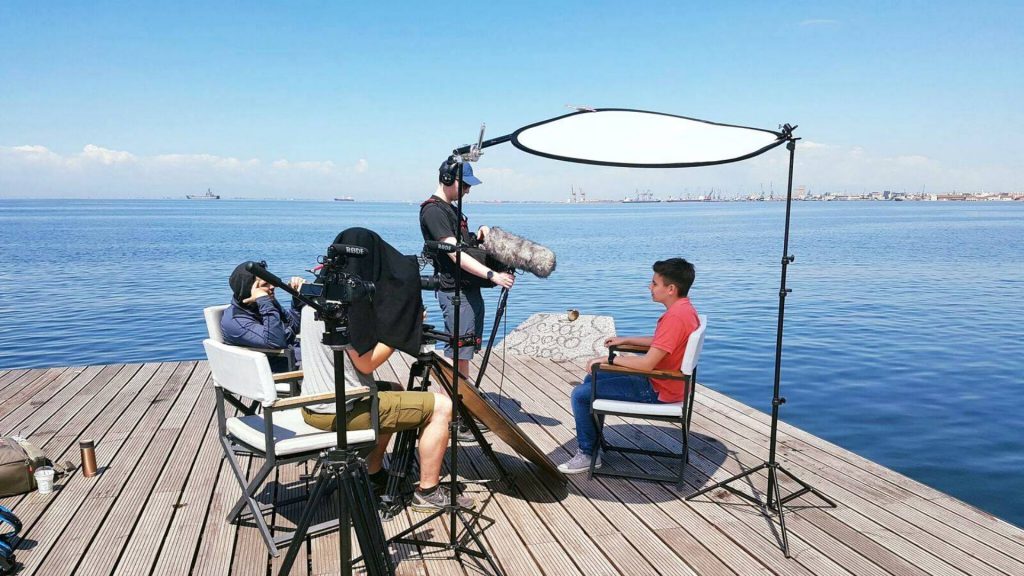 A behind the scenes shot from Freedom Besieged. Photos: Supplied

Since Greece’s economic crisis started, a number of documentaries have been released about the state of affairs, but none like Freedom Besieged.

I went into this project with a neat little package of things I believed I knew. But the world unravels that comfort zone in a hurry, and that is both terrifying and beautiful as a filmmaker.

The feature-length doco by award-winning Greek-Canadian filmmaker Panayiotis Yannitsos delves into the economic and political climate of Greece, but with a particular focus on the impact on the country’s youth.

He successfully delves into the effects on their development and psychology by seeking out the voices of everyday people – a 29-year-old Uber driver living in the Greek capital, a 22-year-old photographer in the anarchist neighbourhood of Exarcheia, and a 30-year-old entrepreneur building an eco village in the mountains of Euboea.

Meanwhile to create a bridge between Greece’s youth and the rest of the world, the young filmmaker and his crew also managed to pull together a number of A-listers to impart their knowledge, experience and opinions to the dialogue from a variety of sectors, including intellectual Noam Chomsky, former US presidential nominee Michael Dukakis, New Democracy leader Kyriakos Mitsotakis, the Euroopean Commission’s chief spokeperson Margaritis Schinas, professor and stateswoman Eleni Portaliou, Olympic champion Pyrros Dimas, and football legend Giorgos Karagounis, amongst others.

On Thursday 1 March the official trailer will be launched; a milestone moment for Yannitsos.

“I am glad to be showing audiences some of what we have been doing over the past few years,” he told Neos Kosmos.

“I believe in the story we are telling. I look forward to the conversations this will start over the coming months, not only within Greece and Europe, but also in several other countries across the globe. I most look forward to the debates. And of course this only heightens my excitement to show the world the film in its entirety. It has a lot to say. Three minutes is one thing; 70 is another.”

Since he started researching and filming Freedom Besieged in 2016, he says he sees Greece trending upwards, citing the recent announcement that Elon Musk will be establishing a Tesla hub in Athens, and the culinary renaissance emerging on Tinos. He sees these as victories for the Greek economy and the newly emerging Greek identity, and says that it is time to believe in a Greece ‘post-crisis’.

“I have researched in the trenches with common citizens and my optimism [as reflected in the film] has been there for years,” he says.

“There is a sense in my mind that although we are still trudging through the mud, there can be found a light at the end of the tunnel. We have begun this conversation in bite-sizes about what is to happen after we have emerged from this crisis. Greece is still in crisis in many ways, there can be no doubt, but to be conversing about a future that can reboot itself and focus on sustainable prosperity is very positive and has evolved significantly.”

Adding to this sense of optimism in the documentary is the youth basketball camp featured. Taking place annually in Yannitsos’ mother’s village, it is attended by 300 youngsters and led by a local farmer, John Karkalatos who is on a mission to inspire Greece’s youth to believe in themselves, and their country.

The process of filming has also been a personal evolution of sorts for Yannitsos, whose own views of Greece, its people, and the crisis have changed. He goes as far as to say that his perspective on humanity as a whole and the ways we perceive truth were put into question, which he did not expect.

“Many people out there are only given one half of the experience this crew and I had. I think to myself ‘What if I hadn’t put my boots on the ground? What if I [had] avoided certain neighbourhoods? What if I didn’t dig? What if I remained reliant on hearsay and news articles being fed to me from afar?’ It frightened me how confident we are in this age of information to have things brought to us; to not search ourselves. To not speak to those outside of our neighbourhood, even to those who frighten us,” he says.

“Some preconceived notions of mine were confirmed but many were shattered because this crew and I pushed beyond the fence. The greatest lesson: I went into this project with a neat little package of things I believed I knew. But the world unravels that comfort zone in a hurry, and that is both terrifying and beautiful as a filmmaker.”

Aside from being financed by Yannitsos’ company Inside Earth Productions, the filmmaker has been overwhelmed by the hundreds of private donations made by people from around the world to help bring the production to the big screen.

“To me, it is a testament to the film, which discusses communication and community building; to have it financed by not one major corporation, network, or distributor, but instead by the masses. I really love that,” he says.

The film is set to premiere in Greece ahead of the summer, and will have a festival run and limited theatrical release. Meanwhile Yannitsos is keeping his cards close to his chest for the time being regarding the film’s permanent home. In the meantime the crew are still working to raise the last of the funds needed to complete the documentary in its entirety by April.

There’s no mistaking Yannitsos’ intentions; in just over three minutes, the filmmaker manages to capture his mission, and the emotional weight that it carries for some of the Greek diaspora, a sentiment with which thousands of people around the world can relate.

If there’s one lesson he hopes viewers take away from Freedom Besieged it is to recognise that the Greek youth are not caricatures of the crisis, but key players, whose humanity must not be forgotten.

“Their complexity must be given the attention it deserves on a case-by-case basis or else we are ignoring the truth and caging human beings into a narrative we find convenient. So we need more community leaders to recognise the impact they can have in small places with a focused group. We must emerge from this crisis, but by doing so with [a] fine toothed comb,” he explains.

“It’s important to note that this film is only the beginning. I’ve made a promise to the Greek people that I am committed to generating tangible change within the country.”