The Pervolarides initiative in Thessaloniki aims to activate community, cater for those in need and give unemployed residents a new sense of purpose Filippos Polatsidis (right) reaps the fruit of the Pervolarides' crops.

When the crisis looming over Greece showed the first signs of what was about to ensue, there were many who remained hopeful that, at least, this would allow for Greeks to show solidarity and replace the failing economy with new cooperatives, large-scale charity projects, and actions of effective altruism. Almost eight years later, this has not proven to be true; society seems to be divided, philanthropy remains an activity designed to make those well-off feel better for themselves instead of creating tangible change, and those in need remain sidelined and deprived of opportunity.

Activist Filippos Polatsidis begs to differ: “there are cosmogonic shifts happening in society and social economy,” he says, dismissing negativity. He should know. For the past couple of years, he’s been part of several attempts to activate the community and support those in need – the unemployed, the poor, the migrants, and refugees. At the moment, he’s involved in a project of community-supported agriculture, but more importantly, he’s part of one of Thessaloniki’s most determined teams, the ‘Pervolarides’ (backyard farmers).

“Our story begins four years ago, when a group of unemployed people had the idea to harvest olives from the abandoned olive trees that are scattered around the eastern part of the city and the surrounding villages,” he adds.

The group gathered the crop, sent the olives to the press and produced oil that they shared among themselves. This has become an annual activity, producing a variable amount of olive oil, depending on weather conditions. At the same time, the group was granted permission to cultivate a small field outside Thessaloniki, to produce just enough vegetables to support those working on it. This became the basis for a series of projects of sustainable economy, which became the pole of attraction for many different people, working together in teams; a beekeeping project produces 300 kilograms of honey per year; a food-processing project has people making jam, sauces, pickled vegetables, and other products.

“Pervolarides is an umbrella group for a series of activities,” says Filippos Polatsidis. 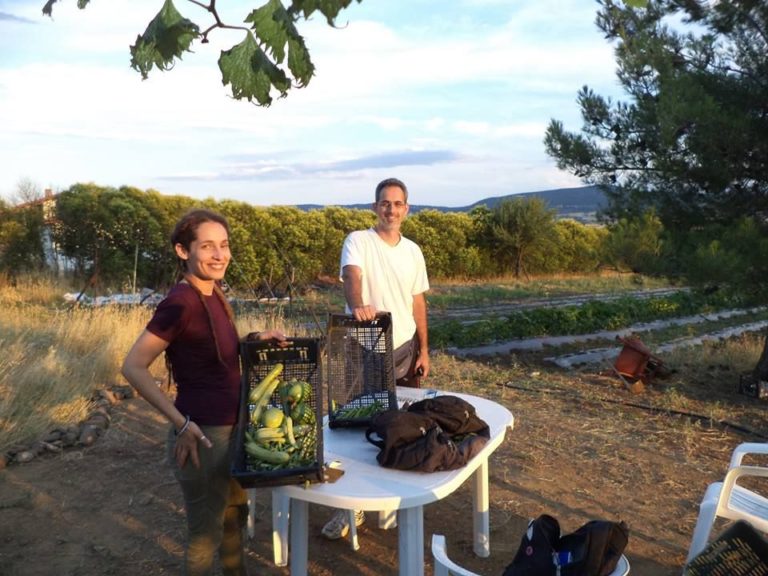 “We have a group of about 10 people, who may not know each other beforehand, working together at any given time.”

These are often people who have been benefitted from the group’s activities and are now giving back.

“We are supporting about 20 families per month, providing them with dry food, such as rice, legumes, canned food, sauces, as well as cleaning and personal hygiene products,” he says and explains that the challenge is to select among those in need.

“We collect enough food, through donations, to cater for 20 families – but we know about 30 or 40 families in the area who are in need,” he explains.
The recipients of this type of charity are then giving back to the community, offering their know-how, their talent, or just their time and manual labour, to grow vegetables, tend to the small field, cook.

“At the core of what we do is the need for unemployed people to regain a sense of purpose, to feel useful again,” he says, stressing that this makes a major difference in their lives and helps them cope with the challenges of unemployment.

“They learn about solidarity, about giving back, acquiring know-how. We believe that knowledge should be shared, so that we exchange experience and cooperate to create something new,” he enthuses. Not everyone sees this activity favourably. Some of the neighbours around the small abandoned room that they rented to house their activities have been making complaints, mainly because they don’t like seeing migrants and refugees working alongside the Greek volunteers. But the main problem the group faces is financial; they are behind in rent and they may have to leave their space and search for another one.

None of that seems able to defeat Filippos Polatsidis’ optimism about the future of social economy.

“We’ve seen a lot of minor projects come and go – funds are scarce, enthusiasm wears out and the brain drain has driven many energetic young people away. We still need to create synergies, and cooperate to overcome day-to-day problems, for the bigger picture. And we need to get more people engaged.”

To find out more, go to the ‘Pervolarides of Thessaloniki’ Facebook page.