Neos Kosmos speaks with Paul Nicolaou, Director of the ACCI Business Leaders Council, a champion for Greece in Sydney 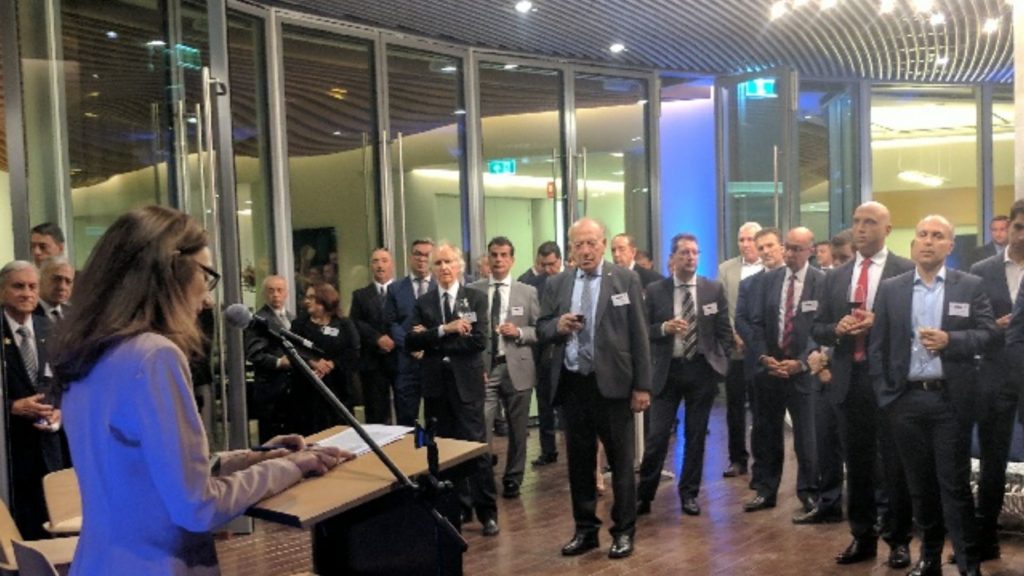 The new Trade Commissioner of Greece in Australia, Katia Gkikiza addressing the guests including 120 members of the Greek Australian business community in Sydney. Photos: Supplied

The Greek Australian business community in Sydney gathered on Monday to welcome the new Consul General of Greece Christos Karras, and the new Trade Commissioner of Greece in Australia, Katia Gkikiza. At the reception, organised by the Australian Chamber of Commerce & Industry (ACCI) at the offices of law firm Clayton Utz, the newly appointed representatives of the Hellenic state addressed over 120 Greek Australian business leaders and informed them about the current political and economic climate in Greece, and outlined their priorities and objectives during their tenure in Australia.

“It was a great opportunity for the Consul General and the Trade Commissioner to meet as many people and talk about what their role will be in facilitating business between Greece and Australia,” says Paul Nicolaou, director of the ACCI Business Leaders Council and organiser of the event.

“I have had a close relationship with the Consul General’s office for a number of years and as a philhellene I felt it was important to assist the Greek consulate in engaging with as many business people of Greek background in Australia as possible. We need to not just welcome them to Sydney, but give them a platform upon which to articulate their objectives and what they want to get out of the relationship.”

This has been the latest chapter in an ongoing effort by the Greek government to attract investment into the country, as a way to restart the economy.

Mr Nicolaou has been active in these efforts for quite some time. An active member of the Greek community, both in campaigning to raise money and awareness for Modern Greek studies at the University of New South Wales (UNSW) and as a church president of his parish, he has been a champion for Greece in Sydney.
More importantly, in the past few years that he’s been involved with ACCI, he has been using it as a mechanism to promote business engagement and trade between Greece and Australia.

“Last year, when the Greek Minister of Economy came to Australia, I organised a day conference in which the Greek delegation were able to meet with senior businesspeople of Greek background and they were able to explain what the processes are in setting up businesses or buying property or selling product from Greece to Sydney,” Mr Nicolaou recalls.

“That went really well, though I don’t know how much business actually happened as a result of that.”

This is of course the main issue – how to get a tangible outcome out of these meetings and talks.

“There is a lot of desire to help Greece and do business in Greece but there are a lot of problems,” says Mr Nicolaou, stating bureaucracy and red tape as the main obstacles that Greek Australian businesses are struggling with.

“We need to articulate it to the Greek government that things need to change in order for Australian businesses to do business in Greece.”

But what is it about Greece, that makes it appealing for Greek Australian businessmen?

“A lot of it has got to do with pride,” Mr Nicolaou admits.

“Many people are very upset with what’s happening in Greece and they want to do their bid to help the Greek economy. A lot of people my age are going on holidays to Greece because they want to spend their money in the country, they want to find their heritage and culture and give something back.”

But there’s more to it, apart from the philhellenic aspect. As someone who has been known to promote Greece, what would he say to a non-Greek business thinking of investing in Greece?

“I’d encourage them to explore these opportunities, whether it is buying land, or buying buildings or investing in agriculture; Greek farmers have made great progress and are producing very good quality products,” he says.

“I want Australian businesses to see that there are opportunities in Greece, and I don’t see why it is just the Chinese and Russians and Germans who can benefit out of it.”