Southwest Crete has its own unique identity: isolated hamlets along a pristine coast – and inland villages marked by history and heroism 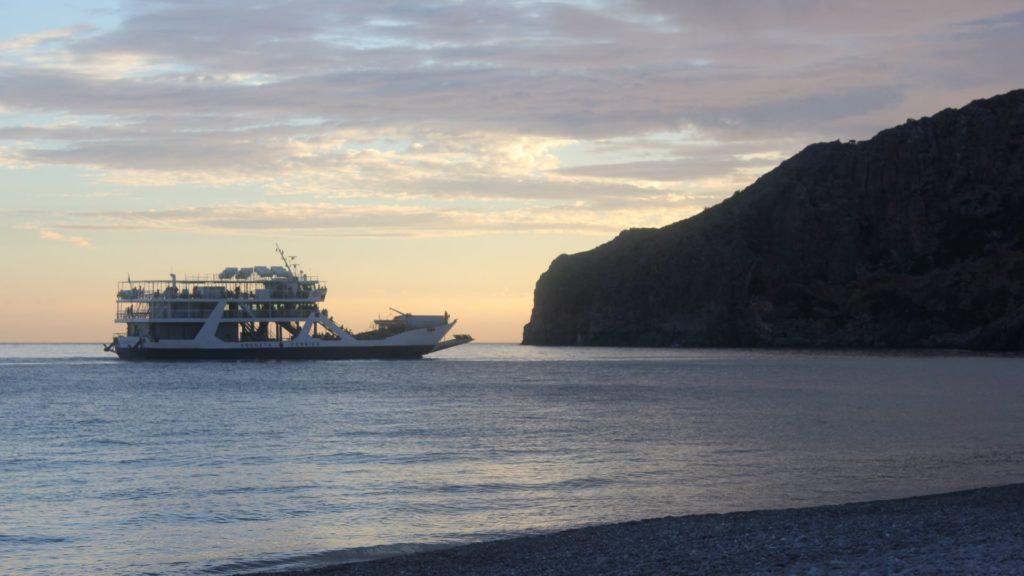 On a late afternoon in early spring there aren’t many passengers disembarking the Samaria ferry at the windswept jetty. The sun is setting and the tiny harbour is in shadow as the ramp goes down with a deep metallic thud on the concrete slipway. A few cars and trucks pick their way off. Beside them a handful of locals and hikers amble towards the village of Sougia.
It may only cost a few euros, but make no mistake, on a calm, sunlit sea, taking one of the Anendyk ferries that ply this coast, is one of the great Mediterranean travel experiences.

Below the southern edge of the White Mountains that form a towering curtain which falls to the water, the flat-bottomed Samaria and its sister ship the Daskaliogiannis have been the lifeline of the tourist economy here for decades.

The ferries connect Chora Sfakion and Paleohora, with stops at Loutro, Agia Roumeli and Sougia. With more than 140,000 hikers a year walking the Samaria Gorge, pulling them out at its southern exit is all down to the legendary Anendyk service.

Sougia, the port of call between Agia Roumeli and Paleohora, was, as the tourist guides say, ‘discovered first’ by Scandinavian visitors in the 1970s. Today it still caters for those in search of a simple refuge off-the-beaten-track. With its long pebble and sand beach, a single waterfront promenade shaded by tamarisk trees, and a handful of beachfront cafes and tavernas, this is ‘the Sougia experience’.

Most accommodation is found off the single road that leads into the village. Just pensions and small hotels; Captain George’s Studios, Idomeneas Apartments, and the Syia Hotel are three of the best.

While Sougia’s comforts make for the archetypal Cretan seaside retreat, here in the former province of Selino it is inland, where those in search of poignant history will find the richest trails. Not least in the villages nearby. Their stories of heroic resistance, dating back to Venetian and Ottoman times, and during the occupation in World War II, are some of the most moving in all of Crete.

Wartime resistance
The cataclysm that engulfed Crete between 1941 and 1945 was felt grievously in Selino. In June 1941 German reprisals against its capital Kandanos, where 180 people were executed and the town razed to the ground in the immediate aftermath of the Battle of Crete, remains one of the most horrific war crimes perpetrated in Greece during the war.

Following this and other infamous Nazi actions in the area, it is little wonder that Selino grew to become one of the most active centres of resistance on the island.

As the occupation unfolded, by November 1942 local andartes were being assisted by Allied agents to undertake reconnaissance and sabotage, and to protect the single Allied radio transmitter operating in western Crete that was sending vital information on German troop dispositions and naval movements to Allied command in Egypt.

With Rommel’s campaign in the Western Desert partly reliant on supplies channelled through Souda Bay and Maleme, such intelligence was vital for the Allies in Libya and Egypt.
Nowhere was the resistance in Crete’s west more active than in the mountain villages that lie just north of Sougia – Koustoyerako, Livadas, and Moni. In 1943 and 1944 these hamlets became central to the struggle, and they have a profound connection to Australia and New Zealand, for it was here that Anzac troops who had fought in the Battle of Crete were protected – for years in some cases, and others engaged in legendary resistance actions. The more than 140 local partisans who became known as ‘the Selino gang’ came largely from these villages, and in July 1943 they were joined by a New Zealander, Staff Sergeant Dudley Perkins. ‘Vasili’ as he was known to the Cretans, had been infiltrated into western Crete to assist British SOE agent Xan Fielding.

In late September 1943, German troops surrounded Koustoyerako hoping to find arms and to capture the town’s men. Finding none, the Germans lined up women and children in the town square. Infuriated by their silence when asked where the men were, the troops prepared to carry out a mass execution. Just before they began firing, one andarte, Constandinos Paterakis, looking on from a bluff above the village, shot the machine-gunner dead. As he did so, the soldiers nearby were hit by a fusillade of partisan bullets, whilst others fled the scene. The massacre had been averted, but retribution came just days later, when Koustoyerako, Livadas, and Moni were burnt and some 40 villagers killed.

It was after these events that Perkins, who had not been in the area at the time of the attacks, vowed to help in the villages’ recovery, and to equip the andartes with the skills to defend themselves and their community even more potently.
Within weeks he had helped forge them into a hardened fighting unit – and one that went on to create severe problems for the Germans in a series of battles in the region in the months that followed.

Such was the impact of the Selino gang on the occupiers’ psychology that by February 1944 agents from the Athens-based German counter-espionage team Unit 3000 had been tasked to eliminate Perkins and his men.

After a firefight near Kaloyeros at the foot of the Keratidias gorge, Perkins was killed, alongside andarte Andrew Vandoulas, in an ambush on 28 February 1944. Vasili, ‘the Lion of Crete’ had fallen, but he would be forever remembered.

As you drive the winding road up the valley to Koustoyerako, a monument to the three villages’ wartime story and the defiant resistance they showed stands sentinel over the valley.
Each October townsfolk gather here for solemn commemorations, honouring those who fought and fell. Another sombre monument is found on the main Sougia road at the Koustoyerako turn-off. Covered in names, it remembers the scores of local men who were rounded up by German forces in early 1944 and transported to Maunthaussen concentration camp in Austria, where many of them died.

Sougia War Museum
If it’s not open, ask at the nearby Rebetiko Taverna for the key to this small lovingly-kept museum that has a unique collection of fascinating photographs and artefacts relating to the Selino gang and local resistance to the occupation.

Tripiti Gorge
A small cove six kilometres east of Sougia played a remarkable role in Crete’s Anzac story. In May 1943, the secluded gorge would provide the evacuation point for Australian and New Zealand soldiers in the last secret extraction of Allied troops – soldiers who had been on the run in Crete for two years.Visiting the gorge requires a demanding three-hour hike from Sougia, or a trip by boat is available from Sougia’s Captain George water taxi.

Village comfort in Moni
For those wanting tranquillity and a more luxurious option than the cheap and cheerful rooms on the coast, one accommodation choice stands out.
In Moni, the Monastery Estate Guesthouse comprises five elegantly restored village houses, now luxury self-catering apartments. Opened in 2013, the buildings that make up the estate date back to the 1830s and were the home of the Vourakis family, who can trace their lineage back to the 13th century. For centuries the Vourakis clan were olive oil producers, wine makers, and shepherds. Today the property is owned by George Vourakis, who returned to Chania from Athens six years ago to tap into the ever growing local tourism industry. George’s right-hand woman is Konstantina Papadaki, the property’s manager. Konstantina says the philosophy behind the business is that centuries-old tradition synonymous with Crete –philoxenia – the bestowing of friendship on strangers. “Our aim is to provide unique accommodation, hospitality and quality food, in an environment where a visitor is treated like a friend,” says Konstantina. The estate’s guests are largely drawn from northern Europe. Visitors from France, the UK, and Germany, predominate, lured by the natural beauty and deep history of the area – and the chance to savour a traditional if pampered Cretan lifestyle.