Writer, poet and teacher Yota Krili talks about her play Christina’s Case, inspired by the 1978 Social Security Scandal – and its traces in today’s Australia 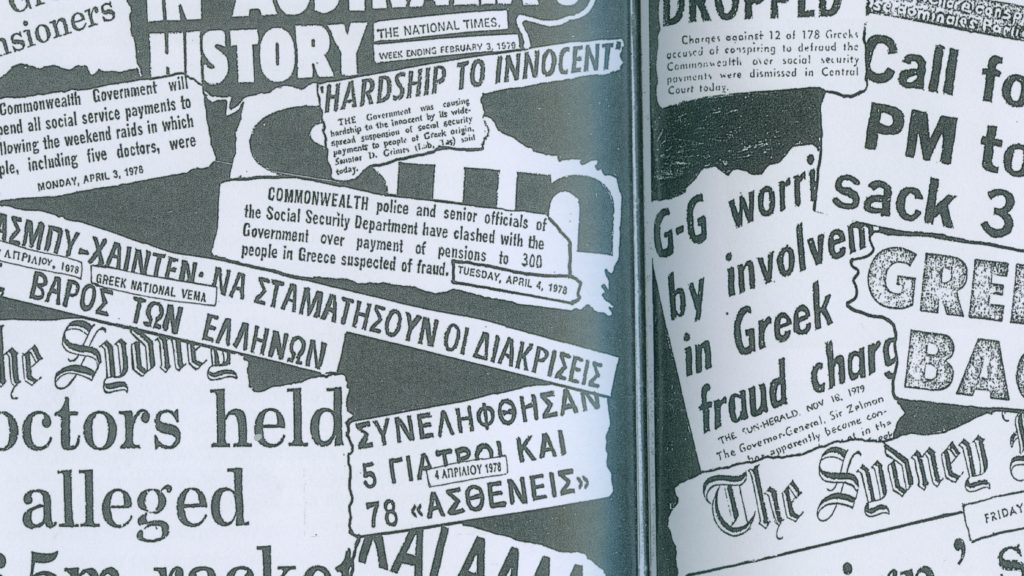 This year marks the 40th anniversary of one of the darkest pages in the history of Greeks in Australia; the ‘Social Security Scandal’. On 1 April 1978, the then Commonwealth Police (COMPOL) raided 160 homes and five medical practices in Sydney and arrested people, accusing them for conspiring against the Commonwealth to commit a large-scale welfare fraud. The case eventually collapsed, proving to actually be one of the landmark cases of large-scale racial profiling on the part of authorities. Acclaimed writer and poet Yota Krili, a passionate advocate of Greek literature in Sydney, wrote a play at the time which was finally published in 2016. Speaking to Neos Kosmos, she talks about it – and about the deep trauma that this case left to the Greek Australian psyche.

How did you decide to write this play? What was the spark?
Let’s go back to 1978, in Sydney. On the 1st of April, that April Fool’s Sunday, media started making noise about the ‘Social Security Scandal’ – or ‘kolpo’ – branding it as “the biggest conspiracy in the history of Australia.” This incident had created a turmoil in the Greek community and has been the inspiration for the play. At the time, I tried to meet some of the people involved in the case and I interviewed two men and a woman. Two of these interviews were printed in 1979 in Giofyri magazine.
I was shaken and infuriated by the victims’ tragic stories. These were helpless people, who got arrested at daybreak, without a warrant, dragged into detention and courtrooms, going through suffering and humiliation without knowing the reason, without having proper grasp of English, so that they could understand what was happening. I wrote about the case to do them justice and present the truth. In retrospect, of course, I realise that my intention was naive. My play Christina’s Case, which I wrote at that time, in haste, did not go anywhere, it was never staged. It stayed shelved for almost 40 years and I lost touch with these people, being busy with work and other obligations, so I don’t know what happened to them. What matters for me, personally, is that this play pays tribute to these victims. I also consider it a significant contribution to the history of the broader Greek Australian community. The usual tendency is to acknowledge and reward people’s success stories – the failures are not mentioned.

Why did you choose to write a play and not a novel or some other kind of literature?
In essence I did not choose anything; I was not even a writer, at the time I was perceived as an activist. I think I chose the theatrical structure intuitively, due to the fact that all people involved communicated through dialogue. I have to add that I re-edited the play during these past decades, as well as prior to its publication.

What do you aspire to achieve with it?
My initial aim was to bring justice for the people who were victims of this scandal. Since the play was never produced at the time, it failed to achieve its goal. What I wish today is for my work to be acknowledged and your paper’s interest is heartening. Having said that, I believe that books are like children: if they have merit, they advance.

Why did you write it in both English and Greek?
Simply because Hellenism in Australia lives in a bilingual society, in a bilingual reality. I am a firm believer in bilinguality and I try to write in both languages. What do the characters of the play represent?
The characters are creations of my imagination. The play is mostly based on the interview I had done with this woman that was a victim. The character is mostly fictional, but I’d say that all characters are a reflection of the Australian society at the time. On one side, we have the police that represents power and tries to protect its interests, and on the other side, the citizens, falling victim to a short-sighted, biased scheme of racist undertones.

Christina herself is the embodiment of Greek values, as a whole; what is your perception of these values?
For me, the role of Christina represents human values that are also Greek. In the unexpected meeting between Christina and Emer (who is also a victim of different circumstances), the prevailing sentiments are those of compassion, empathy and understanding; the two women identify with each other, relating through their challenging situation. Christina is facing an authority that shredded her to pieces and made her feel annihilated. She resists, as much as she can under the circumstances, defending her dignity, honesty and reputation. I think that these human values are eternal. They were strong then and they remain strong today. Time passes, life’s conditions change, human behaviour may change as well, but in my humble opinion, human values and human emotions remain the same. I don’t think that people’s frame of mind has changed since ancient times.

Who would Christina be today?
Unfortunately, there are lots of women who are tortured and humiliated around the world today, in conditions rather different than the ones Christina faced. There are more than 60 million refugees around the world and women are suffering in refugee camps. They are victims of slavery, something that was abolished in the 19th century and it has now revived.

For more information on Yota Krili and her work, visit www.yotakrili.com