‘With the older generation, there’s always something to learn’

Spirit of Hellenism Delphi Bank award winner Alex Vounisios speaks to Neos Kosmos about how engaging with an older member of the Greek Australian community opened his eyes to the struggles of migration, and reignited his passion for his heritage 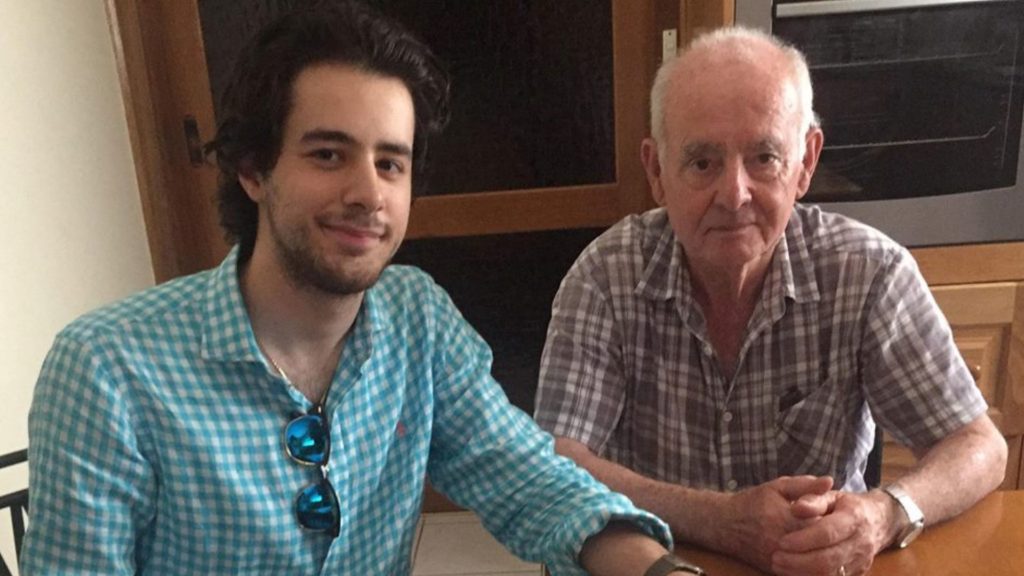 Alexander Vounisios has always been drawn to people, and stories. So when he happened upon the Spirit of Hellenism Awards in a copy of Neos Kosmos, he jumped at the chance to interview a senior member of the Greek Australian community.

The competition, run by Hellenism Victoria for the second year in a row, is open to young people aged 15 to 25, and all about bridging the divide from one generation and the next by encouraging young people to find out about the contributions made to Australian society by Greek migrants, and subsequently connect with their cultural heritage.

Unlike many other entrants who saw it as an opportunity to delve deeper into the lives of their grandparents, Vounisios opted to interview a volunteer at Fronditha Care, which brought him into the life of Anastasios Bardakos.

Having migrated to Australia in the late 60s from the Peloponnese, it was a visit to see his mother-in-law, a resident of Fronditha some 18 years ago, that set off his trajectory to devoting his life to volunteering, and he has been awarded by Aged & Community Services Australia Victoria. On a first name basis with 120 residents, Bardakos established Thursday gatherings, which sees the elderly come together in a kafenio setting with backgammon, mezze, wine, and discussions on politics.

“It was very interesting to sit down with an individual, and just hear what he had to say; how he reached this point in his life where he dedicates so much now to Fronditha,” said 20-year-old Vounisios, who found himself in awe of Bardakos’ dedication.

“His magnetism draws people towards him, and his gentle personality; he’s caring and warm-hearted. It got me thinking, I’d like to be like this person – I think everyone should aspire to be like him and do some volunteering, whether it’s recognised or unrecognised.”

Vounisios submitted his winning entry in the form of a short story about Bardakos’ life, and opted to write it in Greek, not wanting to lose any of the sentiment through translation.

The child of a migrant father, who ventured to Australia from the village of Korinos in Northern Greece, Vounisios is familiar with the migration narrative, but says that it is something he has grown to fully appreciate as he matures.

Now enrolled in science at the University of Melbourne, as he has learned to juggle study and work, and faced with the prospect of establishing a career, he says interviewing the volunteer couldn’t have come at a better time, reigniting his appreciation for the sacrifices made by the generations before him, who left behind all they knew, and thrust themselves into the unknown, with very little, if any, support behind them to establish a future for their families.

“I imagine being told now to go to the other side of the world, and not knowing the language or the people around you; it takes a lot of courage and persistence!” he enthused.
Doing the interview, he says he felt an unmistakable sense of pride for being Greek Australian, and hope.

“Here we have an individual that was uprooted from his home country and is contributing and benefiting the life of the Australian community. It made me realise that there’s still good people out there that are thinking of others. I feel like we’ve turned into a very capitalistic society; we’re all fixated on money, career, that a lot of us don’t take the time to do some volunteering work, to sit with someone and have a coffee to see how they’re actually doing. It really inspired me.”

Vounisios couldn’t speak highly enough of the experience, and encouraged anyone thinking of entering the competition in future. On a larger scale, he sees every entry as contributing to a vast collection of stories that shows and documents the Greek Australian way of life. But on a personal level, says the benefits exceeded his expectations.

“With the older generation there’s always something to learn; they’ve experienced a lot. You can’t learn everything from reading books, it’s more about gaining life experience and knowing what really happened.

“I view them as being very courageous, and heroes. It gives me fuel in life to succeed.”