‘Neos Kosmos’ stands with the First Nations of Australia, with a submission to the Joint Select Committee on Constitutional Recognition Relating to Aboriginal and Torres Strait Islander Peoples One year after the ‘historic’ meeting in Uluru, where more than 250 leaders of Indigenous communities – Aboriginal and Torres Strait Island Peoples at the First Nations National Constitutional Convention presented a ‘Statement from the Heart of the Nation’, their struggle continues.

Their call for the establishment of a “First Nations Voice” enshrined in the Constitution, may have been rejected by the government last October when the PM argued that it would “inevitably become seen as a third chamber of parliament” and would therefore not be “desirable or capable of winning acceptance at referendum”, but Indigenous community leaders have not given up.

As a result, Prime Minister Malcolm Turnbull and Opposition Leader Bill Shorten have agreed on the scope of a new parliamentary committee that will seek to find “common ground” and work towards a successful referendum on Indigenous recognition in the constitution.

The Joint Select Committee on Constitutional Recognition Relating to Aboriginal and Torres Strait Islander Peoples has undertaken the task to seek “options for constitutional change and any potential complementary legislative measures” that will satisfy Indigenous Australians and secure the support of the Parliament and public. The 11-person committee will present an interim report by the end of this month, with its final report due to be presented on 29 November.

So far, 296 submissions have been made to the committee by individuals and organisations. Neos Kosmos has joined this effort, spurred by our commitment to the Hellenic ideals of freedom and democracy.

In our submission we endorsed the Referendum Council’s Uluru Statement from the Heart.

Aboriginal and Torres Strait Islander peoples must take their rightful place in their country, as its original inhabitants. We want Indigenous Australians to have power over their destiny and know that their “children will flourish” and like Greek Australian children “will walk in two worlds and their culture will be a gift to their country.”

Neos Kosmos called for the “establishment of a First Nations Voice enshrined in the Constitution.”

Greeks disagree amongst each other, however, as we write in our submission we are all “bound by our ancient and imperfect custom of democracy.” This Hellenic custom permits argument and always seeks reconciliation. It is our Greek democracy and our love of freedom that is animated in democratic constitutions across the globe.

As Hellenes and with overwhelming pride in our cultural heritage we could not see Indigenous Australians absent as First People in the Constitution of Australia.

We reminded the Joint Select Committee of Pericles’ Funeral Oration of 431 BCE. Pericles, the Athenian leader in the aftermath of the bloody and futile Peloponnesian War, sought to identify that which makes Athenians unique. He identified democracy and justice for all, regardless of wealth and status.
Pericles invited all who died in battle – Hellenes, foreigners, foes and friends – to become citizens of Athens, “So died these men as became Athenians.”

We, the people who gave birth to democracy and citizenship, recognise the sacrifices of Aboriginal and Torres Strait Islander peoples who died defending their nations.

Greek Australians, Indigenous Australians also died shoulder to shoulder defending Australia in World War One and World War Two, we saw the horror of war in Korea, in Vietnam and we continue to put our lives on the line for that intangible, yet powerful notion of freedom.

Aboriginal people fought and died for a nation that segregated them, that did not recognise them for a long time. In World War II, Aboriginal Australians died defending our Hellenic democracy from the brutality of Nazi invaders. We saved Anzacs in the Battle of Crete, and we have always fought for freedom and citizens’ rights.

We, like the Indigenous people of Australia have felt the pain of racism. When many Anglo Australians in the past told us “to go back”, or called us “wog” we’d responded, “The only real Australians are the Aboriginal Australians”. In doing so, we’d reminded everyone that other than the Aboriginal people, we were all from elsewhere. 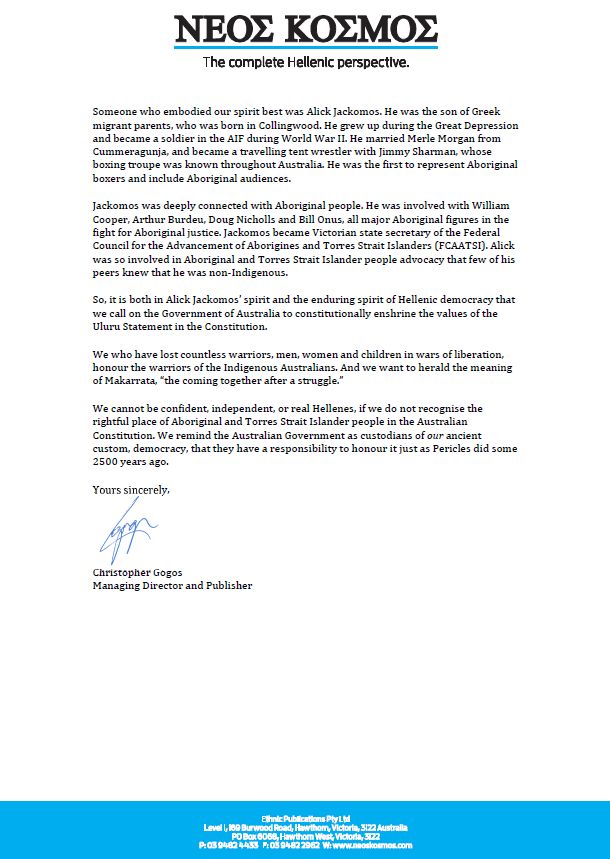 Neos Kosmos recognises Aboriginal and Torres Strait Islander People as our people. In our submission we highlighted the work of a great Hellene, Alick Jackomos, the son of Greek migrant parents, who was born in Collingwood. He grew up during the Great Depression and became a soldier in the AIF during World War II. He married Merle Morgan from Cummeragunja. Jackomos was a real Hellene, in the spirit of all that is Greek, along with William Cooper, Arthur Burdeu, Doug Nicholls and Bill Onus and others who fought for Aboriginal justice.

So, in the spirit of Alick Jackomos, and in the spirit of Hellenic democracy that we called on the government of Australia to enshrine the values of the Uluru Statement in the Constitution.

Greeks and Indigenous Australians, Aboriginal and Torres Strait Islanders, have lost countless warriors, men, women and children in wars of liberation. Neos Kosmos honours the warriors of the Indigenous Australians. And we want to herald the meaning of makarrata, “the coming together after a struggle.”

We cannot be independent, free, or authentic Hellenes, if we do not enshrine Aboriginal and Torres Strait Islander people in the Australian Constitution. We reminded the Australian Government as custodians of Greek democracy, that they have a responsibility to honour this ancient custom, just as Pericles did some 2,500 years ago.

View our submission at aph.gov.au/Parliamentary_Business/Committees/Joint/Constitutional_Recognition_2018/ConstRecognition/Submissions