Imagine a robot traversing a field of crops detecting how healthy a plant is, how much water it needs, what disease it’s carrying, as well as pinpointing and destroying dangerous weeds and pests, all while the farmer sleeps.

Now imagine that the data collected by this automated robot leads to more sustainable food production that is healthier and more diverse not only in Australia, but for Third World countries. You don’t need to imagine because this technology is already here.

For the past two years, George Tsoukalas has been working at the world leading Australian Centre for Field Robotics at Sydney University as a robotics systems engineer.

Tsoukalas was drawn to robots as a child, and hearing him say ‘I build robots for a living’ transports Neos Kosmos to a scene from the film Back to the Future.

“Since I was a kid I’ve always loved robotics,” he says. “I destroyed all my toys as I tried to pull them apart to figure out how they worked, and I also used to plant things as well.
“So for me, working on this project has been awesome. The university creates an environment where you can express your creativity, and our team does have a sense that we can actually affect the world in a positive way. We try not to get too ahead of ourselves, but that’s what a university environment is about – providing solutions to problems, and, for us, that is looking at the agricultural side.”

Tsoukalas’ work at the University of Sydney has been based around a robot named Farmhand. It looks like a mini-tractor but it’s automated. On the back it has a three-point hitch so you can fit implements like sprayers and flamethrowers that kill weeds.

The project is now in its testing phase, but once completed, Tsoukalas says it will provide a number of benefits to the farming industry.

“This robot actually runs up and down a field and picks out the pests,” he says.

“There is a phone that is suspended underneath, and this robot can actually take pictures of a lettuce, and then later on people input the data. After a while it goes by itself, having been taught, and very effectively makes its own decisions about what kind of plant it is, and targets pests.
“So, rather than flood a whole field of vegetables with chemicals to kill pests, farms will be able to produce food that will be a lot healthier, have a lot fewer chemicals, and produce a lot less wastage. It’s a massive reduction in fertiliser, pesticides, and herbicides. People want more organic farming, fewer chemicals in food, more naturally grown produce; and technology can provide that.”

The team is also working on giving Farmhand the ability to track which plants need fertiliser and water, and also avoid killing good pests like bees, making the farming process more effective and better for the environment.

RESPONDING TO FOOD SCARCITY AND LACK OF FARMERS
But it’s not just about environmental sustainability. Tsoukalas says another issue that Farmhand is helping to solve is the problem of a lack of farmers.

“In Australia, most people don’t want to work in back-breaking jobs on a farm and this is also the case in Third World countries,” he says.

“Two hundred years ago, about 80 – 90 per cent of the people living in Australia were involved in farming, today that number is three per cent.
“A farmer’s average age is now approaching the 60 mark, so young people do not want to get into farming. In fact, what allowed three per cent of the people to produce enough food to feed the country is technology. So we have to produce a lot more food out of the same amount of land.”

In Australia, Farmhand is being targeted for use in farming schools, hobby farms, and farms with smaller plots. However, Tsoukalas revealed they have also been testing the robot in Third World countries as well.

“We were on a field trip to Fiji a few weeks ago, and in a few weeks will be in Samoa, and previous to that we have also been in Indonesia,” he says.

“Sometimes the response from farmers is bewilderment and curiosity. Verbally they are very positive and they recognise that this a direction that they will be going to – guaranteed.”

“Pests can have a dramatic effect on their crops,” he says. “A one-week delay can have a huge impact and then they are forced to use an expensive pesticide to kill a pest. Often with Third World countries, they ship things to Australia and New Zealand and there is strict quarantine that no pest should appear in produce.
“Collectively, we are trying to work out issues around food scarcity, or any issues that exist in farming as a collective in our society. We want to create healthy farms and productive farms. If one single farm can produce a lot more food, then you can use less farms to produce more amount of food. That way, more land is available to go back to nature if that is a concern.” 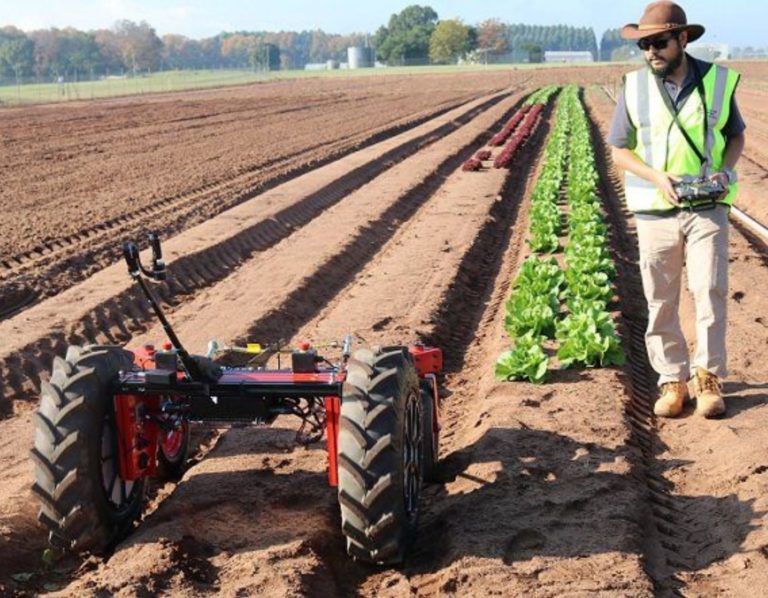 EDUCATING FARMERS – AND ROBOTS
The work being done by the Australian Centre for Field Robotics was featured on the long-running ABC science show Catalyst. Tsoukalas says the exposure was important because his team need to engage with farmers.

“We work in a laboratory and in some ways that is remote from the real application that we do,” he says.

“So it’s very important that we communicate with the relevant interested people and that they know we are open to their feedback.
“We use the feedback to make sure the robot can survive in different environments. That it is not bogged down if it’s wet, muddy or hot. It also has to be repairable. There are also sensitivities for those that consume the food.
“All these aspects have to be considered, and we can’t think them all up. Sometimes it has to be revolutionary not evolutionary, sometimes these ideas have to come from the farmers.”

Robots and AI used to live in science fiction novels and movies, but with innovations like the Farmhand the future is now. American science fiction author Vernor Vinge once wrote that ‘We are on the edge of change comparable to the rise of human life on Earth’, and Tsoukalas feels that we are close to standing there now.

“I do sense a bit of that,” he says. “When I did computer science, I was writing software which was simple in context. The programming was if A happens then B happens. But computers are no longer programmed in that sense. They are more programmed to be taught.
“It sounds simple, but it is extraordinary, in a sense, that robots are programmed by their programmers to teach computers. We are not there yet, but we are pretty confident that as Farmhand goes up and down fields, it will be able to detect crops with all the images uploaded into the cloud. The AI will then be able to analyse the crop and analyse any problems.”