‘There are still around 1,600 people missing. These people are mothers, fathers, brothers, sisters, sons and daughters … 44 years is far too long to still be waiting for a solution’ It was 15 July 1974 when the then Greek military regime attempted to unite with Cyprus resulting in Archbishop Makarios being overthrown and fleeing to Britain.
In response, on 20 July Turkey instigated an army invasion for fear of a Greece and Cyprus ‘enosis’ that could potentially jeopardise the Turkish Cypriot community.

A ceasefire was reached on 23 July 1974, however, in those three days, the island of Aphrodite was partitioned, with Turkish troops occupying the northern part of Cyprus.

Since then, a green line buffer zone signifies the division, stretching all the way from the tragic village of Morphou to Amohostos. Up to this date, it is mined and patrolled by United Nations (UN) peacekeepers.

More than 160,000 Greek Cypriots fled to the south during the attacks.

Less than a year later, in February 1975, Ankara announced the establishment of the Turkish Federated State of Cyprus, appointing Rauf Denktash as president.

On 15 November 1983, Turkish Cypriots unilaterally declared their independence under the name of the Turkish Republic of Northern Cyprus, a motion that was rejected by the UN, Greece, and the Republic of Cyprus.

The UN has been initiating peace talks between the two sides while Cyprus’ eligibility for EU membership is still pending, as there has been no progress regarding reunification talks. 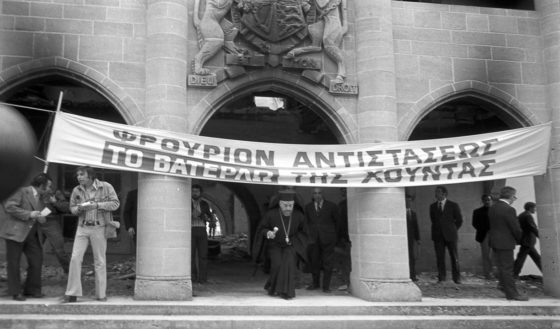 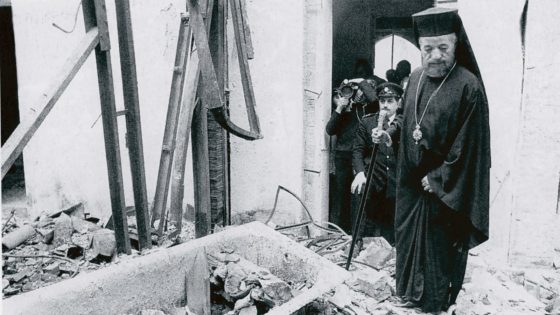 On the day of the tragic anniversary, the chair of Constitution of the Pan-Australian Coordinating Committee – Justice for Cyprus (PASEKA) Konstantinos Prokopiou said, “Let’s show everyone that we do not forget and that we demand justice for Cyprus.”

Mr Prokopiou stressed that “this year is very important for the motherland, our pretense and our dynamic participation in every event organised by the coordinating committees, especially in the protest about the Turkish invasion and the illegal occupation of Cypriot and European soil; [it will] help and ease the talks for a fair solution to our national issue.

“… for 44 years the death-stricken and relatives of the missing have been waiting for their loved ones in vain. The refugees still long for the day that they will be able to return to their homes, their belongings, reclaim their fortunes and their rich cultural heritage in safety, under UN law. Those trapped are suffering under the oppressor’s boot, but refuse to abandon their sacred ground.
“We all hope for a fair and viable solution that will reunite the island and grant its citizens the right to return to their heritage homes where they will enjoy the benefits of the European Union, the Commonwealth, and the UN (…) We all hope that talks will resume now that the Turkish elections have concluded,” Mr Prokopiou said, highlighting his fears for Turkey’s recent provocative behaviour and threats toward the Aegean islands and Cyprus, in addition to the daily border violations it commits against Greece.
“Coordinating committees for Cyprus are continuing their fight across all Australian states hoping that with the help and participation of the Greek Australian communities to the Cyprus commemoration events the message that we have not forgotten the injustice that has been committed against Cyprus and that we won’t allow foreign diplomacy and propaganda to succeed. We will also not accept Turkey violently stealing even one Greek isle.”

Moreover, SEKA chair Kostas Sokratous suggested that “the UN should push Turkey harder” stressing that the Cyprus issue is entering yet another crucial period under a new reality.

“The re-election of Erdogan has caused worry in the western world and Cyprus.
“How high on the list of his priorities does Cyprus sit, and what will be his policy when he decides to reopen this chapter?,” he wonders.

“For 44 years, Turkey has been trying to subject Cyprus to its military control and refuses to conform to the UN’s decisions continuing to violate human rights, claiming and threatening.”

Mr Sokratous said that the Greek Cypriot diaspora is still hopeful of a resolution and they will continue their efforts until they see Cyprus unified.

“We are calling [upon] Australian politicians to do everything in their power to see the Cypriot people’s demand for a peaceful and fair resolution of the Cypriot issue realised.” 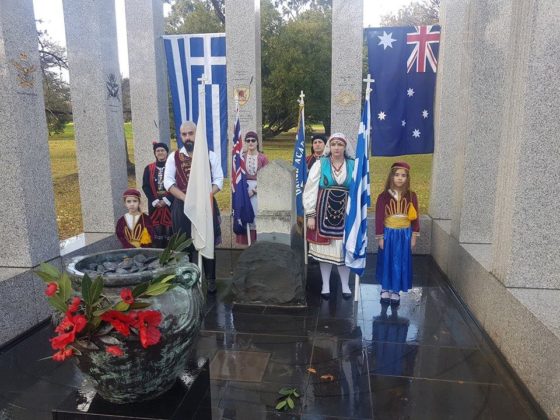 From the wreath-laying ceremony in Melbourne earlier this month. Ekaterini Xagorari, Ambassador of Greece to Australia, also sent out a heartfelt statement, with her main point being that it is imperative that Turkish troops withdraw from the occupied part of the island.

Ms Xagorari made a point that the obsolete 1960 treaty should be abolished for reunification to move forward without being compromised.

Among the Greek diaspora and Australian officials to comment on the anniversary was leader of the Victorian opposition Matthew Guy MP.

“On this occasion we come together to commemorate and reflect on the tragic events of 1974, which resulted in the displacement of thousands of Greek Cypriots from their homes,” Mr Guy said.

“Over the years, numerous attempts have been made to find a peaceful resolution, but to date none have been successful. Yet the pain and sorrow for so many displaced Greek Cypriots, both in Australia and around the world, still remains.” At the 2018 NSW Commemoration dinner. Students attend the wreath-laying ceremony after the march in NSW.

Speaking to Neos Kosmos, the state leader of the Liberal Party continued to say that his party believes that a resolution to this issue is of utmost importance, and supports a just and long-lasting settlement in accordance with the relevant UN resolutions.

“Victoria is grateful to our Greek Cypriot community, many of whom are victims of the tragic events of 1974, and who continue to shine the light of remembrance on these events in a harmonious and peaceful manner.
“Victoria is proud to be home to thousands of Greek Cypriots who have contributed significantly to our social fabric, and the development of our state.
“I wish all those participating in the commemorative events all the best for the future, and I hope that a clear and just solution to the Cyprus issue can be found soon,” Mr Guy concluded.

Federal Member for Hindmarsh Labor MP Steve Georganas did not shy away from commenting either, following the 44th memorial and wreath-laying ceremony for the Turkish Invasion of Cyprus at Saint Anthony’s Greek Orthodox Church in South Australia on 15 July.

“In 1974, as we all know, the island of Cyprus was occupied – and 37 per cent of that island still remains occupied. Since then, a so-called state has been declared, but it has been recognised by only one nation in the entire world, and it just happens, ironically, to be the nation that invaded in 1974,” Mr Georganas told Neos Kosmos.

“There are still around 1,600 people missing. These people are mothers, fathers, brothers, sisters, sons, and daughters. We have, in that 37 per cent of the island, homes where the owners have not been allowed to return. They are still not allowed to return, and 44 years is far too long to still be waiting for a solution.”
Mr Georganas went on to outline issues that many Greek and Greek Cypriot members of his electorate of Hindmarsh have raised with him.

“When you travel to Cyprus, as I have many times, both as an individual and as part of a parliamentary delegation, it is an absolute tragedy to see the situation that exists,” he emphasised.

“I have travelled along the green line, the demilitarised zone, that divides the island, [and] spoken with the Australian UN peacekeepers who have made such a wonderful contribution to patrolling this zone since 1974.
“It is really disappointing that the current federal Liberal Government has cut the Australian contribution to peacekeeping efforts, and that they failed to recognise the important contribution our peacekeepers were making.
“This was one way Australia made a significant contribution, but we can play a bigger and better role. Most importantly, Australia can play a role in providing for the implementation of UN resolutions.
“I hope that discussions continue, and that parties go back to the table so we can see that just solution which has been so desperately needed since 1974, since the island was divided, achieved. I hope and pray that one day the communities will live in harmony together,” he said.

Meanwhile, Federal Member for Calwell Labor MP Maria Vamvakinou expressed the majority of the Australian Government members’ wishes, and said that they will support future efforts aspiring to reach a bilateral agreement for the unification of Cyprus.

She said they want “A solution that will correspond to and service the will of the people of Cyprus, that will unify our Cyprus with the hope of a better and fairer tomorrow for all Cypriots, without green lines, road blocks, fences, occupation troops, buffer zones and lost homelands.
“In the light of the 44th year since the division of the island, all of us who care and ache for tormented Cyprus and its people should contribute to change what has happened, and abolish the status-quo that keeps the island divided.”

* On Sunday 22 July from 12 noon there will be a demonstration starting in Lonsdale Street near the Greek shops, to Parliament House at 1.00 pm.
Outside Parliament House, speakers will address the rally, demanding the withdrawal of Turkish occupation troops from Cyprus so that the island can be reunified. Representing the Cypriot Republic will be the president of the Democratic Rally party Averof Neofytou, and Cypriot Navy secretary of state Natasa Pilidou.

*The scheduled annual rally outside the Turkish Consulate in Melbourne will be held on 14 August. As Mr Sokratous told Neos Kosmos, the date has been moved to “commemorate Turkey’s second invasion to Cyprus”.

“It was on this day, 44 years ago that ‘Attila 2’ took place, seeing Amohostos, Karpasia, and Morphou occupied, and the residents become refugees. It was also on 14 August 1996 that 26-year-old Solomos Solomou was shot dead by the same Turkish soldiers that murdered his cousin Tasos Isaac in Derinia during an anti-occupation motorcycle protest. Solomou had crossed into the buffer zone and tried to take down the Turkish flag.”