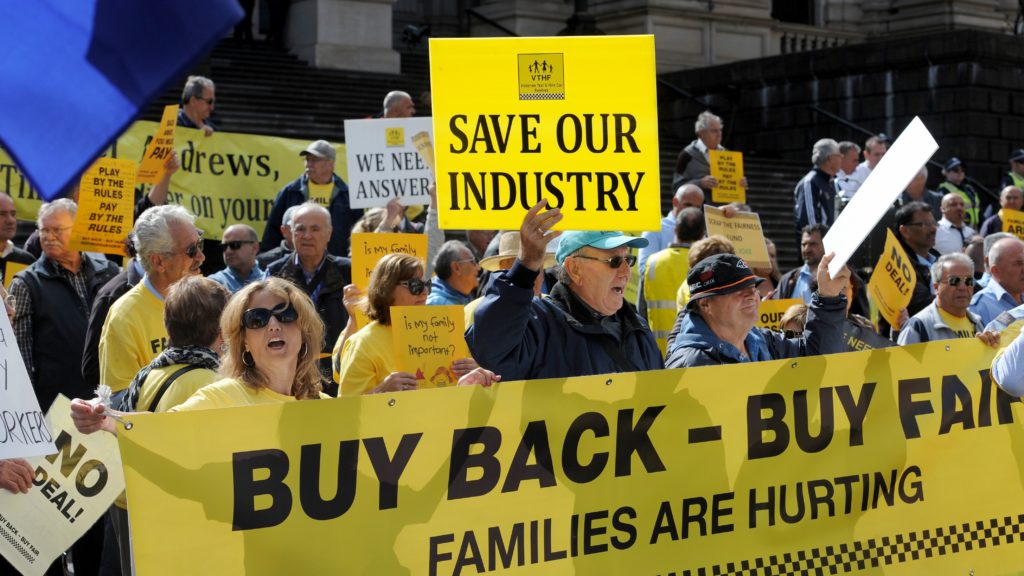 Taxi drivers have been protesting against the industry deregulation for years, with a series of actions, like the one depicted in this photo, taken outside Parliament house in Melbourne on Monday 13 February 2016. Photo: AAP Image/Joe Castro

Not many of us are sitting around the table when the meeting takes place, but the room is heavy with rage, disappointment, frustration for an “unprecedented injustice” that hasn’t happened anywhere else in the world; a phrase that everyone in the room keeps repeating, again and again.

Hundreds of people around me, and many more not present today are in despair. They have not only lost their fortune, their income; they have lost their trust in this country where they spent and eventually sacrificed their most productive years. Many of the people in the room have been living and working in Australia for over 50 years.

The Labor government’s decision to abolish taxi licences, introducing a single registration for taxis last year, has, as a result, deregulated the taxi industry. By introducing hire cars and ride-share services like Uber the consequences have been destructive for many, leading several taxi drivers to bankruptcy. Families have been disbanded, mental health has deteriorated and we have even seen suicides.

The people I met up with in Oakleigh are wallowing in injustice. They suddenly saw their income and capital evaporate and their hopes perish as the banks resorted to selling their homes or asking for more collateral since their licences’ had been devalued.

“Andrews shook my hand, looked me straight in the eye before the election and promised to support us; to do the right thing. So did the Greek candidates back then, the ones we got elected with our overwhelming support and they didn’t even lift a finger to prevent this predicament.

“What was the ‘right thing’? To eradicate the labours of a lifetime from one day to the next,” he wonders.

“We offer a seamless industry of passenger transport, creating 3,500 new jobs. We change the way Victorian citizens commute by providing an array of options, less waiting time and more safety,” a Labor spokesperson said in a statement to justify the government’s decision to shake up the taxi industry.

“What were they even on about?,” Vasilis Christopoulos argues. “Work has halved. Before opening the trade there were 5,500 taxis in Victoria. Now we have over 10,000 let alone public servants driving for Uber every Friday and Saturday.”

“Personally, I had three taxi licences and I lived off those. Today I don’t feel secure. I’ve had to start driving again, this time for a company. I’m 72 years old,” he says adding that “compensating taxi licence holders by paying $100,000 for their first licence and $50,000 for up to three others is not only unfair but also absurd. All the licences cost the same. They were obtained with hard work and sacrifice. Why does the government choose to compensate half the worth of some and completely ignore others?”

“The Andrews government has taken away my children’s bread and butter and will pay for it,” 54-year-old Giorgos Kollios says.

“I was born here and I want to leave my country of birth. I’m more hurt for the first generation. For the people who came here with nothing and after a lifetime of struggle are again, left with nothing. The difference between then and now is that back then they were young and the future was before them. Today, in their limelight, it is impossible for them to regain what they have lost. They speak of an Indigenous ‘stolen generation’ they should add the ‘stolen fortune’ of the migrants to the history books. The Victorian state government and Prime Minister Daniel Andrews have stolen the labour of migrants. I have sworn to fight for justice, especially for those people, the first generation migrants like my father who came to Australia with five pounds. Labor does not support the labourer, the simple man, but big interests. Personally, I will exhaust every effort to ensure they do not return to power in November. They will have to pay for the crime they have committed,” Kollios concludes.

“We don’t matter to them. It’s like a thief entering your home and stealing whatever they set their eyes on,” complains Giorgos Palivanis, former taxi driver and licence holder.
“We trusted them and they betrayed us. They deprived us of our income, our savings (…) we were the easy – in their opinion – targets. They will have to pay for this with a massive defeat in the November election,” Palivanis says.

Tasos Revis, who has been in the taxi industry for half a century has gone through all the stages. He has worked as a driver, taxi owner, taxi company manager; he acquired his first taxi licence back in 1960.

“They stole my superannuation,” he says. “No one, not a single person expected this development, to see the licences abolished in such a way, totally unfair and irrational, without even a fair compensation”.

“What we demand from the Labor Party – who went forward with an unprecedented act – is to make this up to us and restorer what we lost. By abolishing the taxi licences they abolished our financial stability, our fortune. We had demanded via the Victorian Taxi Association $250,000 for each licence. They ignored us, yet, they allowed Uber to roam the streets illegally for four years letting the value of our licences drop vertically and then they decided to strike harder those who had already been affected. Now it has become a reality: financial destruction for those relying on their licence as a source of income, families torn apart, mental health issues and suicide. We must demand this injustice to be repaired to avoid mourning more victims,” Revis adds.

Ester Demian, president of Taxi Action Group Victoria focuses on the most tragic outcome of this dire situation, a woman’s suicide. Mrs Kotevski, unable to witness her home being auctioned, fell onto the Reservoir train tracks on 19 June at 2.30pm.

“I received the news of her death, from her husband, Ciro Kotevski. He called me the next day. I listened to him holding my breath. He told me that from the moment the Andrews government gave the green light for these changes in the taxi industry, his wife’s health who was a post office employee deteriorated to the point she could no longer go to work. They had set the licence as collateral for a bank loan which was not payable based on the compensation provided by the state government. On Monday 18 June, the couple was contacted by the bank that announced they were going to auction their home. They were both speechless. The next day, while Ciro was having a chat with a friend, his wife got ready to go out.

‘I’m going for a walk,’ she said making it clear she’d rather be alone. That was the last time he saw her alive. An hour later he received a phone call from the police. She left behind a 19-year-old son and an18-year-old daughter. Her husband insisted his wife’s death was a result of the government’s decision,” Demian stressed.

“We expect the Liberals will honour their word and correct the injustice we have suffered providing taxi owners with a fair compensation,” concludes Nikos Badounas expressing what thousands of his colleagues, many of whom are Greek, demand.