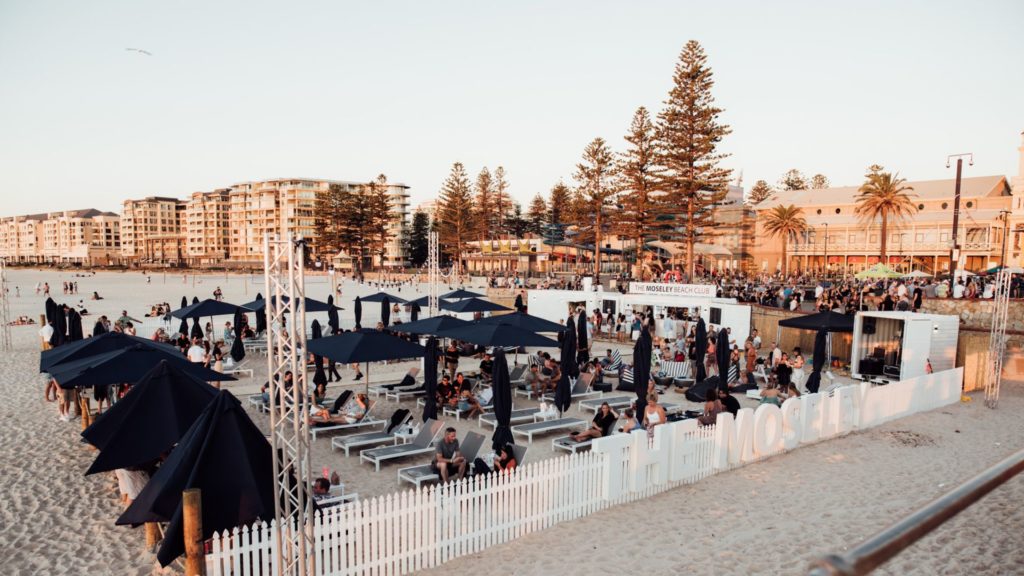 Inspired by the premium offerings of Mykonos, Nice, Capri and other seminal European coastal destinations, Australia’s first licensed beach-front getaway, The Moseley Beach Club, will return on the Adelaide metropolitan foreshore of Glenelg Beach for the second consecutive year this summer, after last year’s successful run.

“We’ve been thrilled with the overwhelming positive feedback over the past couple of weeks, whilst discussing the approval with the local council,” RD Jones Group’s Director of Operations, Luke Donaldson, told Neos Kosmos.

“The innovation and progressiveness shown by the City of Holdfast Bay Council supporting the return of the Beach Club is greatly appreciated. Thanks to them, we are in a position to offer South Australians the opportunity to enjoy a drink on the beach in a relaxed and family-friendly environment and the people’s response after our official announcement is evidence that this is what Australians want.”

Operating daily from November 16, 2018 through to March 17, 2019, the 350-capacity venue will spread out across 750sqm of beach space just north of the Glenelg Pier, offering eight premium sunbeds and 48 luxurious sun lounges complete with umbrellas and serviced directly from a dedicated bar and kitchen facility, with ever-present security; furthermore, a program of live acoustic music sessions will add to the enjoyment of patrons embracing hot summer days and warm balmy nights, in a setting that was modelled after similar ventures in Greece, Spain and Italy.

“We drew our inspiration from established beach bars around the world and although it was a long process that cost us hundreds of thousands of dollars and a huge amount of time and effort, we are very pleased with the overwhelmingly positive feedback we have received from all those people who have embraced our project,” says Mr Donaldson.

The new beach-side offering was made possible largely thanks to the support of members of the Greek community, who pushed for it to be approved; after last year’s success, it is now being viewed as a potential blueprint for similar operations around Australia.

“We’re proud that more than 30,000 people visited the Beach Club last year, while this year we are anticipating that more than 50,000 will visit us due to the extended season. We are also optimistic that having the Beach Club operate on a daily basis will attract more foot traffic to fellow Jetty Road traders,” says Mr Donaldson.

The Moseley Beach Club has already welcomed thousands of visitors and operates as a pole of attraction for international tourists and interstate visitors, while it also appears that the cosmopolitan venue has already contributed in boosting the local economy by increasing both the overall traffic in the area and business performance. This year, it is expected to create 40 new jobs in the area.

“Our commitment to the community is of great importance and our aim is to work with as many local traders, suppliers and producers as possible whilst preserving the environment,” says Mr Donaldson.

“We look forward to bringing the world’s attention to Glenelg and showcasing South Australia. After all, life is better at the beach.”