FYROM would have accepted ‘North Macedonia’ 10 years ago, Wikileaks reveals

‘New Democracy is not going to ratify this agreement,’ insists Kyriakos Mitsotakis The basic term clarified in the cable titled ‘What the Macedonians need to resolve the name dispute’ and dated July 29, 2008 was to secure the recognition of the “Macedonian” language.

The cable compiled by the then US Ambassador to the neighboring country, Gillian Milovanovic was in fact very similar to the joint deal that was signed by FYROM and Greece in the Prespes Lake region back in June.

In the leaked cable, Milovanovic presents her conclusions following meetings with FYROM’s leadership at the time, President Branko Crvenkovski and Prime Minister Nikola Gruevski, as per below: 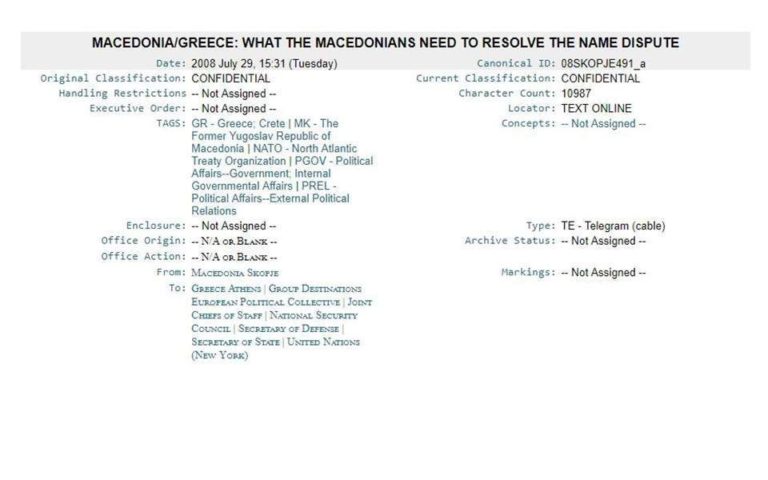 Meanwhile, Greek opposition leader Kyriakos Mitsotakis reiterated his promise not to sign the deal reached between Skopje and Athens.

“Today’s revelation from WikiLeaks, that Skopje had been asking since 2008 to name their country ‘North Macedonia’ and their people ‘Macedonians’ who supposedly speak the ‘Macedonian’ language confirms in the most tragic way what I have been stressing all those months. That [PM Alexis] Tsipras, [Defense Minister Panos] Kammenos and [Foreign Minister Nikos] Kotzias wanted to present their extremely damaging agreement – which satisfied what Skopje had been demanding for years and had been rejected by all previous governments – as a success for Greece,” the New Democracy leader said in a statement.

“I reiterate my commitment: New Democracy is not going to ratify this agreement,” he said.

The full Wikileaks cable file can be seen here: https://wikileaks.org/plusd/cables/08SKOPJE491_a.html