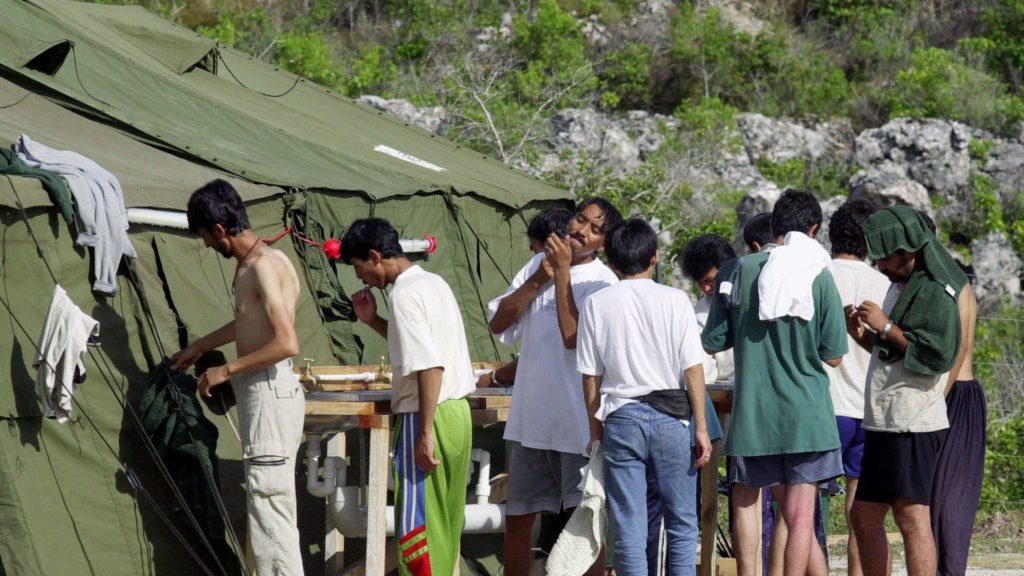 In this Sept. 21, 2001, file photo, Men shave, brush their teeth and prepare for the day at a refugee camp on the Island of Nauru. Photo: AAP via AP Photo/Rick Rycroft

Future gemerations will damn the present for its atrocities, as we damn and indict the past for theirs. The offshore custodial predicaments that have degenerated to indefinite immigration detention will cast a dark pall of grimness and aspersions into the generations of our grandchildren.

As a trauma recovery and suicide prevention researcher and as someone who has supported families who have been resettled as refugees after years in immigration detention, I have been close up to the psychological and psychosocial impacts of compounding traumas, witness to cognitive and dialectic narrowing and other damage from cumulative composite and aggressive traumas of which, for some, are near irreparable.

The Australian nation is increasingly availed to the corral of deprivations, miseries and sufferings that are its immigration detention crudely syphoned off to Nauru and Manus. The rudderless, brutal spectacle is at least forever in the public eye. There are the harrowing tragic unnatural deaths — half and quarter lives, suicides, attempted suicides, the hunger striking, children less than half normal body weight.

The unjustifiable languishing of people who once hoped for a persecution-free life, who rode dangerous high seas in crowded unseaworthy boats on average for three weeks has been abominably greeted with years in detention. The Australia in which we should be living is one that should be welcoming asylum seekers, resettling humanity and not railing against it.

There are more suicides outside of detention than within it, evidencing irreparable damage to people who had been incarcerated for unjustifiable periods. I visit the insides of prisons and support people pre and post-release and, in my view, in general people come out of the prison experience in a worse state than when they went in. In my experience, conditions in immigration detention are worse than Australian prisons.

People who have suffered long stretches in immigration detention are at elevated risk to anxiety, depression, agoraphobia and suicidal ideation.

I remember a young man who, after six years in immigration detention, took his life nine months after having been released. It is evident that former refugees who have come through the Kafkaesque immigration detention system are among the nation’s most vulnerable to suicide.

Monash University’s Australian Border Deaths Database recorded seven suicides of former refugees and asylum seekers outside of immigration detention facilities from March 2015 to September 2016. In two-and-a-half years to September 2016, there were 12 suicides. For every suicide, be assured there are at least 20 attempted suicides, scores of people chronically seriously depressed. For so many to die by suicide relatively soon after release from immigration detention describes a constancy of traumas and irreparable damage.

Each of these suicides of resettled former refugees should have stirred the nation.

In September 2016, 26-year-old Saeed Hassanloo, nine months after being released after six years in immigration detention took his life in Hobart. In the last days of February 2015, Saeed began a hunger strike at Yongah Hill Detention Centre in Northam, Western Australia. For 35 days the Department of Immigration sickeningly kept his hunger strike a secret, isolating him at Yongah Hill.

At the 35th day of his hunger striking, Saeed was admitted to Royal Perth Hospital. Some of Perth’s humanity gathered every night outside the hospital with candlelight vigils. Flowers filled his room. Saeed’s will to live was galvanised by the concern and love by so many, that many Australians truly do care and that our Governments are not reflective of the demography of this nation. On the 44th day of attempting suicide by starvation, Saeed consumed fluids.

In the preceding days, I had contacted the office of the Immigration Minister, Peter Dutton. A staffer told me that Saeed Hassanloo had passed away. Australia’s first hunger strike death.
I soon realised the staffer had assumed he’d died when he hadn’t. Reprehensibly, the Office of Immigration had consigned themselves to the death by starvation of Saeed Hassanloo. The Office had prepared a media statement on what they believed would be the inevitability of Saeed’s passing. The staffer I talked to during his morning brief had skimmed through the death statement and assumed Saeed’s death.

What sort of leadership is this? They were prepared to let a young man die in an Australian hospital.

Minister Dutton almost became Prime Minister, failing by only 13 votes. Is this who the Australian nation would want as their Prime Minister?

Saeed was returned to Yongah Hill and, months later, we succeeded with his refugee status — more than six years after his arrival at Christmas Island at 19 years of age. However, trauma haunted him until he took his life. The levels of self-harming and breakdowns in immigration detention should have long ago galvanised alternatives to detention.

What sort of Australia allows for children to be detained for years, for a 12-year-old boy hunger striking on Nauru, emaciated by starvation to 36 kilograms?

The mental deterioration of this child is a political and moral abomination.

That 119 children who remain on Nauru is a damning of the Australian nation. Children as young as nine and ten have attempted suicide, attempted self-immolation.

THE HISTORY OF MANDATORY DETENTION

In the late 1970s and early 1980s, moral leadership was demonstrated by the Government in assisting Cambodian and Vietnamese refugees who came in what appeared waves of boats.
My sister-in-law, just a baby, came from Vietnam in one of those boats, which nearly sank.

Children who arrived from these countries without the English language and without possessions came to my school. I became friends with some of them. One of them, a landmine victim, profoundly dragged his right leg. During this period, Andrew Peacock led the way, telling his Government he would resign if people fleeing Pol Pot’s Khmer Rouge killing fields were not assisted.

Mandatory detention, though not originally intended as indefinite, was enacted as legislation by Gerry Hand and Paul Keating in 1992.

The 1980s did not welcome the asylum seekers, but strong leadership stood taller. This ensured that asylum seekers and refugees did not receive the unwelcoming and ugly receptions of the last near two decades.

There were forms of offshore processing, or rather regional collaboration, at Galang camp in Indonesia and at Hei Ling Chau camp in Hong Kong.

These were places with horrific conditions where people died. However, there was UNHCR personnel at the camps to assist with resettlement.

Galang Island refugee camp opened in 1979 and was closed in 1996 after all the refugees were resettled. It had two camps; one for newly arrived refugees and another one for those approved, who received English classes and cultural information about the country of their resettlement.

In those 17 years, 400,000 asylum seekers were resettled. Australia quietly agreed to 40,000 but in the end accepted 70,000. Refugees at Galang preferred Australia. This was because Australia had shorter waiting periods, less bureaucratic red tape and faster processing.

Babies were born in Galang and people died there. Alongside the UNHCR, Doctors Without Borders and Save the Children maintained a near-daily presence.

Hong Kong’s little rocky island of Hei Ling Chau maintained a closed camp with razor wire. Many of the refugees broke down, many died. However, Hong Kong refused to push boats of refugees back out to sea, as on occasion the Thais did.

White-knuckled racism today grips the Australian landscape tighter than at any time in the last half-century.

Inhumanity towards refugees has never been more palpable.

The Australian Government could have closed Nauru and Manus and freed the refugees to New Zealand.

When a 12-year-old child hunger strikes, this bespeaks of the bleak, of no beacon of light, of hopes extinguished.

*Gerry Georgatos is the national coordinator of the National Indigenous Critical Response Service and the National Migrant Youth Support Service. He also works with the Institute of Social Justice and Human Rights. You can follow Gerry on Twitter @GerryGeorgatos. This article was first publised in The Stringer.