Greek mythology made trendy with a dash of humour The Charioteer of Delphi staring at … a smart phone! Photos: Damianos Kartas

Could you imagine the Minotaur as an angry cook, Cyclops driving a cab with his single eye on the road, while holding a frappe in his hand or the Lernaean Hydra keeping some of her heads busy at the beach, swimming and playing tavli? You might wonder if this is a joke. Well, the answer is yes and no.

This is only a small sample of cartoon sketches imprinted on the products of souvenir brand The Greek Imp. And while humour lies at the core of every creation, the team behind it is serious about promoting an image of contemporary Greece which pays tribute to its ancient past, while not being afraid to add a thoughtful sarcastic commentary on it.

“People visiting our country are familiar with ancient Greek art and mythology, so I used these as a basis to showcase the creativity of modern day Greeks […] I thought that mythical monsters were suitable material for sketches with a funny twist,” The Greek Imp’s founder, Effie Gavrilou tells Neos Kosmos.

Paradoxically enough, the idea to create a series of amusing Greek memorabilia was born during her trip to Peru, where she was impressed by a company’s merchandise adopting this approach.

The idea that these souvenirs could turn into a ticket for entering the world of business did not cross her mind until five years later.

“The Greek Imp was born in January 2013, driven by my desire to see souvenirs with strong humour references in the Greek market.
“I felt the need to be part of a force for humour around me. Moving away from the feeling of immobilising awe towards the imagination and skills of ancient Greeks, I thought of transforming this sense of responsibility into a celebration of creativity. And I believe I have managed to get close to my target,” she says. 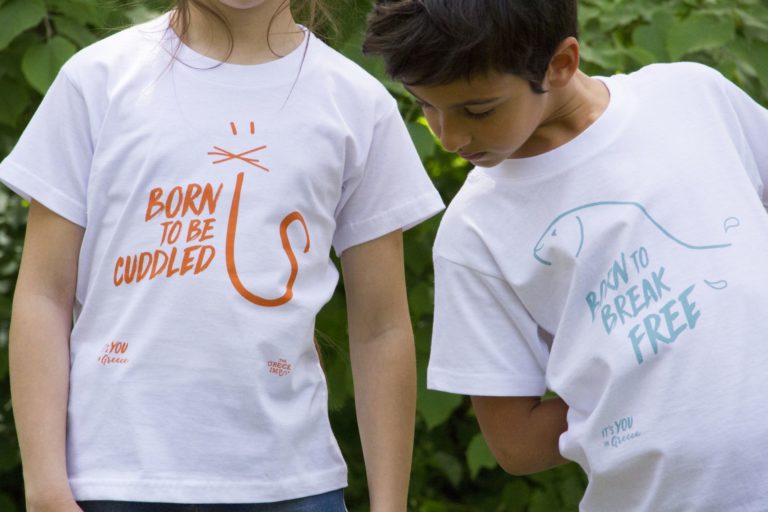 The brand’s logo was co-designed by an Athens-based communication agency led by Rena Chrysikopoulou and Michael Ochs and soon after the sketches of three well-known cartoonists, Spyros Derveniotis, Stefanos Koltsidopoulos and Nestoras Kechagias brought to life the first collection of “reinvented” mythical monsters cheekily appearing on t-shirts.

Since last year, the project has become complete with the introduction of a full product range, including fridge magnets, post cards, tote bags and stoles, and the launch of three new collections, while the team of creatives welcomed visual artist and illustrator Liliana Areteou as their newest member on board.

The ‘Eternal beauty’ series presents a rather surreal yet entertaining reality of how ancient Greek statue figures would look today. Take a closer look at the sketches imprinted on a seemingly mainstream souvenir and you’ll see the Charioteer of Delphi staring at his… smart phone, Antinous posing with… piercings and tattoos or a typical Cycladic marble figurine… smoking!

All jokes aside, each item comes with a small note telling the story of the figure or object depicted, in a bid to make ancient Greek history and culture accessible.

Before kick-starting her career as a business entrepreneur, Gavrilou was working as a script writer, a profession she still loves and practices whenever an opportunity arises. 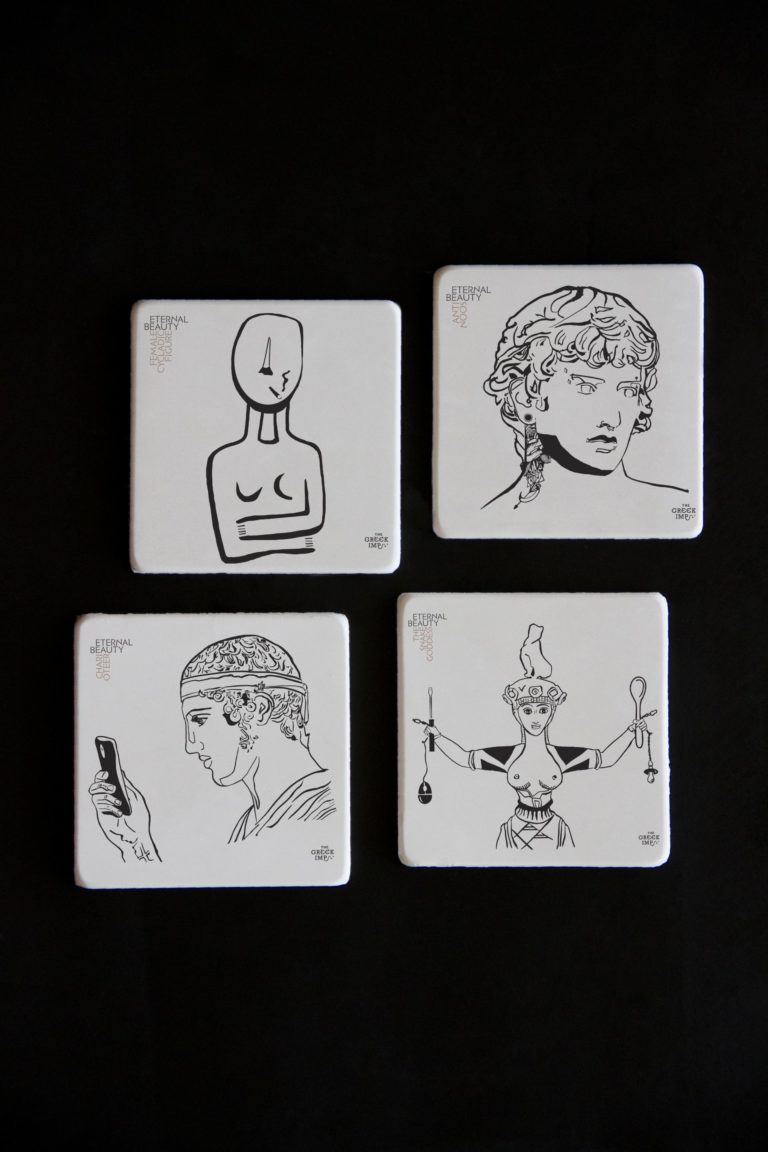 Her latest work is diverse, from a graphic novel raising awareness on neurodegenerative disorders to a theatrical comedy having recently premiered at renowned Bob Theatre Festival in Athens.

While her decision to establish The Greek Imp coincided with the onset of the economic crisis in the country, Gavrilou didn’t see this as an inhibiting force. Instead the greatest challenge, she says, was juggling motherhood and managing a new business.

“This is also why it took me four years to come up with new collections. And before I knew, I had three new collections, 15 brand new designs […] I see it as a sign of suppressed creativity,” she says, laughing, and concludes with a personal note which could however inspire any professional taking a leap into the unknown:
“I don’t have prior business experience to compare with, meaning before as opposed to during the economic crisis.
“The one thing I know for sure though is that when you make a decision, you just work until you accomplish your dream.
“There will always be obstacles, but you can find a way to overcome them or change your direction […]
“I remember a phone call with a cousin of mine – who is a businessman – when I first started. He was trying for about an hour to discourage me from moving forward with the project telling me to wait and see how the crisis would unfold. To be honest he got me stressed but nevertheless I moved on.
“It’s good to have an opposing voice balancing enthusiasm, but at the end of the day, it is up to us to choose our next steps.”