Malta and the Marbles The crates were heavy, too heavy thought Captain William Eglen as he watched his crew curse and sweat, manhandling 17 large timber boxes onto the boat. There was already too much in the hold – Egyptian statues, amphorae from Rhodes, an ancient seat hewn in marble, hundreds of fossils and coins from the furthest shores of the Mediterranean – cannonballs and guns, and goodness knows what. Words had been spoken with the well-tailored gent who was accompanying the shipment, but William Hamilton, Lord Elgin’s superintendent and the organiser of the voyage, was in no mood to debate, all the crates must go on.

Under the Scottish captain’s watch were 11 crew and six passengers. His ship, the Mentor, would steer first south west, round the southern tip of the Peloponnese, then to Malta. London awaited, a world away from the heat and dust of Athens.

With fair weather and a lively breeze, the Mentor made good time to Cape Matapan.

But as the brig approached the southernmost point of the Greek mainland all was not well – the wind turned easterly and the Mentor had to seek shelter overnight. On the second morning, tacking to make progress, the ship was driven south as the swells grew. Meanwhile a more worrying problem: the bow had begun to take on water. Eglen spurred on the crew to keep the level down, but as the wind howled and the ship tossed, there was only one thought in the seafarer’s mind: make for the closest land – Kythira.

By early afternoon they had almost reached the port of Avlemono on the island’s south coast. Unable to go alongside the harbour because of the swell, Eglen desperately cast two anchors; neither held. Having severed their chains, the crew hoist sail to avoid the looming rocks, but the ship was lost, dashed on the jagged coast. As the waves crashed above, the Mentor with its precious cargo sank slowly and silently to the sea bed.

So the story begins, of how many of the sculptures hacked off by Lord Elgin from the Parthenon Temple began their journey to England. Hearing of the disaster, Elgin immediately began organising a salvage mission. It was a monumental effort and took two years, involving the residents of Kythera, as well as the recruitment of sponge divers from Kalymnos and Symi to bring the crates to the surface.

Corresponding with the authorities on Kythera, Elgin described the Mentor’s cargo as “…boxes of stones with no value, but of great consequence for me to secure”.

Secure them he did, but once recovered, the further obstacles that were needed to deliver the consignment to England, gives an insight into the 19th century politics of the Mediterranean – how ‘Rule Britania’ – enforced by Britain’s influence in Malta – ensured a potent pipeline for pilfered antiquities from the Greece, Turkey, and the eastern Mediterranean.

For this was the route that transferred to British collectors and institutions the priceless cultural wealth of southern Europe and the Levant, for the entire 19th century and beyond.

The eventual transfer of the Mentor’s cargo from Kythera to London reveals much about Mediterranean maritime power at the time. While Malta only became technically a British colony in 1815, Britain’s control of the island after its occupation by France began in 1800.

And it would be against this backdrop that the artefacts taken from the Parthenon would make their slow progress north, undertaken during the Napoleonic Wars (1804-1815) between France, and Britain and its allies.

With the sculptures recovered on Kythera, Elgin, as Britain’s former ambassador to the Ottoman empire, turned – through his trusty superintendent William Hamilton – to the British authorities on Malta for help, requesting a ship to collect the cargo. Hamilton appealed to the de facto British governor of Malta, Sir Alexander Ball, who went in turn to the Royal Navy and no other Vice Admiral Lord Nelson for help.

In a letter dated September 2, 1804, one year before he was killed at the Battle of Trafalgar, the British admiral authorised two ships to sail to Kythera to pick up the sculptures. By 4 October 1804, all the pieces had been retrieved. They arrived in Malta in February 1805. And there they sat in a Valletta warehouse, their journey once more interrupted by the maritime dangers that Britain faced from the French. Meanwhile Elgin fumed.

On his behalf, William Hamilton turned once more to Alexander Ball to find a way to finally prise the sculptures from the southern Mediterranean. His letter, written in the style of the British aristocracy, speaks volumes about the nature of the relationship. “Lord Elgin will be relieved from all his anxieties…” wrote Hamilton, before encouraging Ball to help realise “the very important object, which we hope is so near to completion.”

Hamilton writes of Elgin’s “confidence in the continuation of your friendly office”, and that in bringing the Marbles to Britain, “[Lord Elgin] will have secured the grateful memory of Britons to come.”

Before receiving the last of the Parthenon sculptures via the ‘Malta pipeline’, Elgin began negotiations with the British government for their sale.

The hard-up Elgin had hoped to raise £73,000, but agreed to accept £35,000 – the value determined by the House of Commons. It was no small sum – one pound in the early 1800s was worth £100 pounds today. In 1816 the collection was given to the trustees of the British Museum in perpetuity. Two centuries on, how much longer they remain in their hands is the question. Sir Alexander Ball, Civic Commissioner of Malta, established Britain's control of the island between 1800 and 1809. Malta played a critical role in transporting looted antiquities from Greece and the eastern Mediterranean to the UK. Thomas Bruce, 7th Earl of Elgin. Elgin sold the Parthenon sculptures to the British government for 35,000 pounds – a sum that would be worth around 350,000 pounds today. 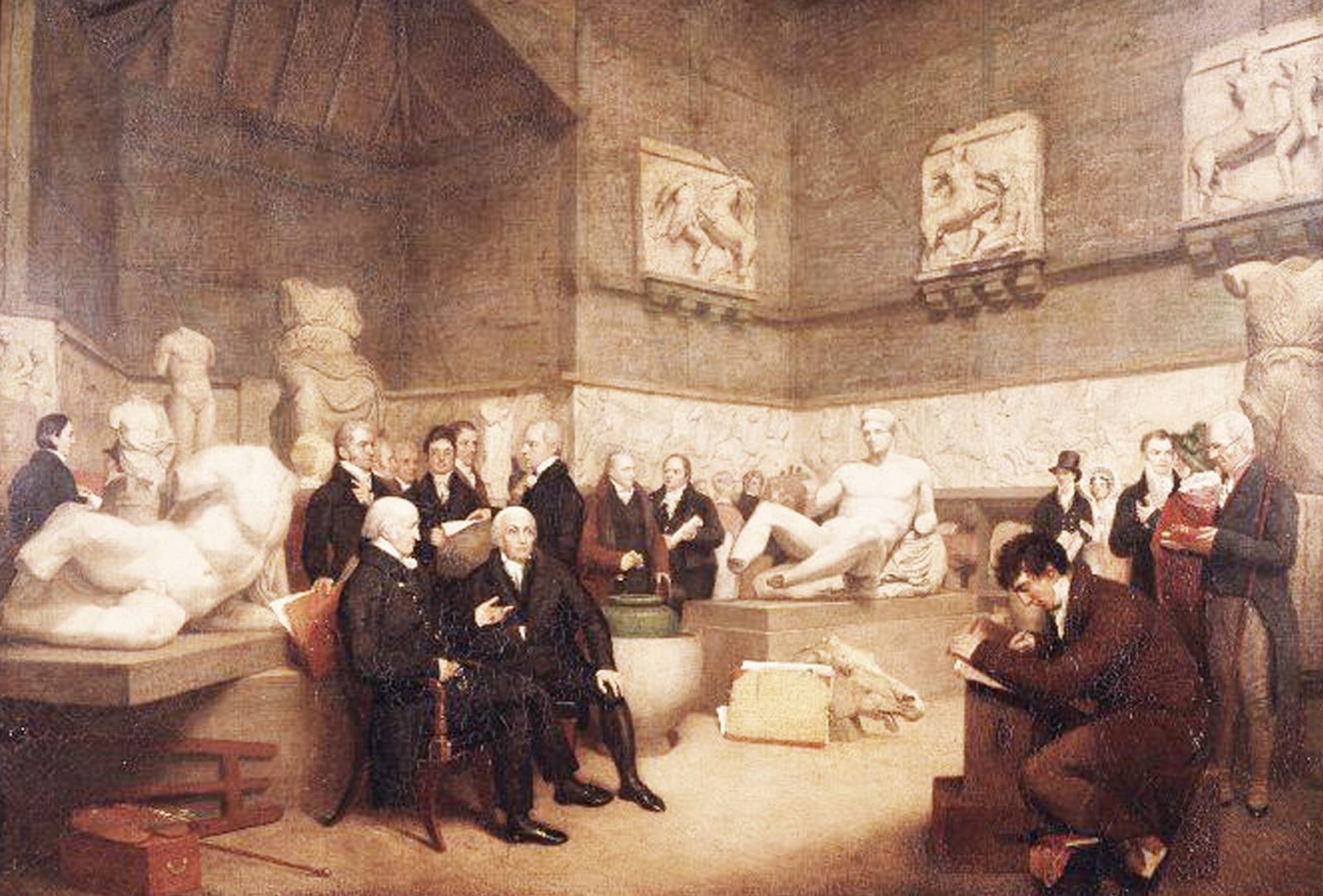 The temporary 'Elgin Room' at the British Museum in 1819, painted by Archibald Archer, showing trustees and staff. Photo: British Museum

The Marbles and Brexit
The Greek government today is in a strong position to demand the Marbles’ return. Will 2019 be the year that finally sees them reunited with their homeland? Well, there’s never been a better chance.

Given the UK government’s desperation for a deal with the EU on Brexit terms – terms that Greece as an EU member state must ratify – for once, Athens has a potent bargaining chip. Hardly surprising that as the first breezes of autumn were felt across the Aegean, Greek culture minister Lydia Koniordou invited UK officials to meet in Athens to discuss the sculptures’ return. As the clock ticks down to Brexit in March next year, the British PM Theresa May has never been in more need of European friends.

If the political storm over Brexit worsens in the UK’s internal politics, and a general election is called, waiting in the wings is the Labour Party and its controversial leftist leader Jeremy Corbyn.

Corbyn has vowed to strip the British Museum of the sculptures. Speaking in June this year he said:
“As with anything stolen or taken from occupied or colonial possession – including artefacts looted from other countries in the past – we should be engaged in constructive talks with the Greek government about returning the sculptures”.

The UK government’s position has consistently been that ownership of the sculptures is a matter solely for the trustees of the British Museum, but the winds are changing. As Britain struggles to cement an agreement with the European Union, there has never been a better time for Greece to exert its influence over ‘Rule Britannia.’