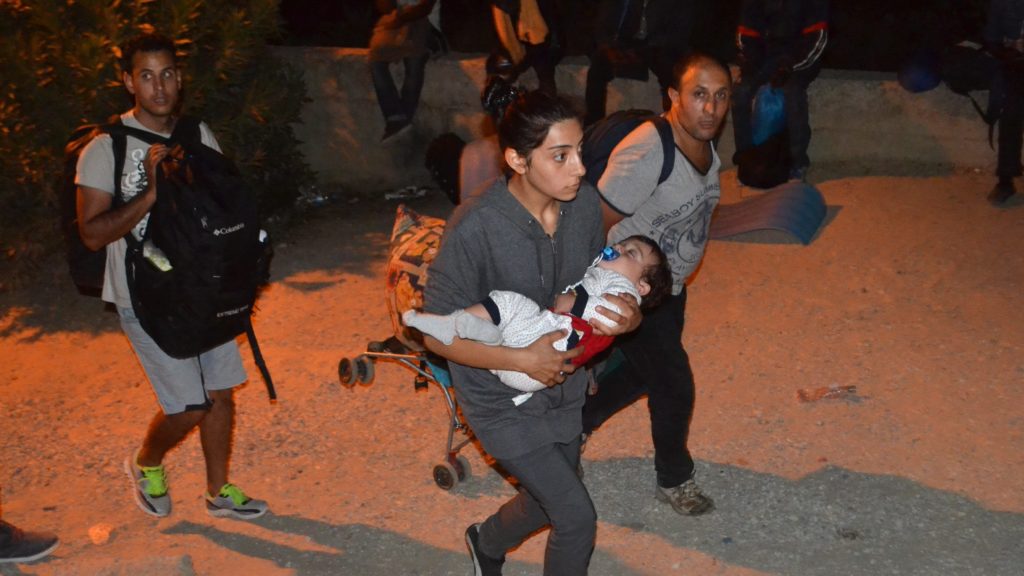 Migrants flee from the camp of Moria on Lesvos island. Photo: Archive AAP via EPA/STRATIS BALASKAS

Moria camp, in Lesvos is currently home to 9,000 asylum seekers when it only has capacity to hold 3,000. Three thousand is approximately the number of minors that live in the Moria camp, which Médecins Sans Frontières (MSF) called “a giant open-air mental asylum” back in August referring to the overcrowding and dire sanitary conditions.

According to MSF and UN reports, asylum seekers live in groups of up to 30 people, crammed into tents designated for four or living in metal containers between rubbish and excrement. Each day individuals from various ethnic groups wait over four hours in line for a meal, a situation that often results into brawls.

Aid groups have been reporting gang rapes of women attacked inside the camp’s toilets while physicians and psychologists have repeatedly reported that minors are constantly sexual targets.

Earlier this week, the administration of the Moria migrant and refugee camp on Lesvos refuted the statement of an MSF representative published in the media saying that since January MSF had treated 23 victims of sexual abuse at the facility, including nine minors. The Moria camp administration labelled the claims false.

In response MSF issue another statement on Wednesday saying that the medical NGO is “intensely worried by the fact that incidents of sexual abuse and rape that took place in Moria on Lesvos are disregarded and labeled untrue by the administration itself”.

The statement added that “MSF informed the police of all the incidents involving minors and that it is the responsibility of law enforcement authorities to investigate the claims”.

“Our teams see incidents of sexual violence and abuse, suicide attempts, self-harm and serious mental health effects on children, teenagers and adults every day. And this is a fact that cannot be denied by anyone,” MSF concluded.

Meanwhile, according to the New York based International Rescue Committee “approximately 84 people share a single shower, and 72 people share a toilet. The sewage system is so strained that raw sewage has been known to reach the mattresses where children sleep” – conditions that only exacerbate the trauma and memories of war and death.

“Although the vast majority of migrants who arrive in Moria are traumatised, after having fled from violent conflicts in their home countries, conditions in the camp have exacerbated their trauma,” said Luca Fontana, field coordinator of MSF on the island.

“After two years, some are still awaiting transferral, even if they know they could be deported to Turkey at a moment’s notice. I’ve worked in camps infested with Ebola in Sierra Leone and Guinea, but I guarantee you that this is the worst situation I’ve ever seen,” Fontana stressed while referring to records of minors attempting suicide at the camp.