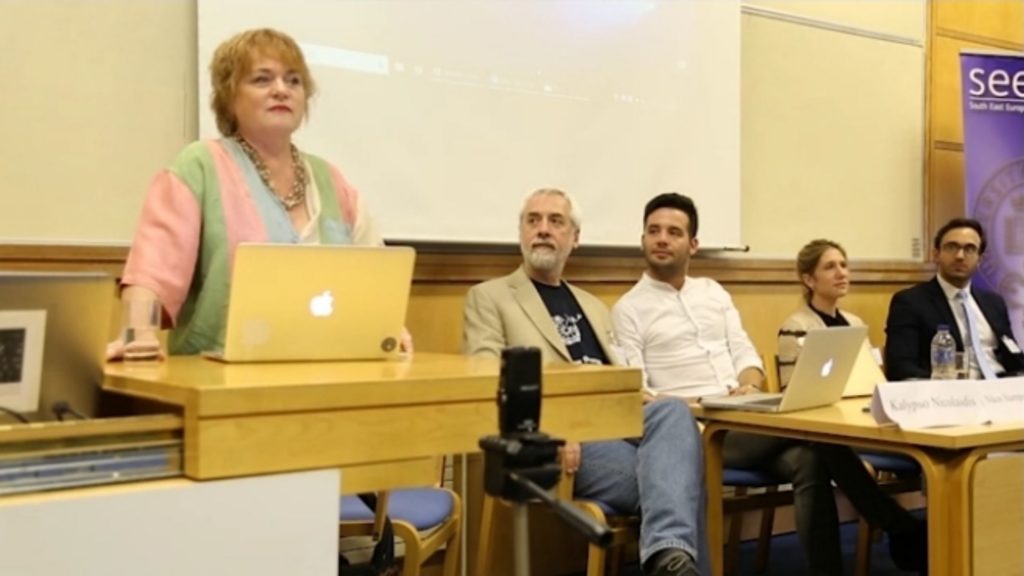 Kalypso Aude Nicolaïdis, Professor of International Relations and Director of the Center for International Studies at Oxford University, speaking at the SEESOX conference event ‘Session 9 – Diaspora initiatives: What is to be done?’

The South East European Studies (SEESOX) research centre at Oxford University launched a new website, SEESOX Diaspora, which explores the relationship between Greece and its diaspora in the context of economic crisis and beyond.

SEESOX focuses on the interdisciplinary study of the relationship between European integration and the politics, economics and societies in the Balkans, Greece, Turkey and Cyprus.

The centre conducts policy-relevant research on the multifaceted transformations of the region in the 21st century, following closely on conflict and post-conflict situations; SEESOX then analyses the historical and intellectual influences which have shaped perceptions and actions in the region.

The new website investigates how Greek diaspora can affect Greece’s political and economic transformation and explores ways for the Greek state to interact with its diaspora on a socioeconomic level.

The main research projects of SEESOX Diaspora are Philanthropy, Greek Diaspora and Politics, Greeks in the UK, New Greek Migration, and Comparative Research.

SEESOX Diaspora is designed to reach wide audiences interested in education and policy; aiming to become the prominent forum for debate between the wider diaspora and dedicated scholarship programs.

Another goal is to connect Greece and its diaspora to countries which can serve as benchmarks by establishing diaspora-homeland interactions; such countries include Israel, Ireland and Poland.

SEESOX aspires to become a point of reference for anyone interested in the contemporary aspects of the Greek diaspora, archives, activities, institutional affiliations, policy relevant research; to analyse the new trends and to assess the impact of the diaspora on the development of the Greek economy identifying policies that can maximise its contribution.

Among the projects launched by SEESOX Diaspora is the creation of a Greek Diaspora Digital map, a dynamic tool that records and depicts the presence of Greek diasporic organisations worldwide, providing a platform for communication and interaction between Hellenes on a global level.

SEESOX is also organising a large survey focusing on the Greek Diaspora in the UK; the first major attempt to assess and analyse the profile of the Greek communities in the UK which have been highly diversified with the post 2010 crisis-driven emigration wave from Greece.

On 22-23 June, it held a conference titled ‘Homeland-Diaspora relations in flux: Greece and Greeks abroad at times of crisis’ at St Antony’s College which explored the impact of Greek diaspora communities on their homeland through interactions in the domains of economy, politics, and philanthropy.

During the first part, the SEESOX team presented some of the output of a study by in-house researchers Othon Anastasakis and Foteini Kalantzi who examined Greek parliamentary debates on diaspora during 2009-2017, by focusing on issues such as the diaspora vote, Greek state-sponsored language education, as well as diaspora aid and investment. The second session touched on diasporic identities, where Giorgos Anagnostou from Ohio State University pointed out the existence of two Greek American narratives: the bootstrap narrative whereby individual achievements bear no connection to collective endeavour and the narrative relating to the Greek American’s community aligning with other actors to help achieve goals of collective significance.

In conclusion, the conference provided numerous insights on the state of Greek diaspora-homeland relations offering participants the opportunity to acquaint themselves with different perspectives and timely research that has originated from some of the most important Greek diaspora scholar communities. It also created a strong network for cooperation and synergies in the future.