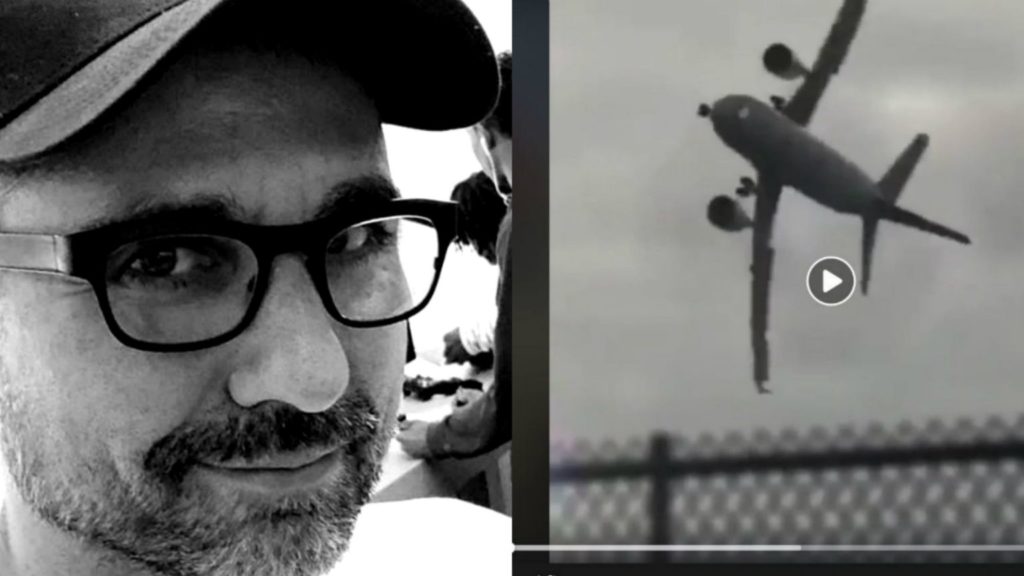 (L) Aristomenis Tsirbas, and a still from the fake news video showing the director’s computer-generated clip of a plane performing a 360 degree flip. The fictional clip was followed by footage from a real news report on an emergency landing incident. Photo: Facebook

Surely, the fake news ‘tsunami’ amidst the 2016 US presidential election has made us more alert than ever to how easily misinformation and lies can go viral.

But understanding that one is not immune to being fed ‘fake news’ is a totally different thing to realising how easy it is to unknowingly become part of the problem.

At least this was the case for Greek Canadian Aristomenis Tsirbas, who saw his computer-generated (CG) video reproduced in a fake report.

The video, created by the Los Angeles-based director about a year ago and then uploaded to YouTube, depicts a plane performing a 360 degree flip close to an airfield. It is one of the many fictional yet realistic-looking clips Tsirbas produces to showcase the potential of CG technology as well as earn some income from YouTube ads. The artist’s computer graphics expertise has secured him work for projects the likes of Titanic and Star Trek. But last month he became the protagonist in a not so reputable “show”.

His crazy plane clip was reproduced in a fake news video reporting the emergency landing of a fictional plane in Shenzen, China on 28 August due to mechanical failure. The second part of the video, joined with Tsirbas’ CG clip and showing passengers safely evacuating an aircraft is taken from real news footage, unrelated to the fictional incident.

The fake news report was first posted on 13 September on a Facebook page titled ‘Time News International’ and managed to reach 14 million viewers around the world. One of them was a Washington Post technology columnist, Geoffrey Fowler who decided to shed light on the source of the hoax.

His investigation led him to the creator of the CG plane video, Aristomenis Tsirbas.

“I realised, oh, my God, I’m part of the problem,” Tsirbas told Fowler, explaining that he sees this kind of work as “pranks or satire”.

“They are clearly fakes,” he added.

But recent history has shown the boundaries between satire, real news and misinformation can be a grey area and with today’s photo and video manipulating software, telling the real from fake is by no means a given.

Following their conversation, Fowler reports that Tsirbas contacted him again to say he would start adding a disclaimer to his CG videos: “This is a narrative work”.

Despite repeated efforts, the Washington Post journalist was unable to reach the administrators of the Facebook page Time News International, where the fake news report first appeared, for comment. But he managed to speak to Tessa Lyons, the product manager for Facebook’s News Feed involved in combating misinformation.

According to Lyons, the motive behind Facebook pages posting false or inaccurate information is usually economic, redirecting users to sites filled with ads or even spyware.

Meanwhile, Fowler cites a recent study conducted by the University of Stanford suggesting a 50 per cent decrease on “Facebook user interaction with known fake news sites” since the US presidential election scandal, partly due to increased efforts by the social media giant for a crackdown on misinformation. Yet, the author cautions we still have a long way to go in the fight with fake news.

After all, despite Facebook’s relatively quick response to detect the fake plane video a few days after it was first posted, it still appears on News Feeds, albeit less often.