Konstantinos Katsifas, who was shot to death by the Albanian Police on Sunday, in an incident that has divided public opinion in Greece and Albania. 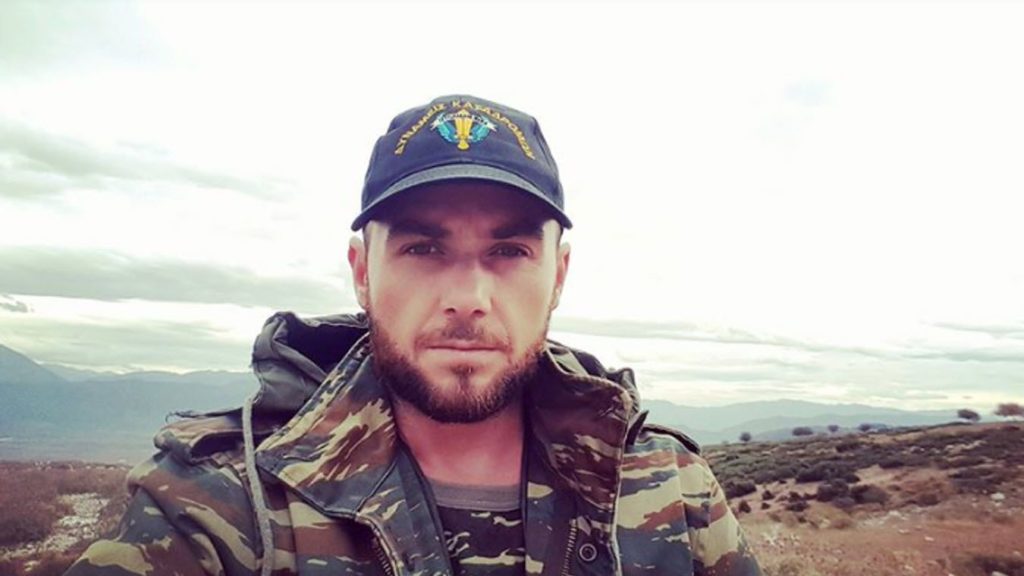 I don’t think we will ever know the exact sequence of events that led to the recent shooting death of Konstantinos Katsifas in Northern Epirus. The official version is that this man, a native of the Greek villages of Albania who migrated to Greece and became a Greek citizen, returned to his village to take part in the annual OXI Day celebrations. Prior to doing so, he boasted on Facebook about the necessity of “taking back” Northern Epirus, which has been part of Albania since 1918. Apparently, he protested at the Albanian police lowering the Greek flag, (though the Albanians deny this and the fact that the Greek flag was flying next to the Albanian on that day and that the Greek Minister of Culture was present to participate in the commemorative event, seems to raise questions about the veracity of any flag provocation) and fired a Kalashnikov at them. Why he would fire a gun at them is unclear. Some members of the Greek minority claim he merely fired in the air. Others claim he had no gun at all, though video evidence seems to refute this. It is unclear, why the Albanian police would want to pursue and ultimately kill someone who had no gun and posed no threat.

Eventually, Konstantinos Katsifas, who fled from the scene, was shot in the head and the heart. Paradoxically, the Albanian police, prior to his death, sent images to the media suggesting he had been arrested.

It only later emerged that he was shot, for resisting arrest while armed.

Konstantinos Katsifas apparently has a criminal record. He was, according to sources convicted of drug trafficking in Athens in 2009. At the time of writing, he now lies at the morgue in Argyrokastro, his family refusing to take custody of the body until an independent post-mortem takes place.

How one feels about Konstantinos Katsifas depends on which side of the Greek political and ideological divide one stands on. To the right and the hyperpatriots, he is a hero, a man who died defending the Greek flag, a living, or rather, dead symbol of the trials and tribulations of the Greeks of Northern Epirus.

They, of course, vehemently deny that he pulled a gun on police, and even if he did, according to one antipodean right wing activist: “guess what… I don’t care what the Albanians think… one of our boys is dead… they have blood on their hands so they can all go to hell.”

Katsifas’ death, according to them, exposes the bankruptcy of the leftist Greek government which lacks the power or the inclination to put the Albanians (and all other pesky neighbours) in their place, simply because the Greek government is full of traitors who act against the national interest, as defined by the right. If everyone followed “brave” Katsifas’ example, all of Greece’s wrongs would soon right themselves (if one pardons the pun).

To the left, Konstantinos Katsifas is a right-wing extremist, typical of his ilk. His fate is the logical conclusion of the activities of all racists, fascists and supremacists. Bearing arms against Albanian police officers is unacceptable (unless one happens to live in Exarchia, or is fighting one’s own local police force) and in a way, the man courted the fate he ultimately met. Nationalism causes violence, which leads to death.

It is for this very reason that irredentism is dangerous. Borders are political constructs and we should learn to live without them in a spirit of brotherhood and harmony.

Of course, a range of views exists as to who was “behind” Katsifas, ranging from the Greek police, extremist cells in the Greek army, or extremist political parties such as Golden Dawn.

As such, Konstantinos Katsifas’ death has merely served as fuel and fodder for the great ideological schism tearing its way through Modern Greek society in Greece and abroad. We either idolise the man as a hero and justify the unjustifiable, or we deride him and his followers, holding him up for execration. According to this paradigm of polarization, there is no room for rational analysis of the context and background upon which this hapless individual was killed.

That context is important because it is now, as it was during the Cold War period, providing a distorted view of the condition of the Greeks living in Albania.

According to Katsifas and many on the right who thought as he did, the native Greek population of Albania is numerous, down-trodden, continuously persecuted but is strong, vibrant and is awaiting a liberator in order to annex the region to Greece. Many of these argue that successive traitorous Greek governments, infected and pervaded by left wing ideologues or bought off by higher interests, refuse to take the necessary step to claim the land for Greece.

According to many on the left, there is no persecution at all, and, adopting the ideology of official Albanian propaganda, the few “Greeks” of the region that identify as such, are not really Greek, they are merely confused and are victims of a century of hypernationalistic right wing propaganda. According to them, the movement of peoples in the Balkans defies national stereotyping, therefore issues of identity are merely the constructs of an undeveloped mind and the problem is thus, not so much with the dead Katsifas and his violence but with the existence of people in the region who claim they are Greek, when they should not.

Of course, both views range from the exaggerated, to the bizarre. There is of coursed a sizeable Greek minority in Northern Epirus. Even allowing for the movement of peoples, Greek speaking people have been living in the region since ancient times, something attested to by archaeology. Some villages, especially in the Dropoli region, a region which is officially designated as a Greek minority zone by the Albanian government, are ethnically homogenous. Others, have mixed populations and in areas like Himara, along the coast, the Albanian government officially denies the existence of a Greek minority, even though three of its seven villages are predominantly Greek speaking. In areas such as Korytsa, which have historically been Vlach speaking, the ethnic and cultural affiliations of the inhabitants are being constantly renegotiated. The land is complex and defies sweeping characterization.

THE POLITICS OF ALBANIAN NATIONALISM

Members of the Greek minority are represented in all mainstream Albanian political parties. There also exists a political party known as the Union for Human Rights, which is in effect a party largely based upon the support of the Greek minority, since by law, political parties cannot be constructed in Albania on ethnic lines. Its main role is to draw attention to acts of discrimination and racism experienced by ethnic minorities in Albania by the state and its organs. To argue that there is organized repression of the Greeks of Albania is thus misleading. But it cannot be doubted that the modern Albanian state finds the presence of persons identifying as Greek within its borders problematic and does not always deal with them in an equitable way.
This is because Albanian nationalism is a potent and extremely virulent force in domestic politics, allowing the electorate to focus not on corruption, a parlous economy and a dearth of public services but rather, on territorial expansion, and feelings of being hard-done by, since, according to what is being taught in official Albanian geography books, Albania should include all of Epirus and parts of Macedonia and the entire modern Greek state owes its existence to Albania and Albania’s greatest son, Alexander the Great.

When Albanians, especially those serving the state, are steeped in this ideology, they are bound to react when, in contrast to what they are being taught, they come across villages who want to raise the Greek flag and celebrate what Albanians consider to be not a fight against fascism, but rather an invasion of Albanian territory. Members of the Albanian security forces and municipal authorities have tried to obstruct Greek flag raising in the past. Coupled with that, the fact that in 1914, the Greeks of Northern Epirus fought a war with the Albanians in order to secure an autonomous status and one can see how the Greeks are portrayed as a disloyal, potential fifth column by cynical politicians to their constituents.

Prominent and outspoken members of the Greek minority are subject to harassment periodically, if they advocate for “rights”. In areas such as Himara which form the Albanian Riviera, there is a concerted effort to drive elderly people out of their homes and appropriate land in an illegal fashion, for sale to developers. Electoral fraud and intimidation in these regions is rife.

Even though Greeks and Albanians have lived side by side throughout the entire Balkans for centuries, their national narratives within the borders of modern Albania exclude one and other, and consequently, the absorption of those identifying as Greek into the broader national narrative seems to be impossible, possibly because they have only ever related to each other from a point of political/class ascendancy or servitude, something that extremists on all sides, gleefully exploit.

The shooting of Katsifas once more sends the message to the Albanian mainstream that those identifying as Greek are subversive and a threat to the state. This does not augur well for interethnic harmony in the region. It also leaves questions about the justification for the excessive use of force and whether or not Albanian special forces exercised best practice in apprehending an armed law breaker, unanswered.

Katsifas’ death is thus a tragedy, not because it exposes the cynicism of an Albanian police force already known to “construct” events in order to feed local prejudice (the stealing of ballot boxes during elections in Himara being a case in point) but because it achieved the opposite of what he purportedly wanted to do. Instead of raising awareness and sensitivity about the complex and ever changing ethno-linguistic demography of Northern Epirus, his death has reduced to a stereotype, one to be employed to feed the prejudices of a Greek polity constantly in search of more mud to sling at each other. And in that corrosive struggle, the day to day difficulties of the Greeks and Albanians that live in that impoverished region, being of no use to those who seek only to orientalise them, are ignored and effaced.