The celebrity activist tweeted her support for ‘Progressive International’, on top of comments criticising
the European crisis and ‘structural violence of the French – and global – elites’

Yanis Varoufakis has at least one supporter for the ‘Progressive International’, a global alliance he set in motion, through his ‘Democracy in Europe Movement 2025’ (DiEM25), in collaboration with the Independent US Senator Bernie Sanders. The initiative was announced in Rome in October, with aspirations to promote a “progressive, ecological, feminist, humanist, rational program” for not only Europe, but for the entire world as according to Mr Varoufakis the rise of right wing ideologies “that sprang out of the cesspool of financialised capitalism” needs to be counter-balanced.

“I’d like to learn more about The Progressive International which was just launched in Vermont by @Diem_25 and The Sanders Institute,” the model-actress-turned-activist tweeted on Wednesday, causing ripples of excitement over the leftist cohorts in both sides of the Atlantic. The Canadian-American star’s Progressive International tweet was followed by another, just linking to the alliance’s website. ‘Pinned’ on top of her twitter page, it is now the first thing her fans come across.

Anderson also expressed her wish to meet Senator Sanders, who has become a symbol of the social democracy in the US, after his failed bid for the US Presidency. Having the support of a grass-roots movement which has only grown stronger since Donald Trump’s ascend to the Presidency, Sanders is strongly urged to run again in 2020, given that poll analysts have said that he would have probably won in 2016, if he had the support of the Democrats.

However, there is another election sooner, that Anderson feels is more important.

“On my radar – The European elections ahead, which will be a major battleground for a clear vision – and hope – to be put forward by Progressives,” she tweeted.

Varoufakis’ DiEM25 will take part in the election, with candidates in many European countries. The Former Greek Minister of Finance himself is running in Germany, in a gesture widely symbolic of his anti-austerity stance. His movement should count on Anderson’s support, given that she now resides in France. 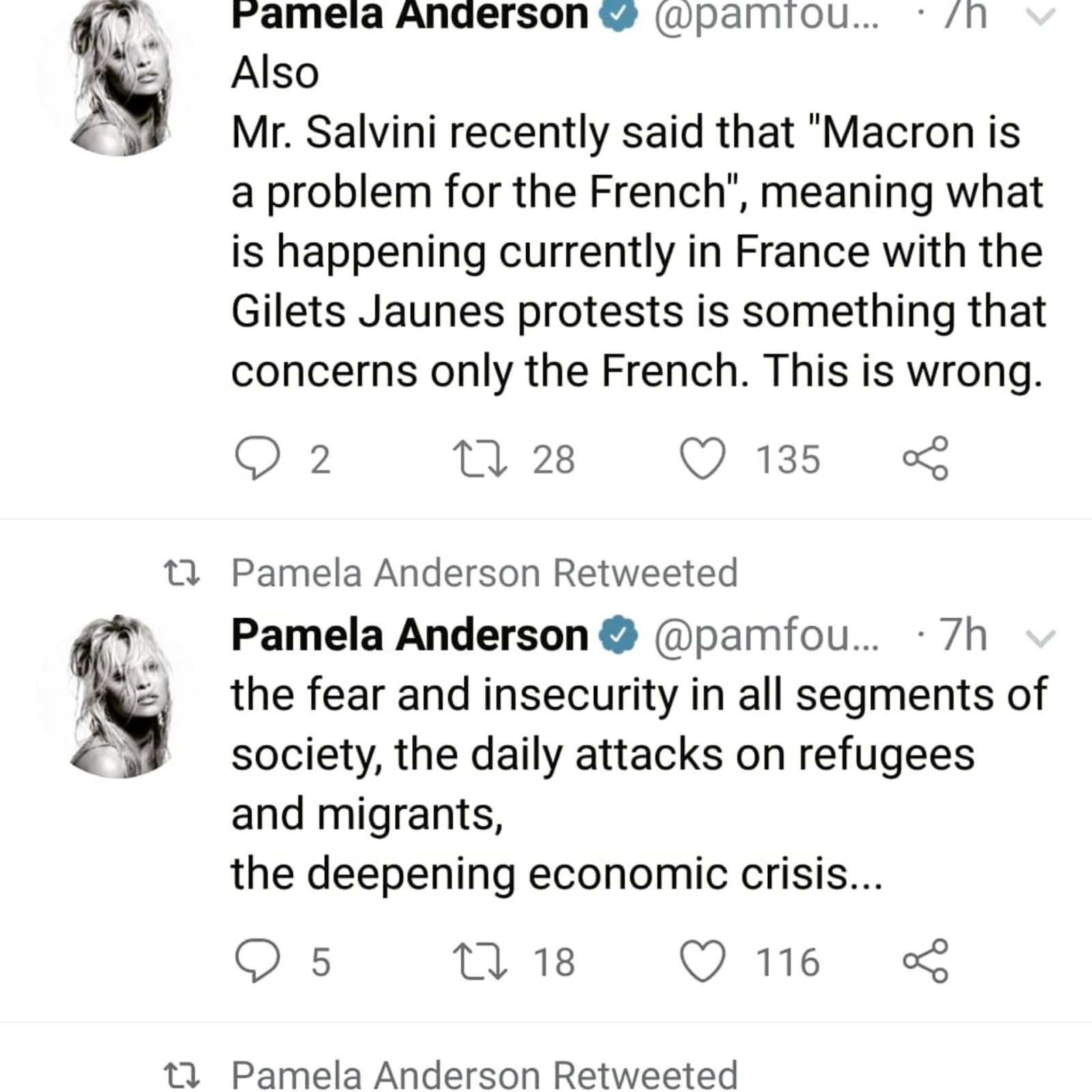 In fact, the former Baywatch star made news this week, with another thread of tweets, where she weighed in on the ‘Gilets Jaunes’ violent demonstrations that shook France. “I despise violence … but what is the violence of all these people and burned luxurious cars, compared to the structural violence of the French – and global – elites?” Anderson tweeted on Monday, following up with her insights on the political situation in France and Italy. “What is happening in France these days is a European problem, in the same way that the anti-immigrant measures and slide towards a new form of fascism in Italy is a European problem,” she tweeted. “The solution is not more Macron or more Salvini, they actually need each other and reinforce each other, the solution can only be a Pan-European awakening across borders and nationalities, which would be able to tackle the deep economic, social and ecological crisis of Europe today.”

All this might seem strange to anyone who has not caught up with the former Playmate’s longtime activism. For the past 20 years, she has been running the Pamela Anderson Foundation, a charity connecting resources to advocate for Human, Animal and Environmental Rights.

Earlier in November, she sent an open letter to Australia’s PM, Scott Morrison, following his reaction to her plea for Australia to take back whistle-blower Julian Assange, putting an end to his detention.

“You trivialised and laughed about the suffering of an Australian and his family. You followed it with smutty, unnecessary comments about a woman voicing her political opinion,” she wrote.

“Rather than making lewd suggestions about me, perhaps you should instead think about what you are going to say to millions of Australians when one of their own is marched in an orange jumpsuit to Guantanamo Bay — for publishing the truth. We all deserve better from our leaders, especially in the current environment.”