Unique traditional recipes to add to your festive table this Christmas

We've compiled a list of traditional, albeit less common, delicious recipes from different regions of Greece for you to try at home

It’s that time of year again! Christmas is just around the corner and if you haven’t put the scales away yet, you’d better do it before the end of this week.
The countdown to the end of the year has began and in spite of the high temperatures in Australia, Greeks are getting ready for massive caloric consumption over the next 15 days.
With the majority of Greeks being Christian Orthodox, many have been fasting for up to 40 days, before indulging themselves in the traditional flavours this season has to offer.
From the first kalanda (carols), the festive season officially begins on 6 December, St Nicholas day for the Greeks and typically lasts until the Epiphany of the Lord on 6 January and the blessing of the waters.
Christmas is a special time of year, as it unites family and friends, sometimes even enemies and it symbolises love and hope for new and better beginnings. While faith is officially the common denominator, in reality it is the copious amounts of food that brings people together.

Greek cuisine is famous for its scrumptious dishes, flavoured with the enticing aromas of herbs and spices and the Christmas holidays are no different.
The traditional Hellenic festive table honours almost religiously the likes of pork, veal, lamb, or goat meat as the main dish, with turkey and chicken having also entered the Advent feast in recent decades. Lamb and pork, however, have been part of the Greek table since ancient years and became a staple again after Christianity became a popular religion in the region, around 700 AD.
Most families would eat meat twice a year, slow cooked alongside fruits, nuts and braised in olive oil and honey. People would slaughter a goat or lamb in Christmas and Easter, inviting all relatives and neighbours to share the the food and rejoice. Meanwhile, in Northern Greece, stuffed cabbage leaves are called yiaprakia and are made with not fresh but toursi (brined) cabbage and ground pork, and are a traditional Christmas dish.

Another custom in many areas of Greece, a symbolism of the Holy Communion, is baking Christopsomo, also known as Christ’s bread, dipped in Krasomelo, the Greek version of mulled wine. While many argue this tradition is best fitting for Easter, for many first Christians the recreation of the scene signifies the rebirth of Christ, every year. While the Christopsomo was originally flatbread, throughout the years it took the form of a sourdough karveli, often spiced up with nutmeg and most recently, people find it in a tsoureki like version sans the eggs. The bread is usually round and bears a cross on the top; made the day before Christmas, and eaten on the following day, at the Christmas table passed on from guest to guest with the first bite dipped in mulled wine.

In most regions of Greece people also bake cookies flavoured with orange, cinnamon and cloves. Greece’s favourite cookies for the season, however, are the melomakarona (soft, nut-filled cookies dipped in syrup and sometimes chocolate on top) and the kourambiethes (butter-based almond cookies covered in white, powdered sugar). In Crete, most families hounour one of the island’s signature recipes, the kalitsounia, every day of the festive season adding a dash of sugar in the mix.

There’s also the Vasilopita, which is served on New Year’s Day and in some Greek towns it resembles a sweat tsoureki, while in others a classic vanilla and orange sugar coated cake.

In this edition, we will share some of the least known Christmas recipes from home.

Method:
1. Cut the veal into large pieces and wash thoroughly; wipe with some paper towel (it is important to dry the meat well, in order to be nicely browned).

2. Heat the oil in a large saucepan, add the meat and garlic in batches so that the temperature of the oil remains high, and sauté, until browned on all sides, with as many garlic cloves as pieces of meal.
3. When done, remove with a slotted spoon, place on a platter, cover and set aside.

4. Slice the leeks, add in the same oil used to brown the meat and sauté. Add the veal and pour in the cognac; wait for a while, until it evaporates. Add the soya sauce, the carrots, the warm water and season with salt and pepper.

5.Place the lid on, turn the heat down and let it simmer for 1 and 1/2 hour. About 10-15 minutes before the veal is ready, add in the pan the dried plums, apricots and almonds and stir.
Serve with pilaff, mashed or roast potatoes. Enjoy! Method:
1. Mix the ground beef, two whole eggs, rice, dill, one of the onions, a little oil and water, and knead to mix thoroughly. Add more water or oil if needed. Form into 34-35 round pieces.

2. In a large soup pot, bring salted water to a boil. Remove the core of the cabbage, and stick a large fork into the center. Immerse the cabbage, leaving the fork in. When the outer leaves turn bright green, lift using the fork and remove softened leaves. Return to pot and repeat until all cabbage leaves have been removed.

3. Using the large outer leaves, place the meat mixture in the leaf and roll, using the same technique as for Rolling Grape Leaves.

4. Line the bottom of a lidded pot with the carrot slices, remaining onion, celery leaves, and the smaller cabbage leaves that were too small for rolling. Lay the stuffed cabbage rolls, fold side down, on top in snugly packed layers. Place an inverted plate on top to hold them down when cooking.

5. Add water to cover, and bring to a boil. When boil is reached, turn down the heat, cover, and simmer for 1 hour.

6. A few minutes before the cabbage is done, make the avgolemono sauce:

7. Whisk the egg yolks and a tablespoon of water. Stir in 1/2 cup of liquid from the pot, lemon juice, and corn starch, whisking until smooth. Remove cabbage from heat, remove the plate, and pour in the egg-lemon sauce. Hold pot by the handles and shake gently to distribute.

8. Serve warm with a few spoonfuls of the sauce over the cabbage. Method:
1. Mix the yeast with 1/2 cup of warm water and 2 tablespoons of flour, stir until dissolved and set aside for 10 minutes, until it bubbles.

2. In a large mixing bowl, sift the salt with 2/3 of the flour. Make a well in the center of the flour and pour in the yeast mixture, the remaining warm water, and the wine. Mix until a soft dough forms, cover with waxed paper and a damp towel, and set aside to rise for 1 1/2 to 2 hours until doubled in bulk.

3. Punch the dough down and knead for several minutes until any air pockets are gone. Sift in the remaining flour, add the oil, orange juice, brandy, and grated orange peel.

4. In a small bowl, mix the sugar, raisins, walnuts, pine nuts, gum mastic or anise, cinnamon, cloves, and nutmeg until blended, and add to the dough.

5. Knead well until the dough is firm and doesn’t stick (about 10 minutes), cover, and allow to rise for 1/2 hour. When the bread has risen, use the small pieces of dough to create a cross on top. If you wish, you can add even more Christmas related symbols.

6. On a lightly buttered baking pan, shape the bread into two circular loaves, about 8 inches in diameter. Cover with a dry cloth and a damp cloth over that, and place in a warm place to rise again, until doubled in size.

7. Using a floured knife, score a cross into the top of the loaves, and place one whole, unshelled walnut at the center. Brush the bread with milk and scatter with sesame seeds.

9. Remove from oven, brush lightly with water, and cool on a rack. 2.Add the oil, mixing with a spoon or hands.

3. Stir in the strained yogurt and eggs and mix with a spoon until the dough begins to stiffen, adding the brandy to soften the dough as needed.

4. Knead the dough in the bowl for approximately 10 minutes until smooth, and set aside to rest.

For the pastry:
5. In a separate bowl, mix the cheese, cinnamon, sugar, egg yolk, orange peel, and flour together until well blended.

6. On a floured surface with a rolling pin, roll a piece of dough out to a thickness of about 1/8th of an inch.

7. Using a 3 to 4-inch cutter or saucer as a guide, cut out circles. (Alternatively, take a piece of dough the size of an unshelled walnut and roll it out to a circle about 3 to 4 inches across.)

9. Place the kalitsounia on the baking sheet and brush lightly with beaten egg to glaze. Bake at 350F (180C) for approximately 20 minutes until lightly browned. Sprinkle lightly with cinnamon.

10. Place a teaspoonful of cheese mixture into the center of the circle, fold the circle over into a half-moon shape. With wet fingers, crimp the edges to close securely. Preheat 1 cup of olive oil over medium heat and fry until golden on both sides. Drain on paper towels. Sprinkle with confectioner’s sugar or drizzle with honey. 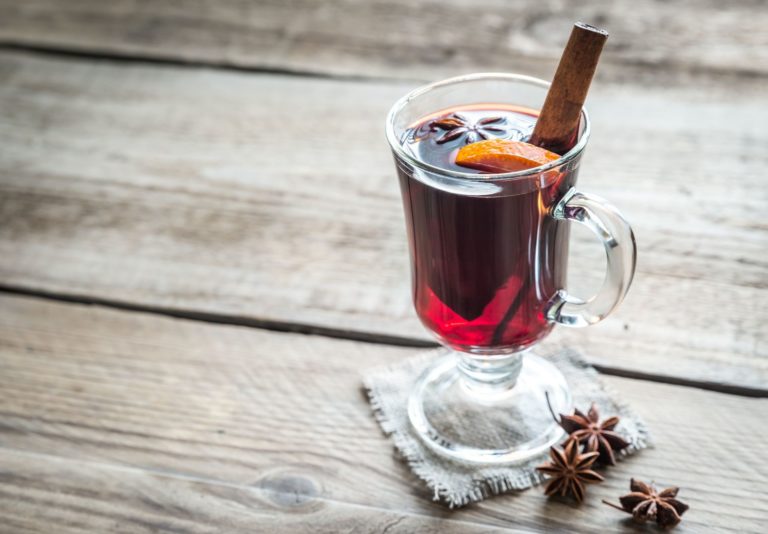 Method:
1.To prepare this Greek mulled wine recipe (krasomelo) pour the wine in a sauce pan and bring to a boil.
2.As soon as the wine starts to get frothy, turn the heat down to low and add the rest of the ingredients. Let the wine simmer, whilst stirring, for about 10 minutes, until the honey melts and the flavors combine.
3. Remove from the heat and let sit for a while.
4. Strain and serve in shot glasses. Enjoy!