Tens of thousands showed up in the Athens centre to protest against the Prespes Agreement. Expats living in Greece could not help but be affected by developments and gave Neos Kosmos insight as to how the demonstration unfolded until it was marred by scuffles between a small number of protestors and the police.

Angela Konstantopoulos went to the rally because “one of the very few things that is left to us Greeks now is our history.”

“They’ve made us poor,” she said. “People have been stripped of homes. Taxes. Immigration problem. The least we can do is to hold on to our history. And Macedonia is a Greek word made by Greeks, not Slavs.”

She said that everyone at the rally felt the same way, and there was a feeling of solidarity in the air. For the most part, people were standing around, showing patience and understanding. “At some point, at around 3pm, it started to rain but everyone remained,” Ms Konstantopoulos said.

“There were about 20 demonstrators who caused some riots. Some say they were paid off. In the crowd there were families and children, and elderly. The elderly seemed to have come on their own. I believe since the protest had begun at around 10 am in the morning, many had come and gone.” 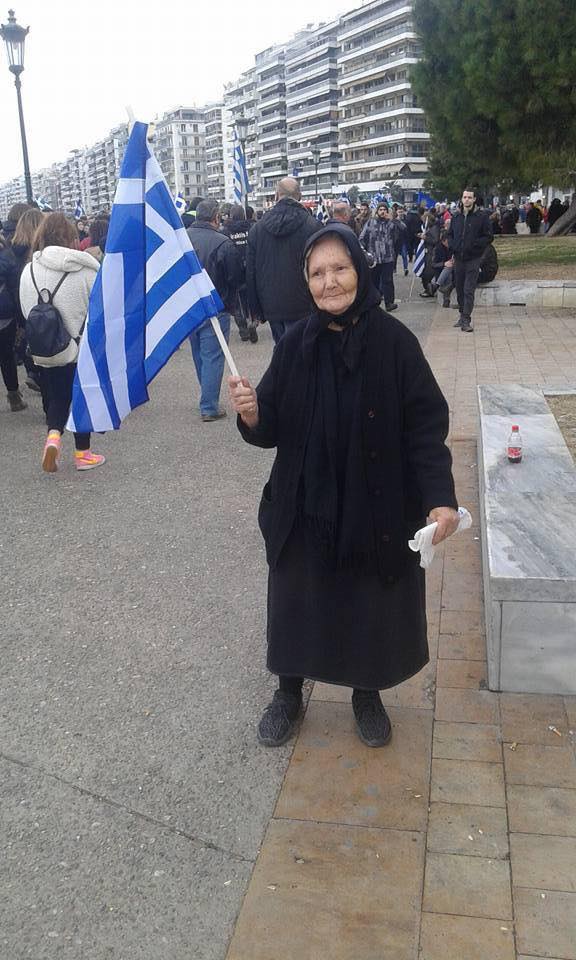 By around 4pm, Ms Konstantopoulos felt the effects of tear gas sprayed onto the crowd. “The people at the front of Parliament were completely gassed. And everyone started running. Luckily we did not trample each other, but there was no cause. No reason to have all this gas. It was unjustified.”

Melbourne-born Chrysanthe Gatzikou said she is glad that she went to the rally, however she left before the troublemakers arrived.

“The atmosphere was fantastic. So many people gathered for a sacred purpose,” she said.

“An amazing feeling. We sang patriotic songs by Mikis Theodorakis, and for Macedonia. There was unity and we were like a large group of friends.

“There were so many people that I didn’t manage to find the friends with whom I had an appointment with at Syntagma Square. I didn’t stay for long because I had to work, but I don’t know what happened afterwards. The news showed some incidents.

“All I had seen while I was there, were some young people with hoods on a balcony, but they were not doing anything at that time. Just watching.

Despite having attended the rally, she does not feel that anything will change. There is no hope. “I believe the agreement will take place. Unfortunately. Now, you’re probably wondering why I went if this is how I feel? Because, despite everything, I wanted to show my presence and express my opposition to the Prespes Agreement. Because quite simply, ‘Macedonia is only one and it is Greek.'”

“There were many Greeks from America and Australia at the rally. You could tell them apart from their accents when they spoke English.” US writer, lecturer and ex-diplomat Brady Kiesling cycled through the rally briefly though he didn’t take the pulse of the crowd. He was there before the tear gas was sprayed on to people.

He saw a “fair number of guys with close-cropped heads, black track suits, and axe-handle flagsticks” and “heard pious denunciation of the US, Germany, and the Soros Foundation.”

After going home he watched the events unfold for a few minutes on SKAI TV, and the reportage was fixated on a demonstrator on the parapet throwing things at the riot police. “At one point he dropped his sweatpants to grab his private parts and mock the police who were, at that point anyway, patiently blocking him and his fellow black-shirts from reaching the parliament building.”

Debbie Papadakis, originally from Sydney, wasn’t at the rally because she had to work. “Things are not a luxury for us in the Private Sector and we have to drop things and run when it comes to providing for the family,” Ms Papadakis said, referring to an “economic war”.

“There are a great number of things happening at the same time, such as excessive taxation for individuals and small businesses, reductions in salaries, reduction in pensions, delays in payments of payments to the public of money that is due and all this is making this nation difficult to live in, which almost seems to be intentional so that we would get up and leave,” she said. “If there was a rally, like the one that was held on 5 July 2015 when 60 per cent of the Greek Population voted ‘NO’ to Memorandum Measures brought upon us by IMF and Troika, I think many more would have turned up unified.”

“The media is focused on the ‘heated issue’ of the Prespes agreement between Greece and the FYROM. Soon, it will be focusing on Turkey Cyprus and the Dodecanese. I remember when asked in 2013 what will happen to Greece, the first thing I said was that they would not leave her alone. They will try and divide her into three sections,” she said.

“The Slavic countries in the Balkans know that Macedonia is Hellenic, however, there are other lurking dangers to these agreements that we do not yet know. This is why there is Political turmoil amongst the political parties. Are agreements being currently made under the tables promising positions to win votes amongst the politicians that are gathering to vote on the Macedonian issue? I do not know. Time will reveal.”