My yiayia, the Greek widow and a journey into the grieving process 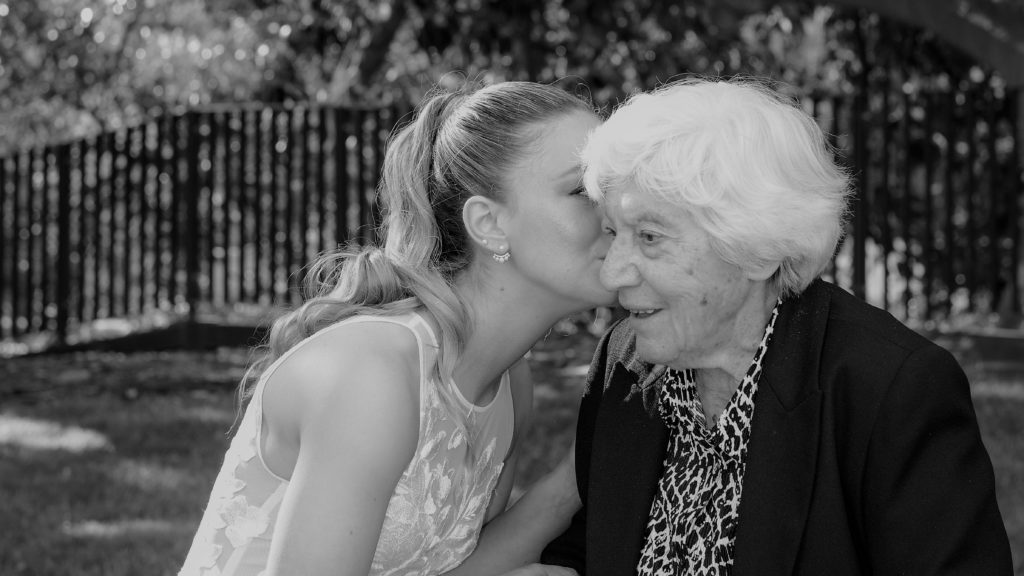 Like most third-generation Greek children growing up in Australia, Dr Georgia Rowley Panagiotopoulos was raised in a Greek family environment with her grandparents ever-present in her daily life, back in the Riverland region of South Australia.

As a young girl she found her pappou and yiayia’s life stories fascinating.

“Following World War II, my grandparents migrated to Australia hoping to make a better future for themselves. They worked hard, they had children and dedicated their lives looking after our family,” Dr Panagiotopoulos said.

She came face-to-face with the idea of death for the first time at the age of seven when her beloved pappou died suddenly from a heart attack. He was in his 60’s.

As a child, she also had to deal with the subsequent grieving process.

“I will always remember the seemingly unrelenting darkness that enveloped the household and how his loss affected my yiayia, who almost immediately cladded herself in black, banishing all colourful clothes from her home and brought herself and the rest of the family into mourning his loss for days, weeks, months, and years,” says Dr Panagiotopoulos who even at that tender age couldn’t help but notice that for some inexplicable reason the mourning for her Greek yiayia appeared to be considerably more difficult than for people of other cultural backgrounds.

According to Dr Panagiotopoulos, bereavement signals the period of grief and loss that immediately follows the passing of someone significant, whereas mourning reflects cultural practices, denoting the actions and manner of grief expression.
Evidently, bereavement and grief are inherently individual; no two individuals react in the same way to a loss and various factors determine bereavement outcomes, including age, gender, nationality, religion, culture, socio-economic status, social support and isolation, familial factors, childhood and later-life experiences, and finally, the relationship and strength of attachment.

“Culture and religion can also dictate what is socially acceptable in mourning, but they are not always prescriptive.

“In our case I remember initially, there were endless streams of visitors, a viewing conducted in the family home, an open casket funeral. A multitude of religious mourning rituals were enacted on specified dates post-death (e.g. 40 days). Cemetery visits were ritualistic and occurred daily during these early years. Music, TV, parties – myriad things which held connotations of enjoyment and pleasure – were shunned. Celebratory family events like Easter and Christmas were clouded by mourning and lamentation,” Dr Panagiotopoulos said, admitting that the fog of bereavement held such a tight grip for her family for what felt like decades after her pappou’s passing.

Fourteen years later she decided to dedicate her PhD journey delving into the depths of bereavement and investigating the impact of mourning on the individual’s well-being, taking into account the cross-cultural differences of people.

After interviewing a significant number of Greek migrant men and women and comparing their experiences to the experiences of older British widows and widowers, Dr Panagiotopoulos found significant cultural differences in variables such as depression, loneliness, self-rated health, perceptions of family support and not surprisingly, in the performance of mourning rituals.

She also discovered that mourning the death of a spouse in the Greek community can be a drawn-out process, often continuing until the remaining spouse passes away.

“Widows often wear black clothing to show their loss, and mourning rituals are frequently extensive,” Dr Panagiotopoulos said, while also pointing out that a very small number of widows or widowers of Greek background remarry, regardless of their age at the time of their loss.

Furthermore, Dr Panagiotopoulos, who is currently a Research Associate for ELDAC (End of Life Directions for Aged Care) at the Flinders University in South Australia, observed that Greek-Australians are typically afforded countless ritualistic ways in which they publicly mourn the loss of loved ones, in line with culture and Orthodox religion whilst church funerals and associated mourning rituals are highly regimented.

Another interesting find showed that grief and bereavement in Greek culture is gendered and that women, more so than men, are traditionally expected to perform more of the grieving work and adhere to associated customs and practices.

“Strict roles and expectations provide a grieving template of sorts for older Greeks, who may feel obliged to follow such predetermined, implicit and explicit acts of mourning and rituals. Anecdotal evidence suggests Greeks grieve more publicly or lament the loss more openly than Anglo-Australians. Physical and emotive reactions to the loss, like crying and wailing, are commonplace,” Dr Panagiotopoulos said, expressing the concern that the landscape of grief in Australia is changing, but Greek rituals and practices are still considered the norm culturally as a way of not letting go of the bond with the deceased; however those rituals still have implications leading to increased rates of depression and loneliness, potentially affecting the health and wellbeing of the surviving partner.

Dr Panagiotopoulos’ research also found that health outcomes were also compounded by a shortage of social networks outside the immediate family amongst these migrants who typically have lost their main source of comfort, support, and social interaction.
“Linking people with others in similar circumstances could lessen the loneliness and isolation experienced by widowed migrants,” she said, suggesting that possessing a meaningful grief framework may assist bereaved individuals to understand, incorporate, adjust to and accept the finality of death.

“From a personal standpoint, there are factors associated with grieving that I perceive to be inappropriate based on my upbringing and cultural understandings, such as wearing bright colours to funerals or playing loud music, but over and above the influence of culture, we must appreciate that individual differences within groups are crucial and require acknowledgement. Individuals of similar socio-cultural and contextual backgrounds may still experience bereavement and loss differently; however, we all need to keep in mind that irrespective of circumstances and cultural background, everyone needs someone to talk to, and when English isn’t your first language this can also be a deceptively difficult thing to achieve.

“There are times I can’t help but wonder how successive migrant generations will experience death after decades of residing in a ‘foreign land’,” Dr Panagiotopoulos said.