North Macedonia is here – and yes, it will take a lot of getting used to Here are five headlines that appeared on Tuesday 12 February:

Everything you need to know about the implementation of the Prespes Agreement between Greece and the country now officially named North Macedonia lies in these headlines.

Most Greek media outlets – Neos Kosmos included – have been trying with various degrees of success to adapt to a new reality that is, to say the least, uneasy. For more than 25 years, Greeks have been calling the country located on the northern borders of Greece, by the name of its capital: Skopje. Imagine New Zealand calling Australia ‘Canberra’ and you will see how absurd and pointless this is.

Media organisations committed to the rules of journalism have shown restraint and have been using the country’s official interim name: Former Yugoslav Republic of Macedonia – the name officially recognised by Australia, among others.

So, when we wrote “FYROM changes its name” we were correct. The Former Yugoslav Republic of Macedonia was installing new signage, displaying the country’s new name, North Macedonia. In their effort to adapt to this new reality, some Greek media outlets have been putting the new name in quotation marks: ‘North Macedonia’, as if this is an alleged name, an alias, a nickname even – not the outcome of a bilateral agreement between two sovereign countries, bound by international law; not the name that the country is actually using in its official documents, government buildings and agencys; not the name that will be used by all other governments.

This awkwardness led Proto Thema to print an outright lie: “FYROM signs taken down?” Really? No, FYROM signs were not taken down, because there were not FYROM signs in the country. The signs that were taken down did not write “FYROM”; they wrote “Macedonia.” 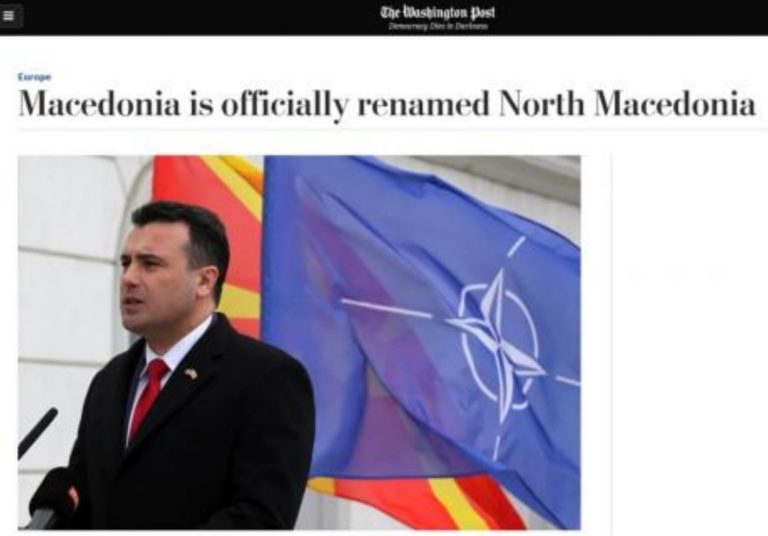 Which brings us to the Washington Post and Associated Press headlines. Two of the most respected news organisations in the world told things as they were: Macedonia – that is, the country that the US had recognised under that name – is now officialy renamed North Macedonia. All countries that had recognised the country formerly known as FYROM under the name ‘Macedonia’ now have to use the name ‘North Macedonia’. Without quotation marks. The same goes for countries that used the acronym FYROM – Greece and Australia included. By the way, Australia already moved forward with it.

This is where the fifth headline enters the picture. Some communities of natives of North Macedonia in Australia are not happy with the outcome of the deal. And they protest by raising flags sporting the Vergina star – or sun, if you like, both answers are correct – because of course they would. What would anyone expect from a group of nationalists?

Take a tour around their social media and you will find them full of images of the Vergina sun, red and yellow flags, references to Alexander the Great – and the occasional map that shows their borders expanding to include Thessaloniki and Halkidiki.
All these things abound in North Macedonia as well – but from now on, they are banned from official documents.

The Prespes agreement is legally binding; it expressively forbids the government of North Macedonia – all aspects of government, that is – to use the Vergina star. If they print money with the star, or with Alexander the Great, if they print maps that include Thessaloniki, they will be taken to the Hague, to the international court. This is what the agreement has achieved.

This, and having all official references to ‘Macedonia’ now changed to ‘North Macedonia’. From Wikipedia to the BBC, from the United Nations to Angela Merkel, who recently spoke of North Macedonia, the new name has been already adopted. At the 2020 Tokyo Olympics, athletes will compete under the name of North Macedonia – and the Channel 7 commentators will have to say these two words, instead of just plain ‘Macedonia’ – sparing the Pan-Macedonian organisations from the trouble of sending strongly worded letters to the network. Of course, commentators might still talk about Alexander the Great, like Bruce McAvaney did in 2016. Because this is the difference between institutions and individuals. Institutions are bound by international legislation. Individuals can do and say what they want. There is no reason to expect that to change. Any nationalist hothead will keep on like they used to.

Pretty much like some Greeks who print maps showing ‘Constantinople’ as the capital of Greece. Pretty much like Greeks who refuse to utter the word Istanbul, adhering to the name of a long-gone Byzantine capital – the equivalent would be Italians refusing to use the word ‘Parigi’, insisting on calling Paris as ‘Lutetia’.

Since North Macedonia made its debut in the international news, an army of online trolls have been… well, trolling media organisations reporting on the name change – or even reporting news from North Macedonia, such as the tragic bus accident that led to the deaths of 15 people. “Deadly bus crash in North Macedonia sparks days of mourning,” Deutche Welle reported. “Skopje,” responded the trolls, urging to ‘correct’ the news stories. The army of trolls was joined by the regional government of Western Macedonia in Greece, Apostolos Tzitzikostas who pledged that road signs in his region will write ‘Skopje’, not ‘North Macedonia’. The fearless patriot failed to add that road signs write the names of cities, not countries, but who cares about the truth, when a lie sounds so much better?

Yes, Tzitzikostas will continue to use the word ‘Skopje’. So will do Greek people all around the world. At the same time, the citizens of Skopje, Tetovo, Bitola, Ohrid will refer to themselves as Macedonians – and so will do the members of their diaspora, with their Vergina stars and their red-and-yellow profile pics and their – officially illegal – maps.

It will take time. But we will get used to it. We will find a way to coexist. After all, we have been doing exactly this for centuries, as fellow Balkanians in this blood-soaked melting pot peninsula in the southeast of Europe.