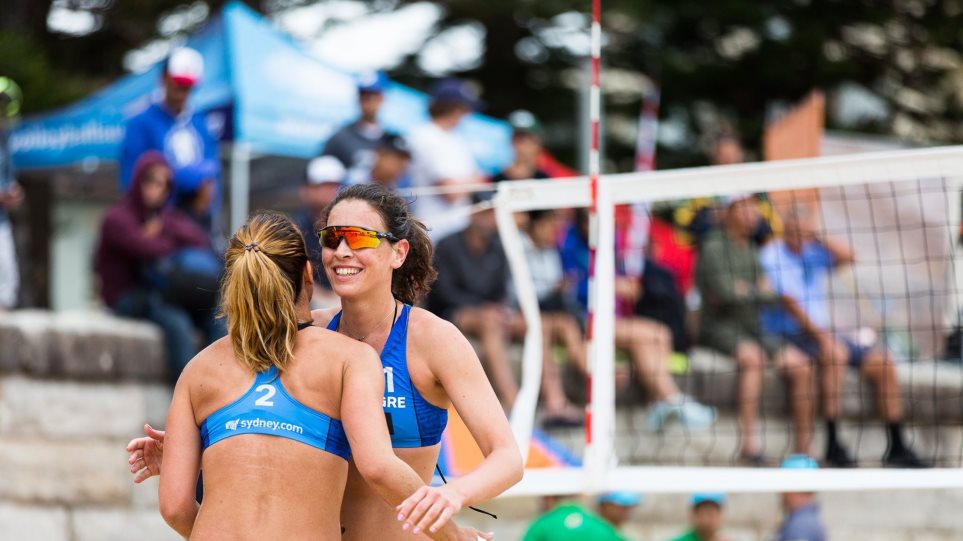 Greek pair Vasiliki Arvaniti and Panagiota Karagkouni completed a four-match winning streak at the FIVB Beach Volleyball World Tour Sydney 3-star, but the team could not be successful against the United States’ Kerri Walsh Jennings and Brooke Sweat despite their stunning trial against the same team in the first round.

Arvaniti and Karagkouni topped Pool F with a 2-1 (17-21, 21-17, 15-9) win over China’s Lin Meimei and Zeng Jinjin, following their two victories in the qualification round.

“Kerri is the best player in the world and we respect her a lot,” Arvaniti told the International Volleyball Federation (FIVB) following the win with China. “We played without fear against her team (Wednesday). It was a great start for us in pool play by beating a great team.

Against the young Chinese pair, the Greek duo counted on their experience to come up with a victory in the third set.

“It was really great because we won our pool,” Karagkouni said. “We were nervous because they were young, free and they had nothing to lose. We came from qualification and had momentum, but I think at the last moment of this match, it was our experience that counted.”

“You have to use the wind and know how to deal with difficult conditions on the court, otherwise you will be in trouble,” Arvaniti added. “We will try to keep our good control and play tactical, and play the best we can.”

Top seeds Taliqua Clancy and Mariafe Artacho Del Solar of Australia, Michaela Kubickova and Michala Kvapilova of the Czech Republic, Varapatsorn Radarong and Khanittha Hongpak of Thailand, Marta Menegatti and Viktoria Orsi Toth of Italy, Megumi Murakami and Miki Ishii of Japan, and Betsi Flint and Emily Day of the United States swept their matches in their respective pools to advance to the winners’ bracket.

Sweat and Walsh Jennings rallied from a set down to win 2-1 (18-21, 21-17, 15-11) against France’s Alexandra Jupiter and Aline Chamereau to move to the next round, together with France’s Lezana Placette and Alexia Richard, China’s Lin Meimei and Zeng Jinjin, and Canada’s Taylor Pischke and Sophie Bukovec.

Australian pairs Nicole Laird and Becchara Palmer and Brittany Kendall and Stephanie Weiler also progressed to the next round.