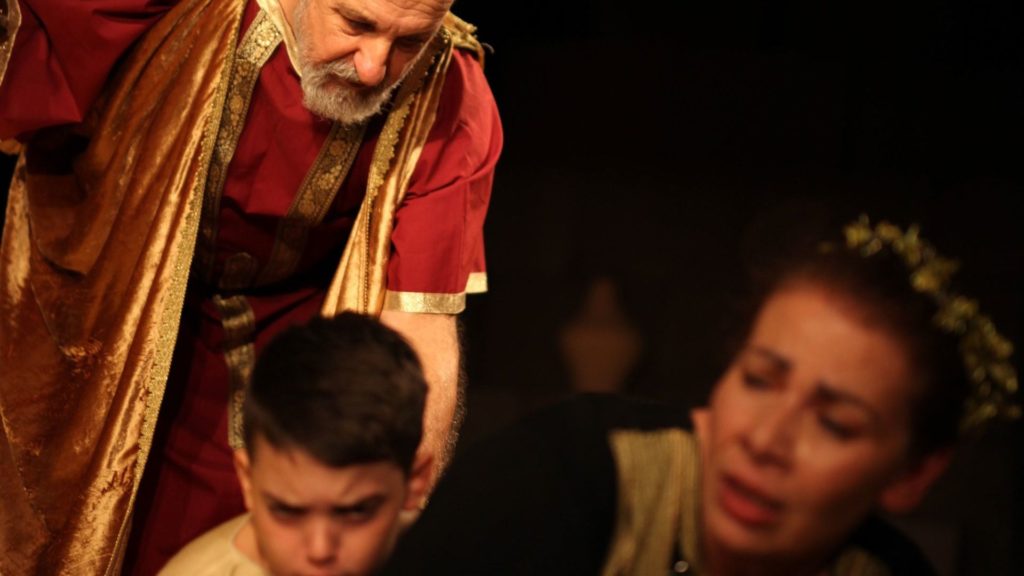 Young Astyanax being torn away from his mother (Andromache) by Talthybios. Photo: Supplied

Considering the conflicts across the Middle East in recent decades, millions of people displaced, and the horrors and abuses against women, Trojan Women is a cautionary tale that continues to be as relevant today as it was 2,400 years ago.

One of the greatest of all antiwar plays, Euripides understood people’s plight, resulting in a timeless and universal meditation on the moments of individual choice that separate life and death, despair and hope, future and past.

Sydney audiences that will attend the performance by the Hellenic Art Theatre (HAT), under the direction of Stavros Economodis, are sure to find it just as relevant as it was in Ancient Greece.

Set in the aftermath of the war of Troy, the tragedy follows the fates of Hecuba, Andromache, Cassandra, and Helen (the Helen).

Besieged for 10 years by the fierce armies of Greece, the legendary city of Troy has fallen in a single night, the victim of clever Odysseus and his wooden horse.

We get a brutal, crude representation of the consequences of war, and the reaction of wives, mothers and daughters to such brutality.

The play begins with the women waking up the morning after Troy’s defeat. Queen Hecuba and the royal women of Troy—having witnessed the slaughter of their husbands and sons—held captive by triumphant Greek soldiers. In the ruins of their burning city, still mourning, they await enslavement and exile.

The imperious queen Hecuba will be sent to serve the wife of her most hated enemy, Odysseus. Her prophetic daughter, Cassandra will be taken as a prize by King Agamemnon. Her widowed daughter-in-law, the noble Andromache, who will wed Achilles’ (her husband Hector’s killer) son, hopes to whisper the legacy of Troy to her young son when they are captive in Greece.

All the women blame Helen, the paramour of Hecuba’s cursed son Paris, for their downfall.

Starring actors John Daviskas as Poseidon, Chris Messaris as Athena, Maria Valaris as Ekavi, Nick Tsioukanis as Talthybios, Athanasia Costa as Kassandra, Evelyn Tsavalas as Andromache, Gaelle Emvalomeni as Helen, Polyzois Patelis as Menelaos and Deon Gama as young Astyanax, adding to the ancient feel will be the masks worn by the Chorus of Trojan women made by the cast.