Greek-Egyptian-Cypriot officials happy with Nostos III, but the tripartite programme’s real success may never truly be visible or recognised in the daily lives of diasporans The Ancient Greek theme of Nostos usually involved an epic hero befalling all manner of calamities as he returned home by sea to finally reach a place of safety and immortality. And Nostos III, that took place in Australia this year, could not have been an easy journey for Greek Deputy Foreign Affairs Minister Terens Quick that was called a persona non grata by some before he even arrived, was labelled as a ‘traitor’ by others for his role in the ratification of the Prespes Agreement, and received condemnation by the Greek media for wasting taxpayers’ money on trips such as this one. Unfazed by criticism, Mr Quick spoke of “success” on Tuesday during the joint press conference with Cypriot Presidential Commissioner for the Diaspora Photis Phitiou, and the Egyptian Minister for Expatiates’ Affairs Nabila Makram.

Mr Quick did not pinpoint any tangible results or success stories because programmes such as this one will no doubt take years to root. He did however refer to the legacy that the visit will leave behind as it builds bridges between different nations and their respective diasporas. In that respect it is hoped that Nostos III will pick up the baton that Nostos II left off in London, and Nostos I began in Alexandria. It’s all about exchange and collaboration and an epic voyage of unification.

All three officials could not stress the importance of youth, and that is where they cast their focus in efforts to fan the diasporic flame for the future.

“We didn’t just have a meeting where kids only talked about cultural matters,” Mr Quick said.

“They also raised matters of concern to young people around the world. They put forth the huge matter of climate change. Climate change that is at this point perhaps the number one matter that all governments should be talking about.”

For Mr Quick, the most impressive element of the meeting with young people was that they didn’t just participate in the forum but they spearheaded it with their own initiatives, presenting plans of action as to how the three countries should exploit their natural resources for wind and solar energy as well as for harnessing natural gas. They even came up with their own slogan – Save GEC – from the Save Australia idea.

“We are investing in the young generation of our diaspora. We want them close to their roots, their history, their culture,” Mr Photiou said, adding that he understands the importance of this, from the perspective of a person whose own country has been divided for 45 years.

But perhaps it was Ms Makram that was the most convincing when it came to the importance of the Nostos initiative. “Before arriving to Australia, I went to New Zealand and I had to visit the families after the tragedy that happened. I was shocked by the statement of the young man who committed this crime that there was an ‘anti’ feeling towards immigrants,” she said, pointing to the Christchurch mosque attack as just an example as to why it is important for immigrants to feel proud and have a positive image of themselves.

“I believe that the Nostos project is coming at the right time to deliver a global message to the world. We need to highlight the role and let them know about their roots.” 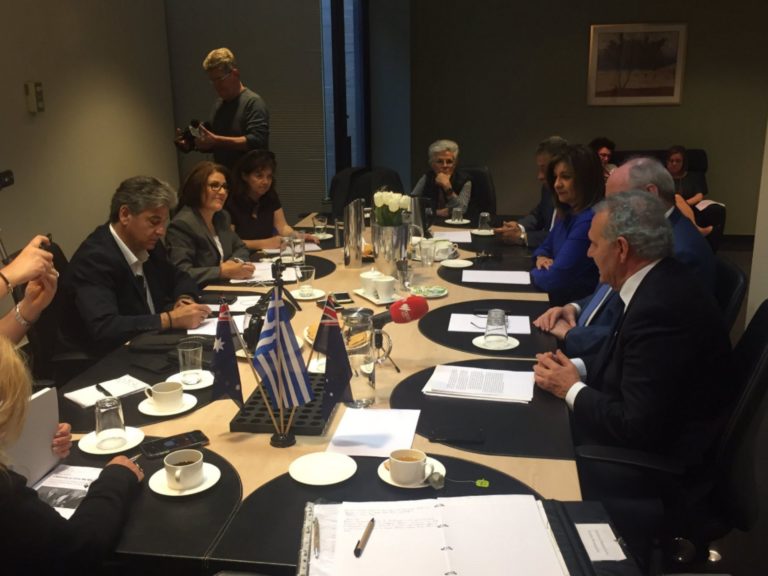 In the spirit of peace and unity, young people of the three countries are being encouraged to – as Mr Quick said – “hang out together”. And to make it more enticing, five young diasporans from each of the three representative nations will go on a trip to Greece, Egypt and Cyprus so that they can explore their common history, roots and identity.

Trips of a lifetime like that can indeed foster pride and connection, but is a fifteen-membered youth delegation embarking on such a journey enough to ensure the survival of the diasporic identity at a time when immigrant associations are complaining that their numbers are dwindling as the older generation dies? Will the university lecture halls be filled with tertiary students wishing to learn Greek or Arabic? Will newspapers such as Neos Kosmos continue to have a reason for existing?

The question was asked as to how Nostos III will affect the daily lives of young diasporans in practical terms, but the response was more political speak. And that’s how it is in epic tragedies, Nostos has always been tied to kleos (posthumous glory), and such is the case with this programme. Its results can only be seen once the seeds are planted well into the future when young people grow into adults who are proud of their heritage – or sometimes we’ll never know the exact success, because one young person may decide to reinforce their identity in a healthy way rather than make the evening news, as Ms Makram so aptly pointed out.