The reunification of the marbles is a ‘cultural one-way’ 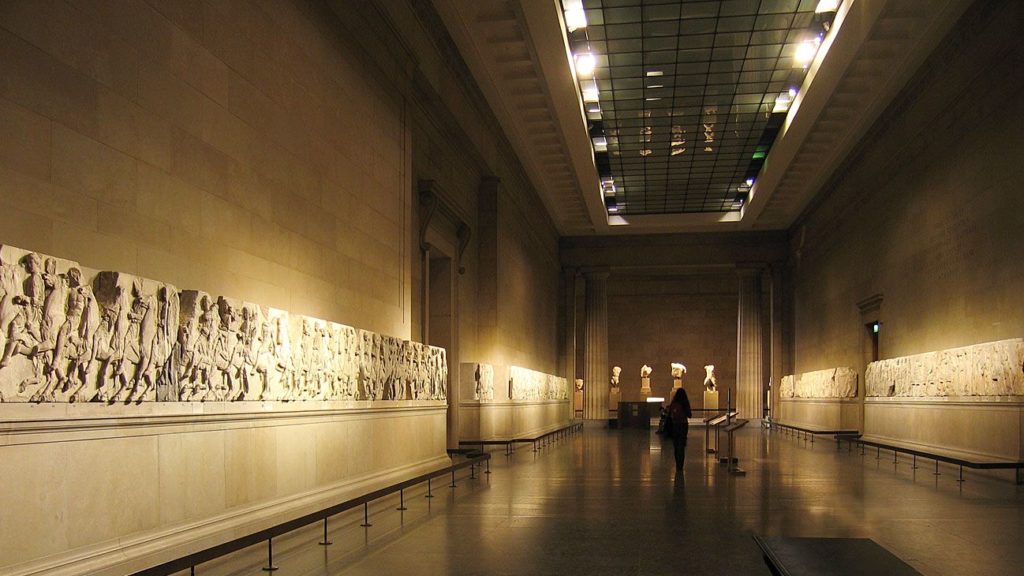 The International Conference on the Reunification of the Parthenon Sculptures was held at the auditorium of the Acropolis Museum in Athens last Monday 15 April and was attended by eminent scholars, archaeologists, historians, architects, barristers, politicians and chancellors.

The event was organised by the Presidency of the Hellenic Republic, Greece’s Ministry of Culture and Sports, the International Association for the Reunification of the Parthenon Sculptures and the Acropolis Museum.

President of the Hellenic Republic Mr Prokopis Pavlopoulos, Minister for Culture and Sports Myrsini Zorba, President of the Acropolis Museum and other esteemed advocates for the repatriation of the Marbles, discussed the latest developments of the dispute as well as points that need to be taken into consideration when deciding the new calls to action.

“It’s colour is, by turns, bright red, creamy white, rosy, tawny, ashy pale; its columns spring up like fair, round limbs, flushed with health; it overcomes you; it is so large and so strong, and so triumphant; no place seems more lusty and alive than this platform of ancient dead stone.” – It is with this quote from Virginia Woolf’s diary when she visited the Parthenon back in 1906 that Ms Zorba started her speech on the importance of the return of the marbles, stressing that “Greece is their birthplace; Athens is their city, while Acropolis and its museum is their natural habitat”.

Marking the 37th anniversary from when the iconic Melina Mercouri first demanded the repatriation of the Parthenon sculptures as well as the celebrating the 10 years from the opening of the Acropolis Museum, Ms Zorba highlighted that “the Parthenon frieze remains dismembered and maimed. It is the open would caused by cultural vandalism, exposed to the eyes of humanity and to the 12 million visitors of the Museum that have the opportunity to witness this would up close, in every detail”.

The Minister said that the reunification of the marbles is a “cultural one-way” in order for the monument of Parthenon to be restored in its integrity.

“This is a constant liability that we have the obligation to resolve with dialogue. A liability historical, cultural, scientific, aesthetic, political and ethical.”

The only ecumenical cultural monument, the Parthenon, has been for over 2500 years demanding our respect therefore “we are opposed to any idea of manipulation and any selfish calculation, any submission to logical arguments of any level, any dated request”.

Ms Zorba ended her address by stating she is optimistic and hopeful that the Parthenon “will earn its reunification”, adding that the return of the sculptures to their birthplace is everyone’s responsibility, thanking everyone that has pursued this cause and advocated for the issue’s resolution.

Meanwhile, Dimitris Pantermalis, professor and the curator of the Acropolis Museum stated that “for the first time, we now know the Ottoman side of the story of the Parthenon Marbles rather than just the English side”.

Based on evidence through researching the Ottoman archives between 1800 and 1830, it was uncovered that the Ottoman Sultan gave permission to Lord Elgin only to conduct excavations around the Parthenon, not to take the Marbles.

Contrary to the British Museaum’s claims, the Sultan, who was the absolute ruler of Greece at the time, never granted permission to transfer the sculptures outside of the Ottoman Empire, to which Athens then belonged.

Commenting on the revelation, eminent Professor Paul Cartledge said that “it took an extraordinary set of circumstances that ripped the Parthenon sculptures away and it will take another extraordinary set of circumstances to reunite them and that Elgin’s so called Firman could never have allowed the willful destruction and theft that Elgin executed”.