The Frydenberg Factor: Australia’s Treasurer tells NK what Greeks stand to gain or lose at the next elections

NK's Fotis Kapetopoulos spoke to Australia's Treasurer about issues of Greek interest, and we got a glimpse of the man behind the country's finances

“Do you mind if I eat while we talk?” Federal Treasurer and Deputy Leader, Josh Frydenberg asks. It’s 3pm and he has forgotten when he last ate.

During an election campaign food and sleep are overlooked necessities. I remind him that former Victorian Liberal leader hopeful John Pesutto helped set up the interview.

“He’s Italian, you’re Greek,” Frydenberg jokes. “We are all cut from the same cloth, Jews, Greeks, Italians,” he laughs.

Kooyong up for grabs

Pesutto, a moderate, lost the blue ribbon seat of Hawthorn in last year’s Victorian election. He was a victim of the right-wing putsch by Peter Dutton and others, who forced Prime Minister Malcolm Turnbull out of office in 2018. Scott Morrison and Josh Frydenberg stymied Dutton’s ambitions – for now. There is a fear now that Kooyong, an historic Liberal seat, may also go the way of Hawthorn.

Victorian Liberal voters, urbane, socially progressive, are seething at the dumping of Turnbull. They worry about a shift to the right. They care about the environment, refugees and LGBTIQ. Frydenberg is now working extra hard to maintain Kooyong, a jewel in the Liberal crown.

“I work for the people of Kooyong and will continue to work for them. This is my place, my home. I care for this electorate and its people,” Frydenberg emphasises.

After his first attempt to win Kooyong from the former member, maverick and progressive Petro Georgiou, Frydenberg was advised to try for another seat. Frydenberg refused, saying that Kooyong is his home and that is where he feels connected.

Driving to Neos Kosmos, daily in Hawthorn, one is greeted by a large electronic billboard with Frydenberg’s beaming face. Money on advertising, billboards and communications is being spent handsomely.

Barrister and refugee activist, Julian Burnside, now in the Greens, is trying to harvest disaffected left-leaning Coalition voters. Labor candidate Jana Stewart on the other hand, has committed her preferences to Oliver Yates, the former head of the Clean Energy Finance Corporation — and a former Liberal, one of the disaffected.

“If you vote for any Independent, or a Green in Kooyong, you’ll get Bill Shorten,” says Frydenberg.

‘Laboresque’ budget, but will it save the Coalition?

The budget includes hefty spending on infrastructure, like road and rail, tax cuts for lower and middle-income earners, significant small business handouts as well as projected surplus on the horizon. Frydenberg calls it “an economic plan for the next decade.”

“Greek Australians run small business, in property, in hospitality, trades, and in services. This budget is for them.

Frydenberg wants to “ensure record funding for hospitals, for schools, aged care disability support for carers,” and scoffs at Labor’s claims that the Coalition has presided over “savage” cuts to health and education.

Frydenberg says that many Greek retirees will be hit by what he dubs ‘Labor’s new retirees’ tax’ calling it a ‘blunt instrument.’

“It’s a lie just like their ‘Mediscare’ during the last federal election.” ABC’s Fact Check backs him on that, calling the Opposition’s Ms Plibersek’s claim that the Coalition slashed $22 billon from education “misleading.”

READ MORE: Putting the Budget to the crash test: What’s in it for you?

Frydenberg’s Budget is framed as an unambiguous contrast to the uncertainty in Labor’s proposition to repeal negative gearing and to tax retirees’ franking dividends.

“Paul Keating has been very critical of the Labor Party’s plans to increase the top rate of income tax and Wayne Swann is on the record saying that changes to negative gearing would be an economic disaster,” Frydengerg says.

“With respect to negative gearing, investors in the property market ensures that rents are lower than they otherwise would be, and anybody who rents their property will be pay more under Labor.”

He points to SQM Research that that predicts prices will fall nationally by 5 per cent and 12 per cent by 2022 if Labor scraps negative gearing and halves Capital Gains Tax discount from 50 per cent to 25 per cent.

“If you rent in Victoria your rent will go up more than $65 per week. Anyone who owns a property will see it worth less under Labor.”

‘Frydenberg says that many Greek retirees will be hit by what he dubs ‘Labor’s new retirees’ tax’ calling it a ‘blunt instrument.’

“The majority have taxable income under $37000, they are not wealthy people,” he says.

The Reserve Bank governor identified the lack of wages growth as a wider economic undesirable. Frydenberg agrees, and wants to drive wages growth by creating a “strong economy with more jobs and higher productivity”.

“Over the current cycle, Australia’s labour productivity has grown at an average rate of 1.6 per cent” he says, but concedes that growth “has been softer more recently.” 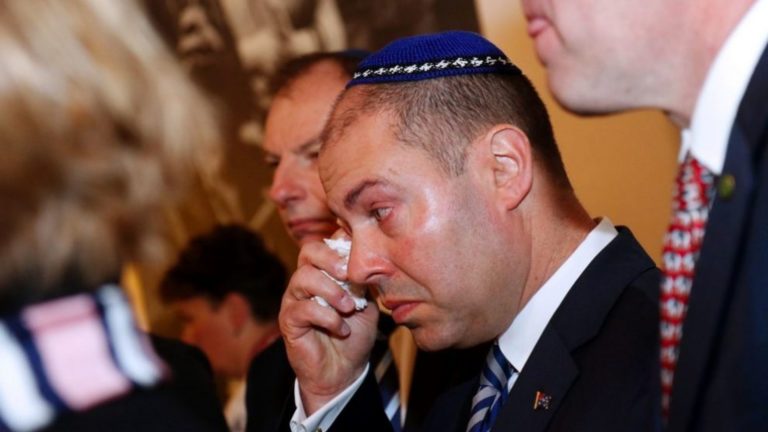 The Right’s colonies in the Liberal Party

Frydenberg’s mother, a Hungarian Jew arrived in Australia in 1950 as a stateless child from a refugee camp after escaping from The Holocaust. His father also Jewish migrated to Australia from Poland. He knows what racism and bigotry feel like, at the beginning of the campaign his posters were defaced by Neo-Nazis.

The right wing gaggle that seems to be colonising the Liberal party has been a problem for moderates and centrists. The recent revelations about Islamophobic social posts by the now dis-endorsed Liberal Jeremy Hearn, or Evangelical Christians stacking the Victorian branch to block LGBTIQ people do the Coalition no favours. Right wing ideologues are suck the oxygen out what has been, on the whole, good performances by Frydenberg and a reasonable one by Scott Morrison.

“Hearn and people like him do not represent the Party, and that’s why he’s no longer a candidate, we acted swiftly to dis-endorse him,” Frydenberg says.

“There is also deep anti-Semitism among a number of other candidates.”

He leans on Menzies, the Liberal Party’s father for philosophical premises, and lists “personal responsibility, reward for effort, and a strong safety net and help for those who need it,” as the Party’s and key values.

We are all migrants but we all want to live in Melbourne, or Sydney

Frydenberg has an armoury of qualifications. He has law, economics and international politics degrees from Monash, Oxford and Harvard and always wears his migrant heritage, faith and culture with pride.

“You and I are the products of migration,” he says.

“Migration has made Australia strong, prosperous and harmonious nation and I want that to continue.”

He has no issue with the word multiculturalism, and says that regardless of debate he feels confident and strong about using and describing Australia as a multicultural nation and promoting its values.

This latest act of vandalism in Kooyong using Nazi symbols on a billboard of mine is an insult to every victim of the Holocaust & Australian servicemen & women who fought against Nazi tyranny.

The previous member for Kooyong, Petro Georgiou was an architect of Fraser’s multicultural policies and crossed the floor on refugee issues during the Howard Government.

Frydenberg worries though about unplanned population growth and says more could have done more over years to “manage that growth”.

Melbourne is growing by two thousand people per week and that growth is “putting pressure on health, education and transport services” he adds.

Frydenberg underlines the budget’s “investment in significant infrastructure projects in Victoria, like the fast rail between Melbourne and Geelong, which will unlock the potential in the regions and also assist with congestion in city.”

Frydenberg says that the Greek community “has had a massive contribution to Australia economically, socially and artistically”

He highlights the positive relationship between “our two nations” and characterises it as “strong and absolutely critical.”

The Coalition has also “commitment of $5 million to the Greek Centre in Melbourne for two priority projects.”

He welcomes the final agreement after so many years between Australia and Greece for a working holiday visa, as well as Australia Greece social security agreement.

Pension changes that came into force this year, means that pensioners who moved back to Greece prior to reaching the age pension age, “are now receiving an Australian pension based on the number of years living in Australia”.

Frydenberg a seasoned tennis player beat Mark Philippoussis, ‘the Scud’, “It was in doubles a long time ago and I had hair then” he says.

In the photo sent by his adviser the Treasurer is holding a soccer ball and is standing next to Kimon Taliadiros the Football Victoria President. On the question of his football prowess he is frank, “I can’t play well but I try.”

Frydenberg’s budget scored a few goals in the last minutes of the game. Can it do enough to secure a victory for the Coalition? Not according to the bookies.

On the other hand, will Frydenberg be the leader of a future Liberal Party? No bets on that yet.