Karate’s popularity on the rise among Greek Australians

More and more Greek Australians have started to turn to the martial art as a way to stay in shape. For those who wish to follow a more professional path, things aren’t so easy however The young athletes of Karate Victoria show plenty of promise for the future. Their accomplishments become even greater when taking into consideration that they have almost no financial support. Photos: Alex Anyfantis

The loud “kiai” sounds (a scream that is used to scare the opponent into losing their focus) vibrate the walls of Victoria University before one even enters the dojo.

That, with the addition of the stomping feet on the tatami (soft floor mat that is used to cushion the falls of the athletes) are usually the most distinguishable ways of knowing that karate training is in session. The number of athletes gathered at Vic Uni is astonishing, as they need to take turns in order to do the exercise shown to them by their sensei (teacher), since there is simply not enough room for them all (in a dojo that is otherwise used as a full-sized basketball court).

As the karateka (karate athlete, in Japanese) are continuing their training, a loud “yame” sound is heard from across the room that brings them all to a halt. Their sensei has decided they have spent enough time on this particular move and it is time to try something different. The students of the dojo all sit on the tatami and obediently listen to what their next exercise will be, but also how it can be applied to a sparring contest (also known as “kumite”).

Yet another intriguing fact is the number of different people at the dojo, across all age groups. Everyone is giving it their all and it seems their energy is contagious, as one tries their hardest to keep up with the other. Of course, there are many Greeks here as well who have made a name for themselves among their peers thanks to a lot of hard work and dedication, but also the guidance of their seniors. Nowadays the names of these athletes can be seen within the ranks of the best in the region in their respective age groups.

There can be no greater example than 17-year-old Marianna Sampanis, who started karate in Greece thanks to one of her best friends, then moved on to become Greek national champion in the kata division and recently won silver in the Oceania championships.

“Karate has taught me respect and to appreciate everything and everyone,” she tells Neos Kosmos.

“It has also boosted my confidence, because that’s one of the key aspects of karate. And my mind is becoming stronger, since you need to control your mind, if you want to control your body.”

Yet another athlete that counts many great wins, most important among them being the kumite silver medal in the youth division at the recent Oceania games, is Dean Dritsas, who explains that he started karate at the tender age of four.

“My dad got me into it as a bit of self-defence and I fell in love with it, the self-discipline and the camaraderie that you get with everyone else and so I got into the state and national team really quickly. I was only nine years old, and since then, it’s become my life.”

It’s a similar story for Dean’s elder brother, Athan, who after many great accomplishments in the junior division has now entered the seniors.

“It might be a bit more challenging, but I welcome the challenge and that push only makes me hungrier [for success]. I just competed a couple of weeks ago in the Oceania championships as a senior in the under 67 (kgs) category. I got a silver medal there, so I was pretty happy with myself,” says Athan.

“I love the sport, I love competing, I love the training. I have to sacrifice a lot of things but the main thing is that I get to travel around the world, so I feel like I’m rich with experiences and culture.” 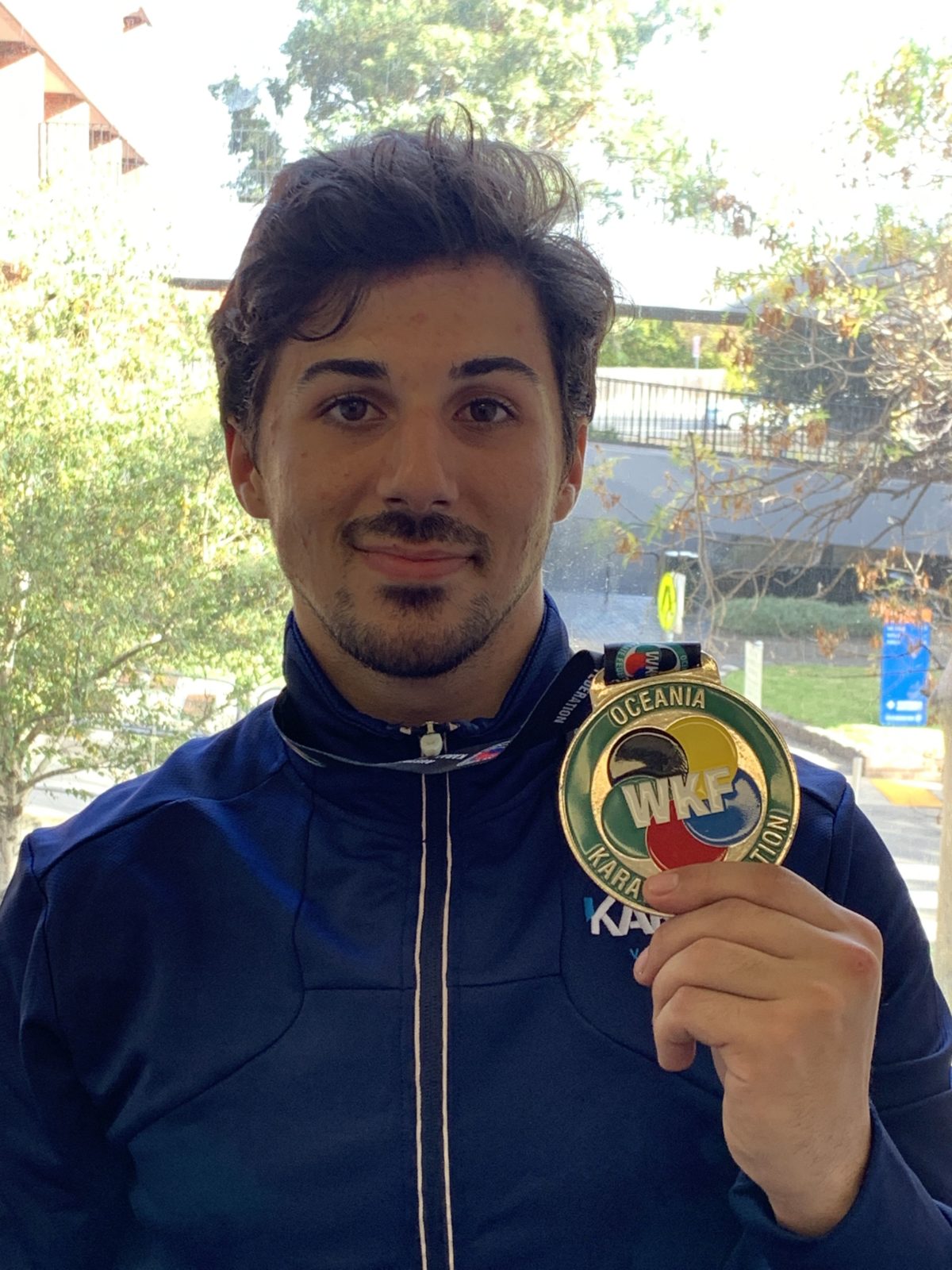 Athan Dritsas proudly shows off the medal he won at the recent WKF championships.. Marianna Sampanis was the National champion of Greece before moving to Australia and winning the silver medal at the recent Oceania championships. Dean Dritsas is only one of the many young Greek Australians to take up Karate in the past few years. When the Sensei talks, all other athletes in the dojo remain silent. A few of these athletes already have an impressive collection of medals, despite their young age.

These sacrifices that Athan speaks of are common for all athletes that attempt to reach the championship level in karate (or even all martial arts) and don’t just affect their personal life, but their financials as well, since there are little to no funds in order to support their efforts. Despite a recent report released by AusSport that reveals a significant rise in participation by Australians in martial arts, the go-to weekly exercise option for 1.2 per cent of the population, government at both state and federal levels have offered very little in the way of funding.

Karate Victoria representative and gold medallist at the 2012 World Karate Championships in Athens, Maria Alexiadis knows this struggle all too well, having walked the path of becoming a professional karateka.

“Karate has never been funded before. There will now be a little bit of funding coming from the state,” she says.

“The way funding works is, if there’s an athlete that’s going to win a world medal, or Olympic medal, or something of equal worth, then they’ll receive funding from the federal government. But, in order for us to have any athletes that meddle in World Championships, we need to give them money to get there. Karate Victoria are trying to support all athletes that make it to junior or senior World Championships, but we don’t have any staff, it’s all volunteer-based.
“So it’s really hard. We heavily rely on goodwill, volunteers and parents who put up all this time and effort to try and support our federation and our clubs. I’m hoping that this little bit of funding, in addition to the AusSport report, may help for us to get even more in the future. It’s all based on participation numbers.”

Regarding Australia’s possibilities for the upcoming Olympics, the member of Karate Victoria remains grounded, pointing out that the country definitely does not lack the talent; rather it’s the limited resources that might not allow the nation to reach its full potential.

“It’s really hard for 2020. We have some athletes in really good positions, but we need them to start going overseas. So the problem is the funding. They need to be going to tournaments from now until the end of December in order for them to go up in the rankings and enter the Olympic tournament. How realistic is that..?”

But even if they don’t manage to succeed in Tokyo, Alexiadis points out that these athletes still have plenty to fight for.

“We will keep working. World Championships is the ultimate for us, just as it is for all sports. Olympics is a way for us to expose our sport to the wider public, but any athlete would give anything to win a World Championship so we’ll have our athletes continue to work towards that cause.”