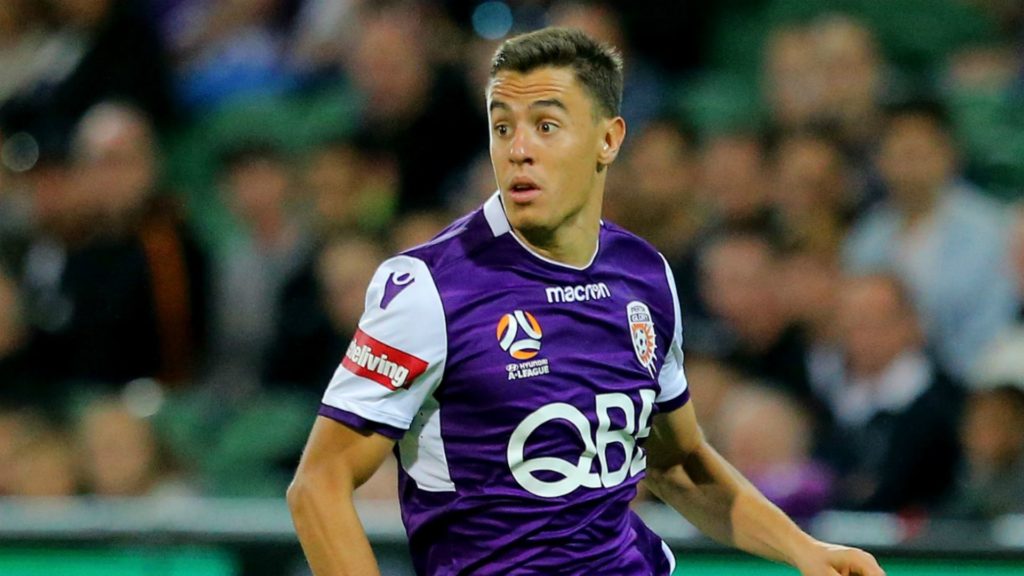 Just when he thought it couldn’t get better, Greek Australian player Chris Ikonomidis, 24, was named NAB Young Footballer of the Year.

His outstanding form, under the guidance of Tony Popovic, saw Ikonomidis win a recall to the Socceroos’ squad mid-season where he played a starring role at January’s AFC Asian Cup. He is also aiming to win his first Grand Final on Sunday when Perth take on Sydney.

The attacker, who joined Glory at the start of the campaign from Lazio attributes his fine form to his self-belief after spending several years in Europe as a teenager.

“My secret is to be confident,” he told Neos Kosmos.

“All those technical and tactical sessions I had over in Italy in my youth years from the age of 16, I still draw on that stuff every game I play here in the A-League. I’ve already played different positions here at Perth Glory this season, on the wing, striker and number 10 Trequartista position and that helps give the team and myself an edge being able to move across the front positions.”

Ikonomidis’ Perth teammate Diego Castro also received end-of-season accolades including the Fox Sports Player of the Year award and he believes the Greek Australian will be crucial for Glory in Sunday’s decider against Sydney FC.

“The best thing for me is that we played in the finals together and we need to focus on the Grand Final and try to achieve the championship,” he said.

“He is an important player; he is growing up quickly as a footballer he has performed well. As long as he is playing for our team it is better for us.”

Ikonomidis also revealed that the combinations on the field with his teammates has also been a big factor for his success this season.

“That plays a big part,” he said. “Knowing how your teammates want the ball, knowing what they do with the ball helps a lot. If you have a player who is fast and wants the ball in behind and doesn’t want it at his feet, then that is how you have to play him out on the pitch to get the best out of him and eventually the best out of you.”

Castro spent several season playing in La Liga, the top league of Spain and he believes that Ikonomidis also has what it takes to play with Messi and co.

“He has potential to play for everything we will have to see what level he gets to,” he said. “He just needs to dream, he need to think bigger, to dream bigger and we will see what what happens in his next step. But for sure if he keeps working that hard I predict a fantastic future for him.”

Meanwhile Ikonomidis believes he has what it takes to play in Europe again.

“You have to be open minded when you go there and try and learn as many things as possible and adapt to their footballing culture,” he said

“Because it’s obviously very different to anything else in the world. Just to play there game and play to their best of your abilities. Modern football is always changing, it’s crucial to know different positions and know them well.

“The manager can change their ideas and formation quickly and you can soon find yourself without wingers or number 10’s with false striker so you need able to adapt and it really helps yourself to be able to play different positions.”

Congratulations to @chrisikonomidis from @PerthGloryFC who wins the 2018-19 #ALeague Young Footballer of the Year award. He is the first Perth player to win the award since Nick Ward in 2005-06.#DolanWarren pic.twitter.com/COUEKbaCPU