Demetri Martin: ‘My sense of humour is from Greek School and as an Altar boy’ 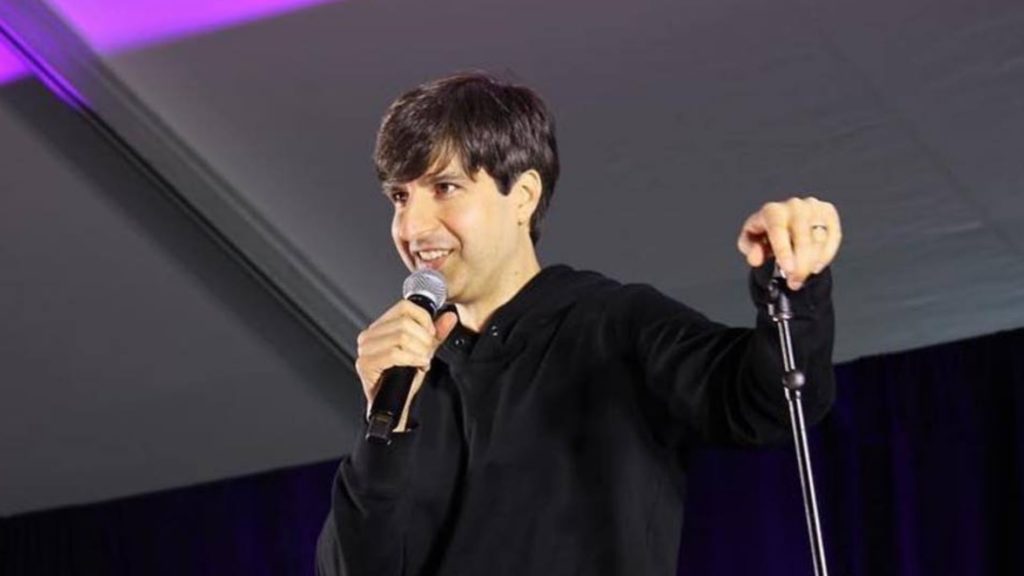 After waiting eight long years, Australian Demetri Martin fans will be able to see the Greek-American comedian perform his unique brand of surreal comedy when he tours the country early next month.

As well as being a comedian, actor and film maker, Martin is also a published cartoonist and musician but when it comes to his ethnicity he describes himself as a ‘watered down Greek’.

Born in New York, Martin is third-generation Greek American after his grandparents moved from Sparta and Crete to the US. Both his parents were born in Brooklyn but then moved to New Jersey and it was there young Demetri grew up.

The comedian’s family ran a Greek food stand on the New Jersey Boardwalk where a young Martin and numerous family members would work during the summer.

“It was a standard Greek American story,” he told Neos Kosmos from the US on the eve of his Australian tour.

“There was souvlaki, yeeros and funnel cakes. Then my family opened up a diner with my mum’s parents and my uncle. I grew up in the Greek Orthodox church and I was an altar boy until I went to college. I was also in the Hellenic Dance group of New Jersey.”

Unsurprisingly Martin revealed that, during his last visit to Melbourne, he couldn’t stop himself from sampling some of the local Greek food on offer.

“I remember trying a couple of restaurants and I thought it was delicious,” he said. “It’s obviously so far from where I am from but I felt the same warmth and certainly in really nice ways it felt very familiar and like home. The smells and the music and some of the characters I saw I felt like I really could spot people out. Like the guy with the komboloi and also the indentured servant who was a daughter, son or nephew working in the restaurant and I’m like, ‘I know you, that’s me. I know that person.”

Martin’s Hellenic upbringing didn’t end with food, as his father was also a Greek Orthodox priest who engaged the congregation in a most unusual way.

“My father was a very present public speaker,” he said. “Some priests would have a very well-prepared sermon that was double spaced and it was almost like reading an essay. But my father was not reading he was more fluid and he certainly got laughs. I remember a lot of the parishioners really, really seemed to connect with him and really seemed to love him. It was something I took for granted and it was only later that I understood that it was kind of unique and certainly his humour was, which was great.”

Unfortunately Martin’s father passed away when he was just 20 but he revealed how his Greek upbringing and seeing his dad speak at church ultimately inspired him to be a stand-up comedian.

“Just seeing my father and how funny he was, of course had an influence on me,” he said. “I spent lot of time with Greek Americans as a kid and I spent a lot of time in church. Where I found my sense of humour was in Greek school and as an altar boy. I had a lot of fun at Greek festivals, and summer camps with Greeks. I like the warmth and the heart of the Greek community where I grew up. They were very expressive.”

Despite many Greek influences surrounding him, Martin revealed that growing up he was shy about expressing his Hellenic heritage and it was something his mother teased him about.

“My mum used to give me a hard time, basically I wasn’t Greek enough or I wasn’t a good Greek because I didn’t lead with it,” he said, “A lot of people I grew up with, being Greek was your main trait. But also my parents were initially from a Greek community in New York and by the time I was around, my siblings and I we were a minority.”

Martin feels this upbringing made him more Americanised and even though he doesn’t do Greek related humour in his show, he maintains it’s not due to a lack of material in that area.

“There was a lot of Greek culture that I found funny,” he said.

“I could certainly tell a story of growing up as a Greek American and what it was like to work in the diner, and all my friends and their dads who had flower shops, a landscaping company or a deli. Sometimes when I’m writing down ideas and thinking about movies that I could make or even books that I could write, I think about talking about my background and who I am and who I identify as. Because I do think there is a lot of material there.”