Soula Vaitsis on her Paranormal Activities 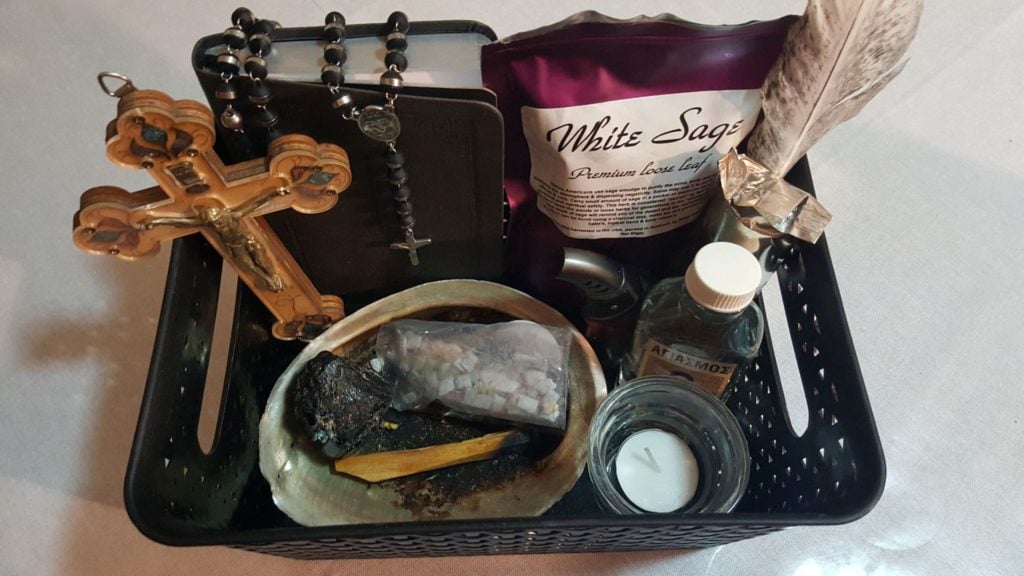 Surely, we have all wondered, at least at some point, what we are doing here, if there is an afterlife, if a God or higher entity exists, what happens when we die and if spirits can still communicate when they’re gone. So many questions and still no answers.

This world if far more complex than we are able to comprehend, consisting of seen and unseen ‘realities’ that we do not fully encounter, and if we do we are unable to classify as ‘normal’.
“My passion is the paranormal. I’m in the field that I want to be,” Soula Vaitsis says, even before the conversation begins.

“It all started when I was seven… the first experience that I had with a spirit. That’s my first memory.”

When it happened, Soula was out at the local park with her cousin. Her cousin was swinging and she was not. They both had ponytails and her cousin’s hair suddenly got pulled really hard.

“We were both swinging high and fast and then my hair got pulled and she said she didn’t do it. In that moment we both realised it was something else. We literally flew off the swings and started running.”

Soula recalls looking back and being able to see a woman one metre off the floor levitating in a white dress with her hands down.

“She had black long hair and I couldn’t see her face. Excuse my language, we sh*t ourselves! That was my first experience.”

Since then, Soula has generally been seeing more of the ‘darker stuff’, as she describes it. For years she was scared of her ability to ‘see’ that other side and even thought she was ‘disturbed” at one point. Her parents did, too.

“I saw that my father would pass away and it happened. Dolls and objects would move and speak by themselves even after I’d removed their mechanisms. Such things kept happening…. no matter how hard I tried to ignore it and I knew that I had to look into it. To learn… and as I learned, I got stronger and more aware.”

“I didn’t need to be afraid. It’s there for a reason. I just needed to know more about it?” she adds.
“When I lost my dad and it became more important to me to find out what happened when we pass away.”

ALSO READ: I went to a psychic and I did it all. The cards, the coffee cup readings; I had my aura checked. Here’s what happened.

So, she began to study the paranormal and the spirit world and started using equipment and investigating supernatural phenomena of that kind using scientific equipment and enlisting experienced psychics and mediums along the way. The more she looked into it, the more she would discover that these phenomena happen more often than people think or admit.

In the last five months, Soula put all of her experience in creating her own team and also into bringing other paranormal activities teams in Australia together. She is now the director of Paranormal Adventures Australia.

“My aim was making everybody know that if you need help there’s people like us around who can help, and we do it pro-bono. We’ve been doing it for a long time on our own, but now we have a place to put the ideas and experience we have in motion.”

“We also have a page for children on our website because there are a lot of kids that have a gift,” she adds. “Some parents think their children are disturbed and do not know how to properly help their child. Denial can affect children, their mental health; we have put things on the page that helps parents understand the gift and ask the right questions.”

Soula, aside from her personal experience, has met a lot of parents whose children are able to see the supernatural. She attributes it to this generation being more “in-tune” more empathetic. More connected to their surroundings. They are born more sensitive. Some children round the age of seven will lose their gift but most of them are keeping it, through adulthood.” Having grown up in a Greek family and as part of a close-knit community, she admits it was often difficult to come to terms with her ability. In the beginning she was convinced – as were here parents- that it was wrong and it had to be silenced and depressed. However, she believes that nowadays the Greek community and even people of the Orthodox faith are far more open and more open-minded.

“You’ve got your skeptics still, and it’s good to be skeptical. Then you also have religions that are skeptical but do believe in spirits,” she says. “Jesus for example is in spirit, therefore, when we pass away, we’re in spirit, too. Some people sit on the fence, some are true believers, but we don’t really know what happens to us when we are gone from this world.”

That is what Soula and her team of Paranormal Investigators are trying to figure out, “to break the barrier” as she likes to call it highlighting that there is no expert in this field, only knowledge and experience.

“We do not know everything about paranormal phenomena nor do we pretend to. If there was such a thing as a Paranormal Expert, we would have by now broken the thin veil between the living and the dead. Together, we hope to learn more about this unseen dimension, research to the best of our ability in the hope of gaining better and clearer understanding of the paranormal phenomena.”

Of the most common predicaments the team encounters are issues on land and in old buildings. Soula explains that before “calling-it” they try to eliminate any human error or external factors that could be causing that phenomena. That includes checking sound and temperature as well as looking through several cameras recording from different angles. Sometimes the process of monitoring a location can take several nights.

“It’s more likely to find a spirit in a 180 old pub than a cemetery,” she insists. “On the other hand there is Aboriginal land. A lot of Indigenous people were massacred. That energy is still here. We go to rivers where people have been drowned, murdered.”

“We always go in with respect and we try to acknowledge the spirit, be aware that it’s there. We then go in with cameras, recorders, temperature meters. When we can’t explain it, we say it is possibly paranormal activity.”

ALSO READ: Cosmic girl – Psychic Lisa Andreou speaks to Neos Kosmos about developing her abilities, her business and the reasons people turn to spirituality to rediscover themselves

Soula is adamant when it comes so safety. She always warns people, especially the younger generation, that the paranormal is no joke, often even deterring people from participating in her public investigations. Trying to communicate with spirits has to be done by experts and even then there she finds there lies a danger.

“Spirits have feelings, emotions, will, and can become negative entities when they have unfinished business. They are not going to come out just because we went there to remove them. They hiss, sometimes push, scratch people. We put them down as being demonic, however, these don’t happen very often. We have had incidents during public investigations where spirits pushed and attached people. When a person is ‘touched’ we try to get rid of it, carefully with the help of our mediums and healers. We make sure we have sage and focus on getting the negative energy off and out of the person so nothing follows them home.

“Sometimes people come along to have fun, so we make sure they don’t provoke the spirits as other people present might pay for it. Spirits are not always benevolent. Is it really a child that you’re hearing or a malevolent entity trying to lure you in? There is a higher risk when you actively try to communicate with spirits that can talk back to you.

“I’ve had calls from homes where the children, usually teenagers, got drunk, got a Ouija board and started calling on spirits… Then something happened, they got scared and left the board open. Then it gets thrown away by the parents and the spirit is still out, roaming the home and the people in it.”

Even for experienced ‘ghost-busters’ like Soula and her team, cleansing homes and removing spirits can be tough. Especially, if one has a full time job and a family to take care of.

“I can’t say it does not affect me during the day what I do at night. Even protecting yourself sometimes does not work (…) sometimes spirits latch on to us and we take them home with us. Because I’m a sensitive empath, it happens to me a lot.”

“I work as a state manage for a business during the day and what I do with the paranormal is free of charge. We don’t make money from it but we fund what we do through the ticketing of the public paranormal investigations, which have a more educational purpose.”

Soula says that many times she has to drive up to four hours out of Melbourne and back to attend to distress calls. Along with equipment and supplies (oil, sage, frankincense, etc), each expedition to identify a situation and resolve it can be costly.

“I don’t like when priests or psychics take up to $500 for a blessing and walk out the door. No. You are meant to help without a fee. Also, not everyone in distress can afford it,” she says.

“We want to make sure people are safe and that they can be helped and with so many scams out there we do not want to charge money. We wish to be respected as we respect each home or territory we are called to investigate and cleanse.”

*Ms Vaitsis is also the owner and director of the Australian Paranormal Conference And Expo set to take place in September 2019.