“As of tomorrow, the sky will be bluer, the sun will be brighter. A new day dawns for our country,” Mr Mitsotakis said 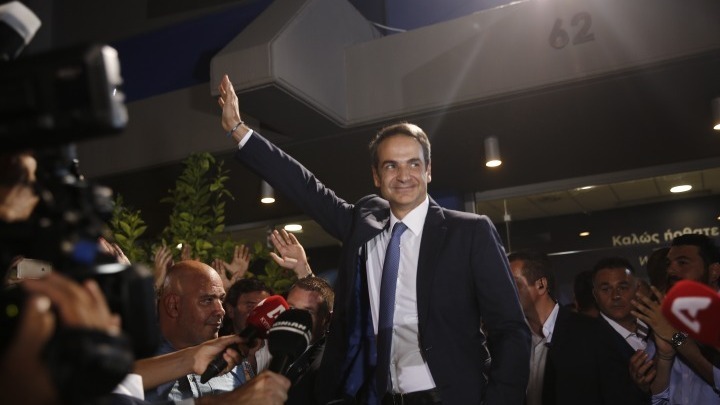 The conservative had a 39.6 per cent lead of the vote based on 73 per cent of votes counted against 31.6 per cent for incumbent Radical Left SYRIZA Prime Minister  Alexis Tsipras. Exit polls showed ND winning between 155 and 167 seats in the 300-member Greek parliament.

New Prime Minister elect Kyriakos Mitsotakis said he had a clear mandate for change, and he pledged more investments and fewer taxes. “I am committed to fewer taxes, many investments, for good and new jobs and growth which will bring better salaries and higher pensions in an efficient state,” he said, thanking voters for their generosity in giving him their support for a majority government. “ND’s victory is a victory for Greece and every Greek,” he said.

“I will be the prime minister of all Greeks. I will work to convince our fellow citizens who did not support us. We are too few to be divided and we have a lot to do together. I am taking over the governance with awareness of the difficulties ahead. I have faith in my abilities and I will complete my mission.

“I am aware of the difficulties. I draw strength from the people, from this great stream. [The result] was not an expression of their will to end a painful cycle. It was the desire to take our fortunes into our own hands. I feel the need to address the Greeks abroad. I will not ask you to return. I am asking you to turn your eyes toward Greece. From now on we are working to change the country you had to abandon. The Greeks deserve better.

“I asked for a strong mandate to change Greece. You gave it to me generously. I will not deny your hopes.

“Today I draw strength from my family, my wife and my three children. I feel my parents’ wishes protect me.

“Starting today is a difficult but wonderful struggle. The country proudly raises its head and we are rolling up our sleeves. The new government will work hard. The prestige of democracy and the institutions will be restored.

“I have promised to reduce taxes, increase investment, boost development, and create an efficient state. Transparency, accountability and meritocracy are returning to the country. Our national voice is becoming stronger in Europe. We are starting now. The parliament will work all summer.

“I am not asking for a grace period. We do not have time to lose. We are building a broad front of consensus.

“As of tomorrow, the sky will be bluer, the sun will be brighter. A new day dawns for our country.”

Mr Tsipras said he respected the will of the Greek people. “Today, with our head held high we accept the people’s verdict. To bring Greece to where it is today we had to take difficult decisions (with) a heavy political cost,” he said.

On Monday, 8 July the new Prime Minister will be sworn in.