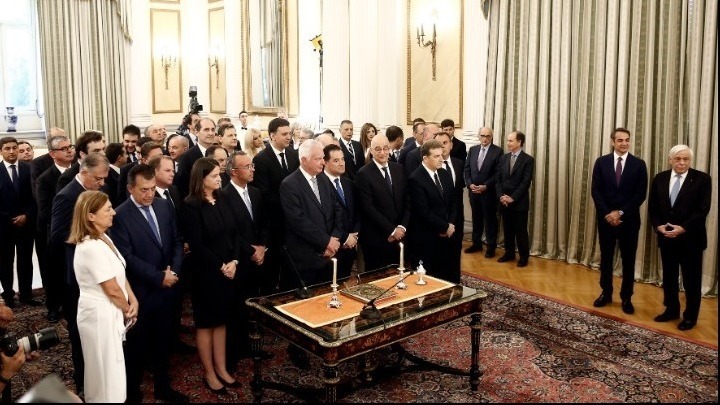 The new cabinet assumed their portfolios at handovers with outgoing SYRIZA ministers. Many of the ministers are already known from the previous ND government.

Their statements are as follows:

Greek Finance Minister Christos Staikouras: “Our main target is a high and sustainable growth rate with healthy public finances and a stable banking system,” he said, adding that the priority would be to ease taxes for households and enterprises and strengthen employment.  “We will keep the positive things and build on them to correct mistakes and oversights and we will make use of the ministry’s staff with meritocracy,” he said.

Development and Investments Minister Spyridon-Adonis Georgiadis: “We do not come to destroy but to build,” he said. His goal would be to bring about a rapid reversal of the economic climate and work towards an increase in the GDP for new jobs and social cohesion. He said that his predecessors legislative initiatives “also had my consent” and hoped that the main opposition would also work with him in consensus bearing in mind that he does not exclude the possibility of working on draft laws prepared by his predecessor Yiannis Dragasakis.

READ ALSO: What victory for Kyriakos Mitsotakis means for Greece’s relationship with the EU

Foreign Affairs Minister Nikos Dendias: He underlined that foreign policy required consensus on issues and national unity, while outgoing SYRIZA Foreign Minister George Katrougalos praised his success and agreed with the harsh criticism he had directed at the far-right fascist Golden Dawn party while he was in parliament.

Citizen Protection Minister Michalis Christochoidis: “Security is the greatest good because without security democracy rots; we are here to work hard to instill a sense of security in the citizens,” he said. “Everywhere in Europe, the migration policy ministry belongs with the corresponding Interior Ministry, as well as anything related to the country’s home security.”

New National Defence Minister Nikos Panagiotopoulos: He said it was “an honour” to be handed his ministry portfolio by his predecessor Evangelos Apostolakis. He said the new leadership’s goal would be “to retain, and possibly increase and strengthen the deterrence potential” of the Greek armed forces. “Greece does not challenge others, and seeks relations of stability and peace in the Balkans and the wider Southeast Mediterranean,” he said. “But it does not like to be challenged, and when it is done, Greece is obliged to respond with thoughtfulness, decisiveness and force, in order to avoid creating tension or appear vulnerable to challenges.”

Education Minister Niki Kerameus: The new minister said education is the “greatest investment that can be made in the country” since it determines both its present and future, adding that bold changes would be made in the sector “quickly and effectively without taking anyone by surprise.”

READ ALSO: Greek Elections 2019: They showed up by horse and warship in strange attire and with smoke grenades

Labour Minister Giannis Vroutsis: His goal will be the immediate approval of outstanding pension applications. As of 1 June, 2020, 34 per cent of all new pension applications will be approved electronically, doing away with the current processing delays. “The core of our social policy is to support the family in every possible way, while the Minimum Guaranteed Income will again be the basic tool for effective social intervention,” he said. “The Minimum Guaranteed Income will expand and we will we strengthen it to embrace the weak and vulnerable groups of the population, providing not only financial support but also guaranteed opportunities for reintegration into society and work.”

Health Minister Vasilis Kikilias: An orthopedics doctor himself, the new Health Minister said he would personally visit health institutions around the country to record problems. “We will be judged upon whether there are consecutive running shifts at the local hospital’s medical imaging room, whether we have sufficient medical supplies at hospitals, whether there is less trouble for people,” he said.

Energy Minister Kostis Chatzidakis: He put forth the government’s priorities in energy and the environment during the ministerial handover ceremony with outgoing Energy Minister Giorgos Stathakis. He said the top priority would be to help the Public Power Corporation, which he said is problematic despite efforts by managers and workers. Other priorities include completing the power grid connectivity across many Greek islands, completing all international natural gas projects, and the speeding up of hydrocarbon research and development. Emphasis would be given to renewable energy sources and better household waste management while completing the Greek Cadaster’s land registration and introducing a more efficient management for forests are also a significant priorities.

Culture and Sports Minister Lina Mendoni: The priority would be to revive the Athens centre through the revamping of the National Archaeological Museum. She would also work to complete the National Gallery of Art renovation project and focus on culture in issues of daily life, including climate change, social integration, education, viable development and investments. The ministry’s outgoing leadership spoke of improving efficiency and the legislative framework that used to weigh down the ministry and leave major monuments unprotected, protecting copyright, and introducing the e-ticket for archaeological sites and museums.

Justice Minister Kostas Tsiaras: “Justice should not be used as an arena for political clashes,” he said. He described justice as a pillar of democracy and stressed its independence.

Interior Minister Panagiotis Theodorikakos: A new election law that scraps simple proportional representation and allows Greeks abroad to vote in national elections, as well as measures that make municipalities more governable, will be among the first measures taken by the ministry. He said that there will be no layoffs in the public sector, adding that the aim of the new government is to serve Greek citizens and for the state to become associated in their minds with “an absolutely successful affair that serves Greek society”.

Digital Governance Minister Kyriakos Pierrakakis: “We are going full-on digital,” he said, while declaring a “war on bureaucracy”. He said “the digital transformation of the state is a basic priority of both the new government and the new prime minister personally.” Former Digital Policy, Telecommunications & Media Minister Nikos Pappas said his ministerial term paved the way for some important projects that should be seen through by the new leadership, and mentioned the Syzefxis II, or National Public Administration Network, which aims to interconnect 34,000 public administration entities and schools into a digital unified hyper-network.
Pappas reminded the project’s 630 million euros budget, the electronic circulation of documents between 21,000 public services and the digitization of 150,000 signatures of public officers.

Transport Minister Kostas Achilleas Karamanlis: He said that large-scale public works “should not exceed deadlines of five, 10 and 15 years. “Karamanlis noted that “things done the right way will be continued, while what we don’t agree with, we will change.” He also noted that public projects “need to be accompanied by feasibility and viability reports.”

Shipping Minister Giannis Plakiotakis: “Our priority is to form a taxation and legislation framework that is more friendly to shipping firms, in order to attract new investments and facilitate the establishment of foreign shipping companies in Greece,” he said, announcing the launch of initiatives to attract more ships to the Greek flag and referred to a renewal of the coastal fleet with the building of ships in Greece. He said the New Democracy’s (ND) priority is to upgrade the infrastructure and services at the country’s ports so as to attract more cruiseships and upgrade sea tourism.

Agricultural Minister Makis Voridis: He said that negotiating support of Greek farmers’ interests over the EUs new Common Agricultural Policy (CAP) is the priority of the Agricultural Development & Food Ministry. The new leadership raised the issue of climate change as the most outstanding problem expected to plague farmers in the future.

Tourism Minister Charis Theocharis: “Greece must return to a 4 per cent annual growth, and tourism has a significant role to play in this development,” he said, adding that tourism is a national issue. The new leadership pledged to focus on strengthening and safeguarding the tourism product. T