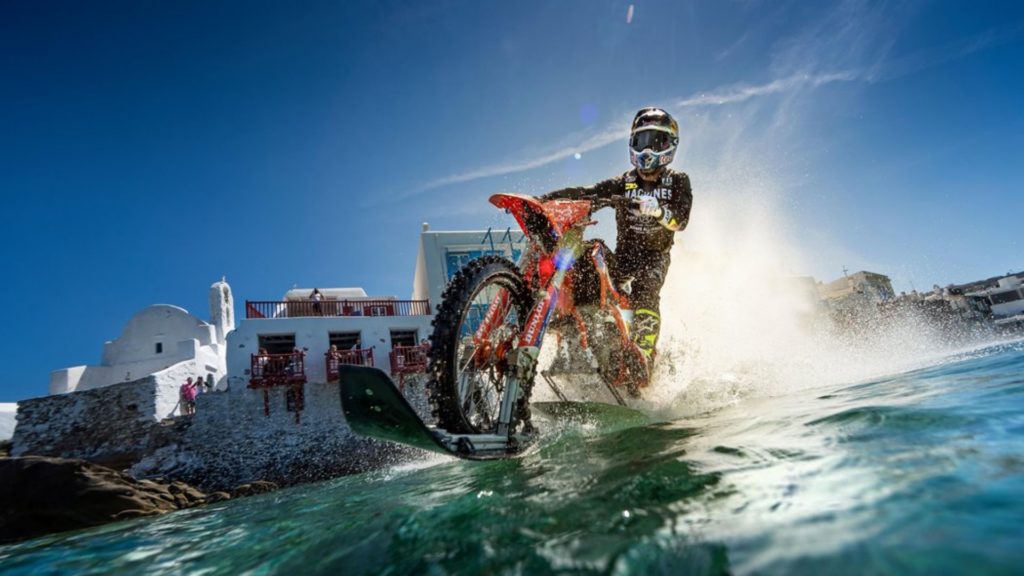 Freestyle motorbike legends Aaron Colton and Robbie Maddison unleashed a series of two-wheeled tricks, including a ride into the Aegean Sea as part of Red Bull’s Rippin’ Mykonos.

Seattle’s Colton is one of the world’s most versatile freestyle and stunt riders, while Australia’s Maddison has broken several world records. For both of them, the road to becoming top stunt riders has been littered with broken bones and nightmares.

Joining forces on Mykonos, the ‘island of winds’, they joined together to create dazzling spectacles. Riding from the picturesque white-washed streets of Chora to the Armenistis Lighthouse, they duelled together in a motorbike frenzy until the finish.

Colton started riding when aged two and is famous for his no-handed wheelies. He is famous for his surf rides (riding without holding the throttle and standing on the fuel tank). “In short it was awesome. I got to travel halfway around the world with my family to meet up with one of the best freestyle motocross riders in the world and collaborate on creating something that – once it’s done – we will remember forever.”

Maddison was brilliant as he rode without the help of ramps and clearly had an ace up his sleeve by riding his uniquely adapted KTM onto the clear blue waters of the Aegean Sea, which he had previously pulled off four years ago in Tahiti during the ‘Pipe Dream’ project.